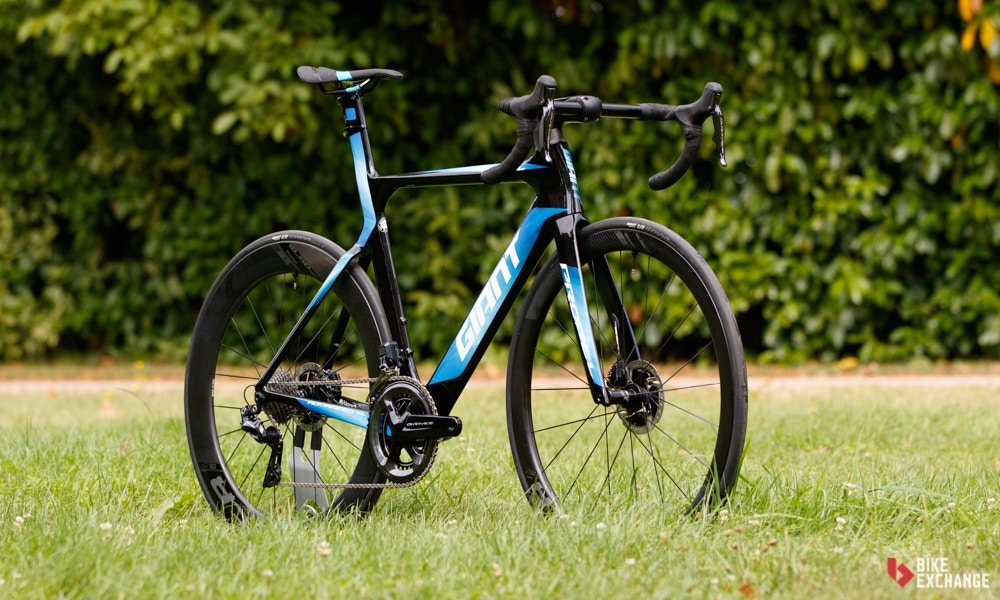 After teasing us with a glimpse at this year's Tour de France, Giant has officially pulled the covers off its new aero race offering, the Propel. The Propel range had remained largely unchanged since its debut in 2013, and while not begging for a redesign, Giant has left no stone unturned in overhauling its wind cheating race bike.

The culmination of three years of experimentation and testing, the Propel Disc is all-new for 2018. Scoring refined tube shapes for aero efficiency, stiffness improvements and as the name suggests, disc brakes, here are ten things to know about the Propel Disc range

While not officially launched until today, the Propel Disc was first spotted in the WorldTour peloton underneath eventual green jersey winner Michael Matthews in this year's Tour de France. Whilst the aero machine only got a few runs over the course of the three-week race, exposure in the world's biggest sporting event hinted that a launch was imminent and certainly got us all talking. 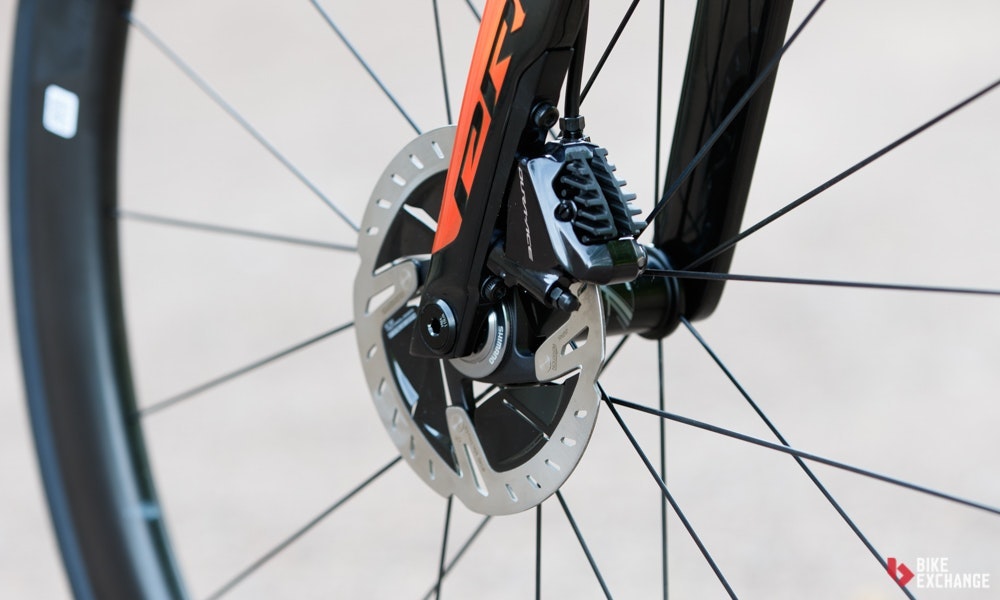 Poor stopping power has long been a point of criticism on rim brake aero bikes, however, braking woes are no more as the Propel range is now disc brake specific. In addition to increased braking power and better modulation, Giant claim that moving to discs produced a reduction in overall drag compared to the rim brake calipers used on the outgoing model.

The move to discs allows for increased tire clearance up to 28c, and sees quick release skewers swapped out in favor of thru axles. Giant have opted for a 12mm thru axles front (12 x 100m) and rear (12 x 142mm), as used successfully on the TCR Disc range. 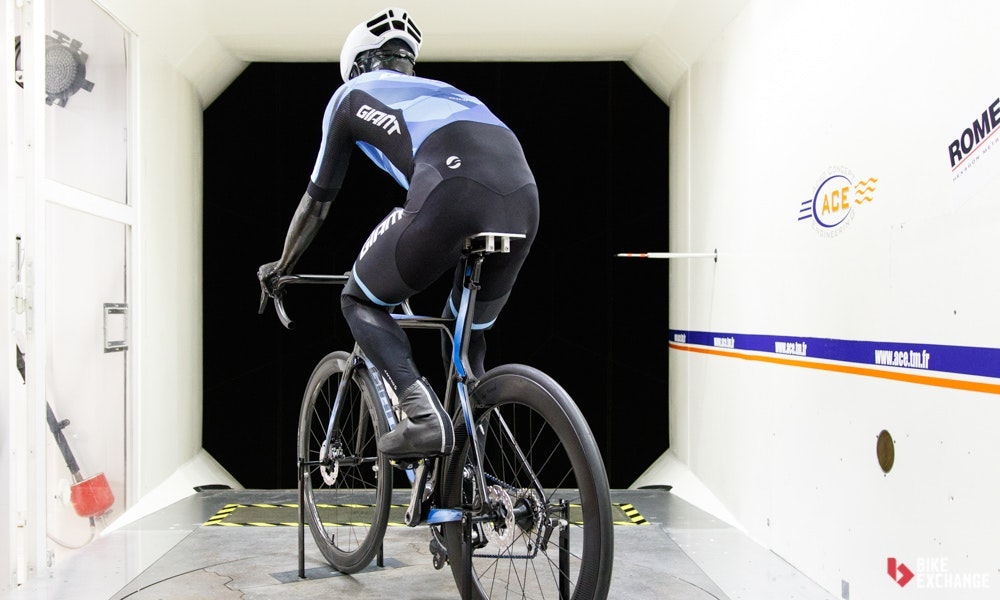 The outgoing Propel was no slouch when it came to aero credentials, however, Giant has upped the ante on the new model. Resigned tube shapes sees the 2018 Propel Disc save a claimed 15 watts at a speed of 40 kph over the previous iteration in simulated real world testing. The drag reduction is thanks to new airfoil sections which feature a “truncated ellipse shape”, which Giant claim consistently “offers a lower drag coefficient” than traditional teardrop shaped tubes during wind tunnel testing. Whilst initially designed for integration on the Propel range, the truncated ellipse shape, known as AeroSystem has also been effectively integrated into downtube of the recently released Liv Langma. 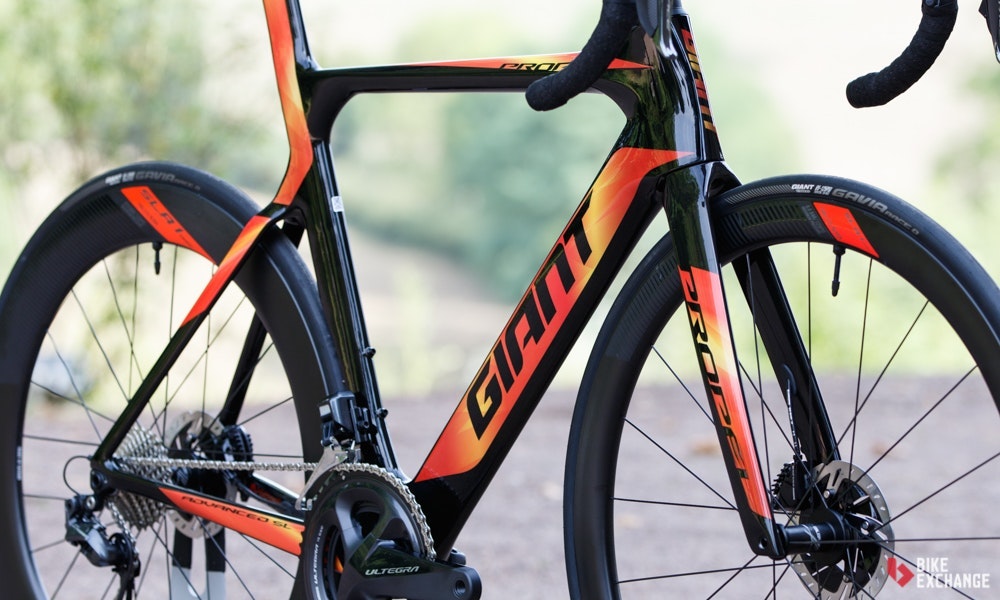 Giant claim that the Propel Advanced SL Disc is 35 percent stiffer than the outgoing model. Not only does the Propel see increases over the outgoing model, the new frame is said to be 40 percent stiffer over some of its key competitors. This frame stiffness is a culmination of a number of factors including the AeroSystem tube shaping, redesigned Vector ISP (Integrated seatpost) and disc specific fork. Giant claim this stiffness offers more pedaling response and improved cornering ability.

With a claimed frame weight of 982g and a fork weight of 378g, the Propel Advanced SL Disc comes in at just 45g heavier than the outgoing rim brake Advanced SL. This low weight combined with increased stiffness culminates in a class leading stiffness to weight ratio of 71.1g/nm. Giant claim this stiffness to weight ratio gives the Propel increased efficiency and power transfer out on the road.

6. Business in the front, party out back 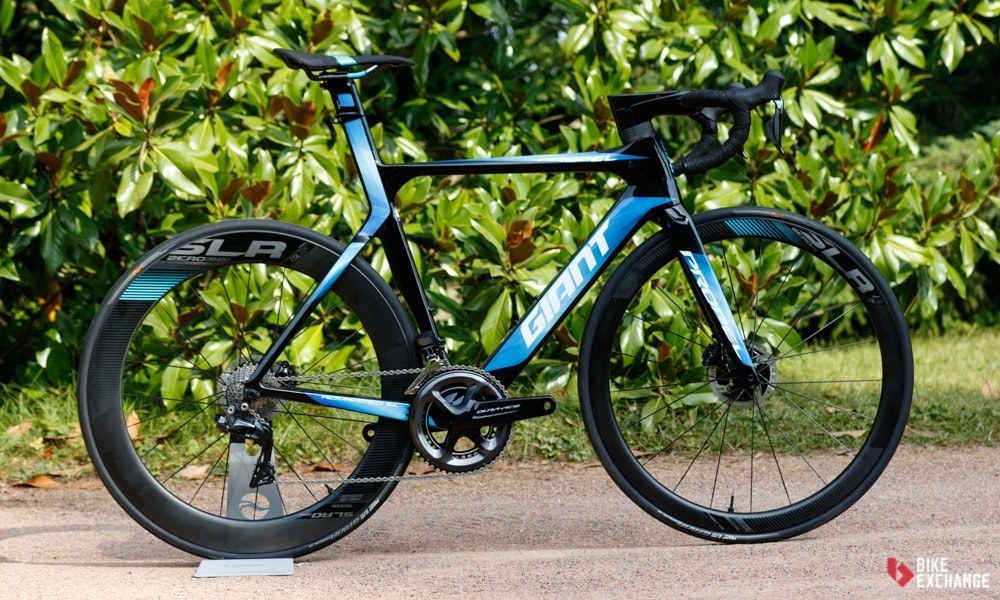 The entire Propel Disc range scores upgraded rolling stock in the form of Giant’s own proprietary SLR WheelSystem. Giant have opted for a staggered rim depth of 42mm (front) and 65mm (rear) which is laced together with aero friendly bladed spokes.

While the mullet look will polarize some, there’s science behind the decision with the staggered WheelSystem claimed to minimize drag without sacrificing the bike’s performance in crosswinds.

As seen peppered throughout the updated range of Giant road bikes, 2018 see’s a noticeable shift towards tubeless wheels and tires. Tubeless tires have long been praised for the reduced rolling resistance and increased puncture protection they provide. Thanks to the updated tubeless ready SLR WheelSystem and tubeless compatible 25c Gavia Race tires, every model in the Propel Disc range is tubeless straight from the box.

8.Integrated cockpits all round 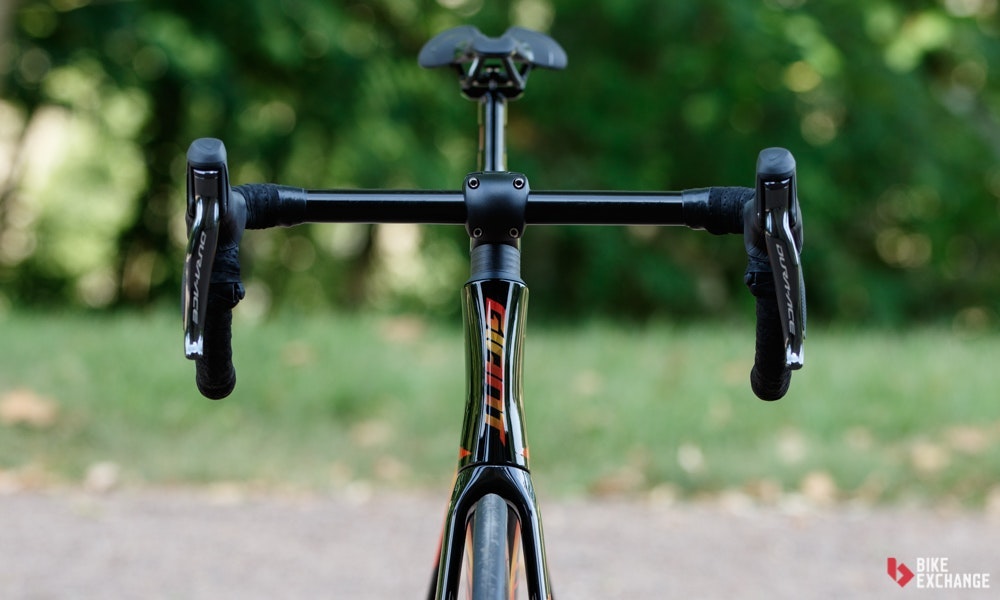 Beyond the new frame and updated wheelset, the most noticeable feature of the Propel Disc is the integrated two-piece bar and stem. Available through the entire Propel Disc range, the new cockpit tops off a clutter free front end, thanks to impressively integrated cable routing for Di2/mechanical shift wires, hydraulic brake lines, and the Di2 junction box.

As of publication, delivery dates are not yet confirmed. models and pricing are as follows.

For more information, head on over to CyclingTips for an indepth first ride review of the 2018 Giant Propel Disc

With the new Propel Disc so near, why not find yourself a bargain on a 2017 Propel? The BikeExchange marketplace has a number of amazing deals on previous year Giant Propel models available from leading retailers across the country.