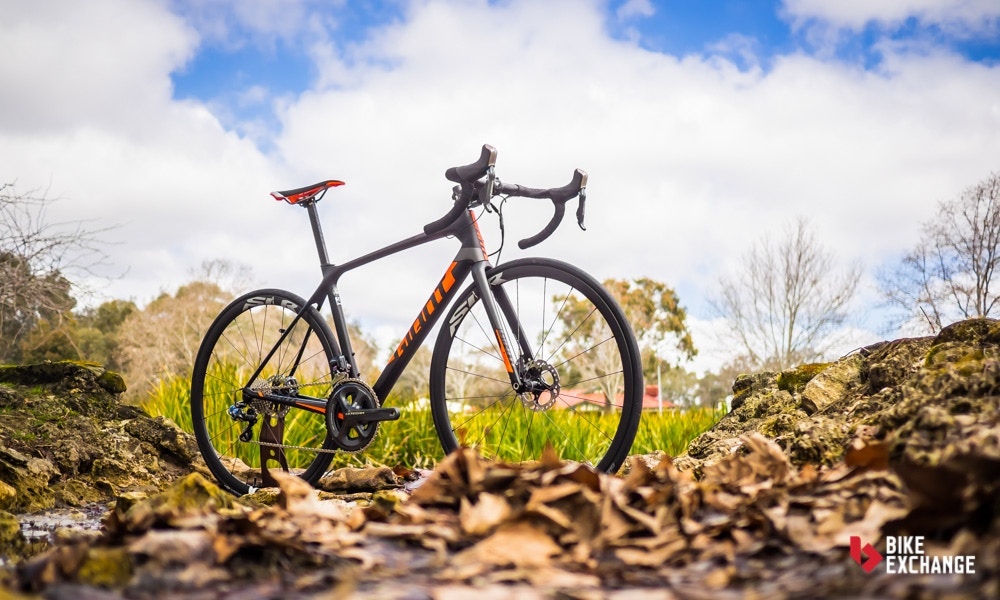 The 2016 edition of Giant's flagship performance road bike the TCR made huge strides forward in stiffness, ride quality and weight reduction thanks to a re-engineered frame. The 2016 TCR frame featured new tube shapes, less volume, a new variant seat post and was complemented by Giant's own proprietary SLR wheel system.

CyclingTips’ Australian tech editor Matt Wikstrom will be testing and reviewing the Giant TCR Advanced Pro Disc over the coming weeks. We were able to get our hands on the bike for a brief moment to take some shots and get an idea of what this bike is all about before Matt’s full review is released on CyclingTips. We also have full details on the entire 2017 Giant Road Performance line-up including model details, specifications and prices if you are interested in checking out the latest Propel, TCR, TCR disc or Defy. The mid-level Advanced Pro frameset features Giant’s 'Advanced Grade Composite' material that employs T-700 carbon fibre, an OverDrive 2 head tube and fork steerer, and a PressFit BB86 bottom bracket. The 'Advanced Grade Composite' sits below the top-tier 'Advanced SL Grade Composite', but still provides great stiffness and comfort at a class leading weight. The bike is essentially the same one Matt tested in late 2015 with the addition of disc brakes, electronic drivetrain and swaps out the SLR 0 DBL WheelSystem for the Giant SLR 1 Disc WheelSystem.

The new braking system uses Shimano RS805 hydraulic disc brakes with 140mm Centerlock rotors, which have required a new fork and rear triangle to accommodate them. The fork has changed to feature a thru-axle design which Giant says will 'help boost steering stiffness' and 'when combined with the OverDrive 2 steerer tube and MegaDrive downtube, the result is razor-sharp handling and cornering precision.' The 'PowerCore' bottom bracket and rear triangle has also been changed to accommodate for the flat-mount disc brakes but Giant state the disc ranges maintains 'the stiffness and efficiency that the TCR range is known for.' As mentioned above the wheelset is the SLR 1 Carbon Disc Road Wheelsystem which weighs 1,615g, features Sapim stainless steel spokes, is 30mm deep, 23mm wide and tubeless compatible. Tubeless wheels are beginning to appear more commonly on road bikes and Giant has gone all in for 2017 featuring Gavia SLR tubeless 25c tyres on its entire road performance range.

The saddle, stem and handlebars are all Giant's own 'Contact SL' and the seatpost is the non-integrated Giant Variant which is said to enhance compliance over previous models.

Rounding out this tidy package is the ever reliable and high performing Shimano Di2 Ultegra drivetrain. The modern 'mid-compact' 52/36 crankset is paired with an 11/28 cassette that should cover almost any profile. The only deviation from Shimano components is the KMC chain which Giant use almost exclusively on their bikes.

Matt is testing a medium which weighed in at 7.79kg without pedals or cages, marginally (or significantly, depending on how much of a weight weenie you are) heavier than the 2016 TCR Advanced Pro 0 he previously tested which tipped the scales at 6.53kg sans pedals and bidon cages. Considering the addition of disc brakes, a disc compatible wheelset and electronic drivetrain, it's easy to see where that additional weight comes from.

The TCR Advanced Pro Disc is available in six sizes, although only S, M, M/L and L are being brought into Australia and will retail for US$4,700 or AU$5,299. Keep an eye out on Cyclingtips.com for the full review.