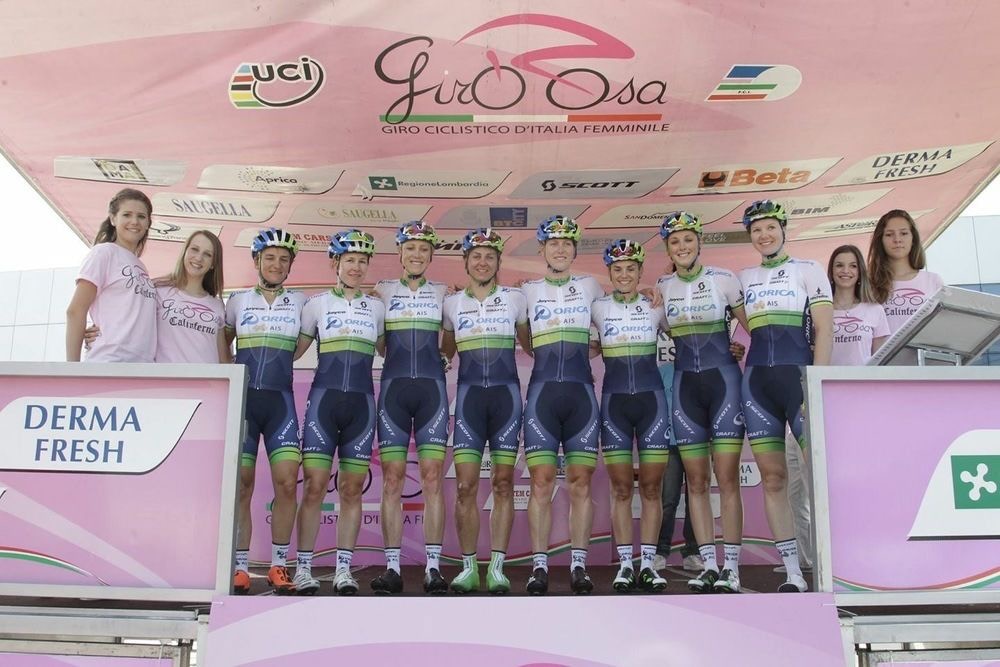 The Giro Rosa, or Giro d’Italia Internazionale Femminile, is well underway in Italy and the Orica-AIS team is putting up a mighty battle.

We caught up with recently-joined member and BikeExchange mate Rach Neylan to find out how things are panning out.

Rach had a brilliant start to the year earning herself a late signing to OGE in March. Since then she's been settling into the team well contributing to recent run of team success. Gathering race days now her form is on the way up she's feeling positive and ready for opportunities in the 10 day tour.

Going into the Giro Rosa the team strategy was less about GC and more about stage results. We’re not even at the halfway point yet and already it’s been a pretty brutal battle thanks to some scorching temperatures and plenty of spills on course.

As the Mercury rises to the high 30s and the course edges closer to some truly monstrous climbs, Rach is quietly rubbing her hands together.

“At last! When racing women in sub 40 degrees, rain and wind, they’re all well and truly in their comfort zone. I am looking forward to the temperature rising so I can be in mine!” she tells us.

Monday’s stage was brutal, no doubt about it. Some 37 degrees and no respite from a fresh breeze – all cyclists were in for a super tough slog. Rach was 10th showing promising strength in the tough conditions!

It’s early days but so far the Giro Rosa is proving a mixed bag for the Orica-AIS team.

It’s true they didn’t get off to the greatest of starts – Monday was a self-confessed disappointment for the team. But we were far from surprised when they turned it all around yesterday to produce a terrific result for home grown talent Valentina Scandolara, coming into 2nd place for the stage.

“To get Valentina to that podium place required all of us each making moves to deliver her to the finish line. We were really proud of that race – it showed that we could come back firing,” said Rach.

“Orica-AIS is a strong and aggressive team – this Giro campaign has brought together really tough riders and that fierceness is starting to show,” she said.

Rach attributes some of this to the ‘gelling’ of Orica-AIS’s recent training camp in Tuscany.

“We spent plenty of time together training in Tuscany and getting to know each other a lot better. And then in the six weeks following we achieved six podium placements from various riders. Four of these were wins to four different riders. Any team would have to be pretty thrilled with those kind of results,” said Rach.

“I’m really proud to have raced in three of those four one day wins. It’s pretty awesome,” she said.

Another big plus for Rach has been coming into such a professional outfit for this season.

“I’m used to battling in smaller teams – making my travel arrangements, organizing my bike, taking care of my meals, finding my own accommodation and masseuses. Here I’ve found myself arriving and been greeted with a perfectly dialed bike from a mechanic, soigneurs take care of massaging, I’m handed a towel and refreshments at the finish line – it is a totally different experience and one I am definitely not taking for granted,” said Rach.

Such comments draw stark attention to the differences between male and female racing at the pointy end, but it’s not something that deters Rach.

“I see it as an opportunity. There’s a pretty big race happening over in France right now and it’s getting a lot of attention. But people are jumping online looking for riding news, and with that they come across what’s happening here,” she said.

“It’s like starting this year’s Giro Rosa in Slovenia. We were so well received by locals and the race drew really big numbers. Spreading it out and into other countries is encouraging. The more cities we can take women’s bike racing to, the better.”

We look forward to hopefully more updates from Rach during the remainder of this year’s Giro Rosa.

Thanks Anton Vos for this great pic of the women!