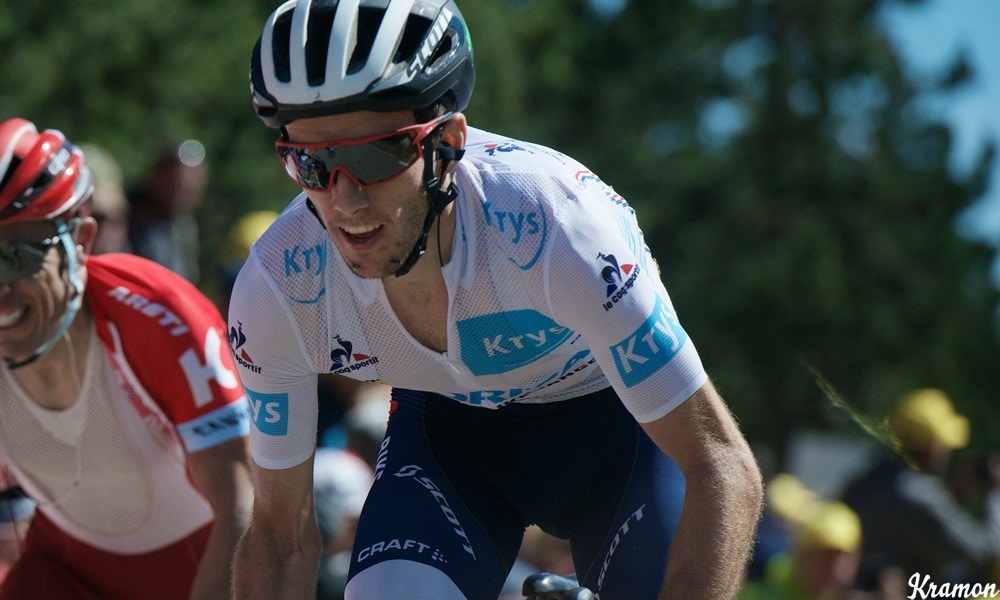 When the dust settles, when din of the crowd fades and the riders head home from Paris, one of the standout points from the 2016 Tour de France will be the performance of Adam Yates. Riding only his second Tour and aged just 23 years old, the Briton was one of the big highlights.

Yates rode far above his experience level to hold a top general classification place for much of the race, sitting second overall for several days before a final overall position of fourth.

He also took the white jersey of best young rider and signposted his potential as a possible future Tour winner.

However, as much as his riding impressed, his general approach to the sport was equally notable. Thrust into the spotlight and performing better than many expected, many others would have felt considerable pressure in his shoes.

“In one sentence, I would probably describe him as cool as a polar bear’s toenails,” said his fellow Orica GreenEdge rider, Chris Juul Jensen.

The Dane has been with the team for seven months and got to know him well in that time. They were roommates on the Tour and Juul Jensen saw Yates up close when the eyes of the world were upon him.

“For a rider with such a young age, he comes across as being incredibly mature and relaxed,” he told CyclingTips before stage 15. “He hasn’t really seemed to let this whole circus of the Tour de France distract him, despite being in the white jersey and currently on the podium.

“He seems very determined, as we all do when keeping the white jersey. It is actually quite impressive to experience how well he takes it all in his stride.”

He followed those performances up with victory in last season’s Clásica de San Sebastián, and was runner-up in another WorldTour event, the Grand Prix Cycliste de Montréal.

His Tour ride, however, is at another level. Many past winners shone at a young age in the race, with Laurent Fignon, Greg LeMond, Marco Pantani, Jan Ullrich, Alberto Contador and Andy Schleck all taking the white jersey early on.

Yates’ victory in that classification puts him in some very good company and suggests that he could be a future Tour champion.

However, despite that potential, his team deliberately held back heading into the race. “HE REALLY HAS THE BIG PICTURE IN MIND”

In Saint-Lô on July 1, one day before the race started, Orica GreenEdge laid out its goals for the Tour. Team management made clear that one thing was being targeted, namely stage wins.

The general classification was not a consideration, it insisted, with the riders under no pressure to achieve in that direction. That was repeated on several occasions during the race.

Despite that – or maybe because of the absence of pressure – Yates soon found himself in a strong GC position overall. He attacked over the top of the final climb on stage seven to Lac de Payolle and gapped the big guns. Although he crashed when the final kilometre banner deflated just as he went under it, losing time to those other GC riders, the exceptional circumstances of the incident saw the race jury decide to give him the time he had with three kilometres to go.

This catapulted him up into second overall and also into the white jersey of best young rider. He held both for the next few days, ending up in the same position on the first rest day in Andorra.

Speaking then, he was remarkably laid back. “I knew the condition was good and we did everything we could to prepare the best way possible, so it is nice to be in that position. But as I said from the beginning, GC was never an objective. It was always stages. We are going to continue like that for the rest of the race. Anything in the GC is a bonus.”

The words were remarkable, but to too the body language. As Juul Jensen would later say, Yates was completely relaxed about the position he was in, and never got bogged down in pressure.

General manager Shayne Bannan said that maturity was not unexpected. “I’m not surprised by it,” he told CyclingTips. “I think he really has the big picture in mind. He understands that this is a pathway, it is a progression.

“I think you are going to see him develop into a fantastic cyclist of the future. But he gets it, he does. He is thinking about long term.”

Paris-Roubaix winner Mat Hayman was also quick to praise his approach. “He is relaxed and laid back. I think that is a really good quality that you need as a GC rider,” he said. “At the same time he is fiercely competitive. There is a real fight there. He can be a bit brash and cocky as well, but it is not on the surface.

“He is pretty confident, but if you just ran into him on the street you wouldn’t really see that. He’s a super hard worker, dedicated and I think the reason why he is doing so well is because of that. “

Although Yates was unsure how his form would hold up in the next period of the race, he continued to ride with style. He very nearly ended up in yellow on Mont Ventoux, initially being told he had the Maillot Jaune after Chris Froome was delayed by a crash.

However although that would have been a huge career highlight, he said that the circumstances of the crash meant that he wasn’t satisfied. His assertion that it rightfully belonged to Froome was shared by the race commissaires and another adjustment to the race times was made.

“Nobody would have wanted to take the yellow jersey like this so it’s a good decision the jury has taken,” he said afterwards, again showing exceptional maturity. “WE HAVE MANY YEARS AHEAD OF US”

Yates said more than once that he would lose many minutes in the time trials but things went better than expected. One day after Ventoux he rode the Le Caverne de Pont d’Arc time trial, netting a solid 18th. While he slipped a place to third overall, he held onto the white jersey and said he was fine with the result.

He then remained in third overall until the stage to Saint-Gervais Mont Blanc, where a mechanical problem cost him a lot of energy and saw him drop to fourth. He remained there until the end of the race, finishing four minutes 42 seconds behind winner Chris Froome (Sky) but just 37 seconds behind the runner-up Romain Bardet (Ag2r La Mondiale).

Nairo Quintana (Movistar), twice second in the Tour and a past winner of the Giro d’Italia, was just 21 seconds faster over the three weeks. This too is a measure of Yates’ potential.

“We have many years ahead of us. I learned a lot of things, I gained a lot of experience and I am sure I will be back in the future to try to improve and go one step further.”

Bannan shares that confidence. “The way we have seen Adam ride makes you really understand what a superb talent he is,” he said. “As to what type of a character he is, he is pretty unassuming. He is generally pretty quiet.

“Being from Yorkshire he is determined and shows a lot of really good competitive attributes. He is a pretty nice guy to be around.”

“He is pretty quiet, but he is possibly one of the people I have roomed with who laughs the most. He is very easy going,” he said.

He again emphasised his relaxed nature. “He is conserving energy whenever he can. He is not really letting it get to him, he doesn’t get stressed. He doesn’t lose his temper. Like I said, for a guy like me who is constantly running around with ants in his pants, I can learn a lot from a young guy like Adam.”

Hayman has also noticed the same attributes. Like Juul Jensen, he pointed out that the younger rider showed his more experienced teammates how they should approach things.

“I think he and his brother [Simon Yates] have been at the top of their game for years. It is part of their personality. What makes them good is you have to be in that relaxed frame of mind. They are very driven too at the same time. Relaxed, but driven at the same time. It is a good combination for a GC rider.”

Yates will now begin his recovery from the race, allowing the hard kilometres raced to bring him on. He will compete on the Great Britain team in the Olympic Games in Rio and could perform very strongly there.

Longer term, his Tour performance will naturally raise expectations about how he can do in the future. He is determined to continue progressing, saying that he is clear on what is needed.

“A bit of everything, really. Time trialling, climbing, staying out of wind on the flats. Everything. I gained some vital experience this year and I am sure I will be back in future,” he said.

The big question, of course, is if he can follow in the footsteps of other white jersey recipients and go on to win the Tour overall.

Unsurprisingly, given how he approached this Tour, he’s keeping his feet on the ground. “It is hard to say. Anything can happen,” he said, refusing to make predictions.

“I will keep working hard and training hard and I am sure I will be back in the future to try to go that one step further.”

Given how his 2016 Tour went, few would bet against him.