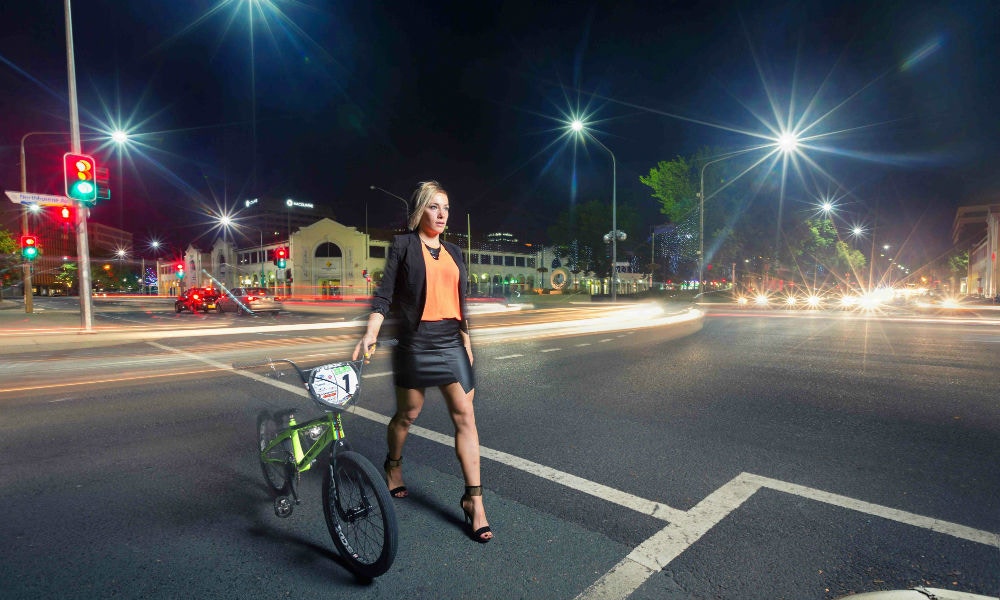 Like plenty of others, I’d heard about Caroline Buchanan before I met her.

With a list of sporting and personal achievements that makes the mind boggle, her reputation precedes her. When I first met her, she reminded me of a petite version of Pink and I instantly thought, man this chick rocks.

It wasn't until I started to dig a bit deeper and find out more about the person behind the brand that I realized just how much she’s punched and packed into a pretty young life.

By the time Caroline was five years old…

There probably wasn't a tree in the nearby pine forest that she hadn't scaled, or a jump that she hadn't taken on her bike. It was all thanks to her brother Sam, senior by three years, and her constant shadowing of him as she not only kept up with his fearless antics, but created plenty of her own. Whereas other girls her age were practicing pirouettes, Caroline was perfecting leaps on her bike off ramps and into water. In her mind, it was a pretty charmed life but as she grew up, it attracted the wrong kind of attention from her little peers.

“Be yourself because everyone’s always taken,” her mum would say.

She took her mum’s advice and kept doing her own thing. The family drove past a BMX track in Kambah (a suburb of Canberra), they stopped and they checked it out. No time at all later and Caroline, Sam as well as their dad were all racing BMX. Their mum would drive them around from race to race, track to track.

It was a family affair and it was the making of a champion.

By the time Caroline was nine years old…

Her parents sat her down for a chat.

She was BMXing at National Championship level, about to get a black belt in tae kwon do, showing real potential in the pool at swim squad, and her tennis was taking off as well. Then there was that other carrot – the opportunity to race the World Championships in Paris. But even Caroline probably couldn't do them all at the one time… It was a no-brainer to the little BMX bandit – Paris it was! And so began a lifetime of international racing and travelling.

By the time Caroline was 12 years old…

Her family home, and her nearby grandmother’s home, was completely destroyed by the Canberra bushfires.

The Buchanans had enough time to grab their bikes, and nothing more. They relocated (with grandma) to another suburb and continued to race BMX. They might have still been receiving relief packages with life essentials like toothbrushes and undies, but at least they had each other and their bikes.

Six months later Sam suffered a horrific accident that left him a quadriplegic on track and a paraplegic (thankfully temporarily in the end) in hospital. He’d shattered his C3 and C4, which were later fused together and followed by years of rehab. The older sibling who’d been responsible for lighting the BMX fire in Caroline’s belly could no longer race; his injuries left him too vulnerable. It was the closest of close calls. As an adult the full severity of ‘what if…’ would revisit Caroline when stars like Tara Lane (whose pre-loved bike became Caroline’s first ever BMX) and Renee Junger became permanently paralyzed from shocking spills off the bike.

By the time Caroline was 13 years old…

She’d traveled to and raced BMX in five different countries, including Australia. She’d exchanged kangaroo pins with little fellow BMX bandits from all over the world, made pen pals and met girls who – later on in life – she would battle it out with at the very highest levels of the sport.

There was no question – Caroline was going places on her BMX, but she was also still in high school. She enrolled at Canberra’s Erindale College, a school that catered for and developed budding athletes. Michael (Bling) Matthews was amongst her cohort, and Caroline remembers a day when they were both assessed in a test for an early talent identifier program. They finished the test and both puked. They were accepted to the next level.

Check out Bling doing his thing...

By the time Caroline was 23 years old…

She’d not only mastered BMX, but mountain biking had become a passion as well, and she’d become:

Short of breath reading that? By the time Caroline is 25 years old…

Far out we can only begin to imagine what else she will have achieved.

Rio’s on the cards – she’s gunning for gold at the Olympic Games. She’s working to really advance her Next Gen Girls Race Team and help them to and through World Championships, her Signature Balance Bike has taken off and she has big plans ahead for other merchandise, and there’s serious talk of her developing a BMX park with a mountain bike element…

This chick rocks. Keep up if you can.