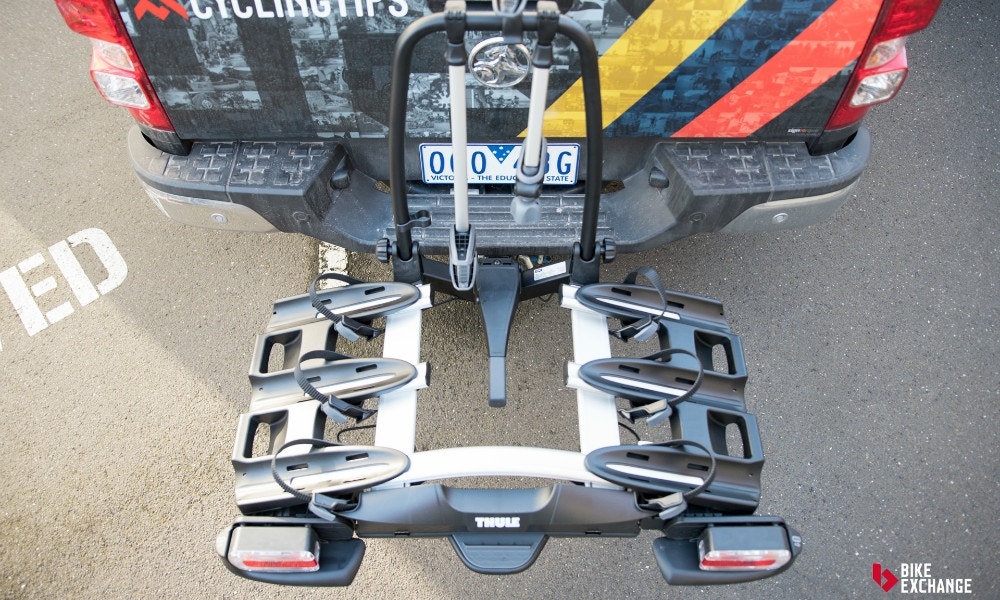 The Thule 927 VeloCompact tow bar bike rack is a simple to use, easily adjustable bike carrier that is capable of accommodating up to four bikes while still allowing access to the rear of your vehicle. The unit is straightforward to install and remove, making it a breeze to pack down when not in use or brought out for the occasional trip away.

What we don't: No torque setting on the locking arms, adds significant distance to the rear of the car. A tow bar bike carrier has many advantages over a roof rack system; for a start it's removable. It's potentially cheaper, especially if you don't have existing roof racks to install a bike rack onto. And it removes the need to lift bikes above your head, which is problematic if the bike is heavy or you struggle to reach above the car. On the flip-side a tow bar carrier obviously requires a tow bar, can add significant distance onto the end of your vehicle and requires constant removal and installation as most of us wouldn't keep it on the vehicle when not in use.

As a result, the demographic requiring a tow bar mounted bike carrier is probably somewhat limited to those that take the occasional trip with their bikes, a family that has multiple bikes or like us, those that simply enjoy a weekend away with mates riding in new locations.

Keeping all of that in mind, in order for a tow bar bike carrier to work it needs to be easily assembled, take little time to install, carry multiple bikes of varying sizes and provide great security, all of which the Thule 927 VeloCompact can lay claim to.

The frame comes fully assembled and all that is required is to attach the frame holder arms, plug in the electrics and away you go, it really is that simple. The tow bar locking mechanism works via a centrally located lever arm that is pushed down once you have lowered the frame onto the tow bar. We had to fiddle with the tension to get a solid connection but again, simple and straightforward. Once the lever arm is down and the frame is in place, you can lock the whole thing which makes it incredibly difficult to steal, and once your bikes are locked to the frame they become secure as well.

The whole carrier weighs 18.9kg and is rather bulky at 72cm long and over a meter wide (103cm). As a result moving it around and mounting it initially was work, and might even take two people due to the size. When you factor in the length of the tow bar, the carrier and bike handlebars, you're looking at over a meter added to the rear of your vehicle. It also makes for a challenging task of trying to store it away between uses. The carrier is designed for three bikes of varying sizes with an optional '4th Bike adapter' that allows an additional bike. Bikes are secured to the frame by traditional straps that hold the wheels in place and an 'arm' that connects to the bikes top tube and keeps it upright. These too can be locked providing piece of mind when leaving the bikes unattended on the carrier.

Regardless of whether you are carrying road, mountain, triathlon or even kids bikes, the 927 VeloCompact can cover it. The wheel holders are adjustable and easily moved back or forth to accommodate bikes with varying wheelbase lengths, the only potential issue is that all wheel holders move when adjusting which may present a problem if there is a large discrepancy between the bikes wheelbases. With a 60kg carrying capacity, it would be hard to exceed the limits of this rack with regular bikes. The fixing straps are long enough to accommodate most mountain bike wheels and deeper profile carbon wheels, however Fat Bike wheels are beyond the limits. The tube clamps are varied in length to help easily identify which arm is to be used for which bike. A dial is used at the clamping mechanism to adjust the pressure on the top tube which along with the straps, hold the bike securely to the carrier. The contact sections of the tube clamps are basically flat so they don't fit precisely around odd shaped tube profiles but nevertheless they feel secure. Our only gripe is the lack of torque setting which could lead to frame damage if you over-tighten.

Given the close proximity of the bikes, careful consideration needs to taken when racking multiple bikes. If all racked in the same direction handlebars will likely rub, potentially cranks too. This presented more of an issue with mountain bikes compared to road bikes as the handlebars are far wider. You quickly learn the best orientation for fitting your own bikes.

Once the bikes are secured the whole rack tilts to allow easy access to the boot or rear of the vehicle. A simple foot lever system removes the need for heavy lifting or cumbersome removal of the bikes to gain access to the contents of the boot. The bikes will tilt well beyond 45 degrees providing plenty of room to lift out big items. This was a huge tick from us. Included in the package are tail, brake and indicator lights as well as a handy plate holder as the rack covers the rear number plate. The electrics work via a simple plug and play set up as long as your have the safety light power output. The cords present a small issue when tilting the rack back and forth, as Andy explains below, but this is a small issue that is easy to workaround.

If you do opt to mount a fourth bike be aware that it adds some weight and cost. The additional holder costs AU$295 and adds 2.7kg, plus the weight of the bike, which is capped at 15kg. An additional lockable clamp is used to secure the fourth bike. As mentioned above, a tow bar mounted bike carrier adds distance to the rear of your vehicle, adding a fourth bike even more so be aware when parking or reversing as it's easy to underestimate the actual extra distance the carrier adds.

The Thule 927 VeloCompact will cost around $800, a fourth bike adapter costs an additional $250 and Bike Ramp additional $80. That's fairly pricey when compared to Thule's roof mounted carriers which start at $150, but is significantly cheaper than the EuroClassic G6, another three bike tow bar carrier from Thule. The 927 VeloCompact is 'Thule's most compact and lightweight bike carrier' for everyday use of three bikes, caters for a wide variety of bike types and sizes, and is completely lockable, three compelling reasons to justify the price tag if the general high build quality weren't enough.

The team over at CyclingTips used the 927 VeloCompact carrier for their recent trip to the Victorian High Country. Loaded on the back of their station wagon was a rotating line up of three Cyclocross bikes and two E-bikes. To get an idea of how the vehicle handled while loaded up with bikes, we went straight to the source.

Mal: "I'd say it was pretty solid. We had it fully loaded with two heavy e-bikes and we were mainly going over bumpy gravel roads. I never felt that it bounced noticeably or swung."

Andy: "Agreed. Almost entirely positive experience. The fold-down function was really useful, and the whole thing is easy to install and remove (handy, because it's likely you'd throw it in the boot while riding). The fact that it was low to the ground was perfect for the E-Bikes we were using, they are 25kg+ and wouldn't have really gone on the roof. Only negative was that it's possible to pinch the lighting wire when folding the rack back. We did a few times (until we realised to look out for it) and had to perform some bush mechanics on it."