The Tour Divide: The Hardest Bike Race on Earth? 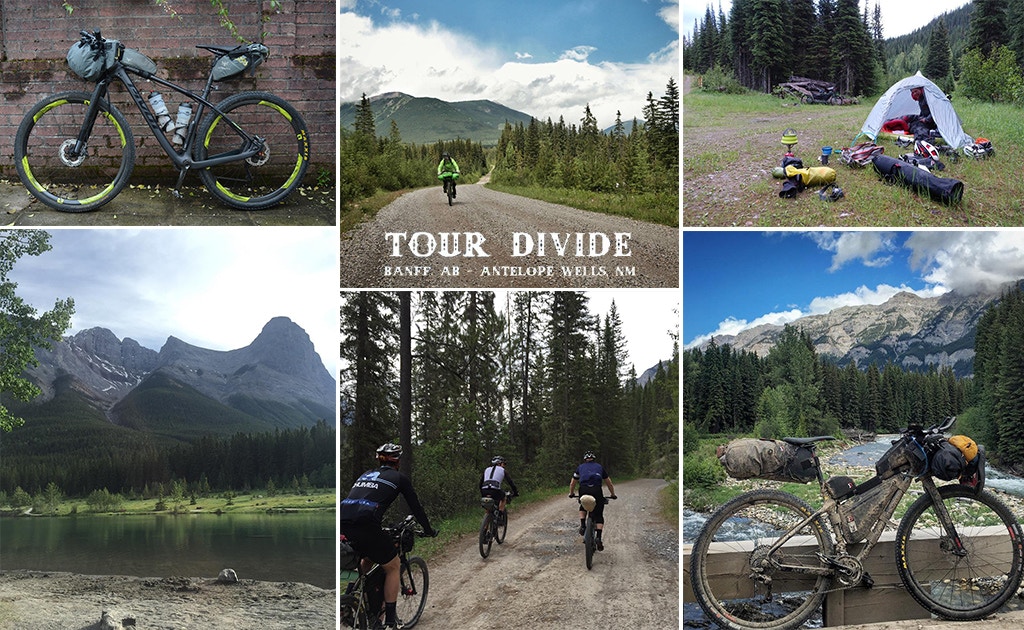 There’s been plenty of excitement in the past week as the riders of the 2016 Trans Am settle in for their solo trek across the United States. But the Trans Am isn’t the only solo ultra-endurance bike race happening in the U.S. at the moment. The Tour Divide, an unsupported mountain bike race from Canada to the Mexican border is a few days old and there’s been plenty of action already.

Jesse Carlsson was runner-up in the 2013 edition of the Tour Divide (and winner of last year’s Trans Am) and in the following piece, Jesse introduces the race, some of the riders to watch, and fills us in on the first three days of action.

The Tour Divide is often called the Grand Tour of Mountain Biking but it’s a little different to the road Grand Tours. Some call it the most difficult cycling race on Earth. Here’s why.

The 4,500km course starts in Banff, Canada and criss-crosses the Continental Divide through numerous U.S. states to the Mexican border outpost of Antelope Wells, New Mexico. It’s a predominantly off-road course made up of forest roads and dirt tracks over mountain passes in the North American backcountry, meaning riders have to know how to operate in wilderness areas dense with grizzly bears and other wildlife.

The course isn’t marked and it is a self-supported race – riders navigate with GPS devices, carry all they need to survive and find food and water along the way. A GPS beacon provides a location for each rider, with those locations plotted on the race tracker. Thousands around the world turn into “blue dot junkies” watching the riders make their way along the course.

The clock doesn’t stop and there are no prescribed stages meaning riders sleep very little and ride a lot with the winners riding more than 300km per day.

Bikepacking races have increased in popularity in recent years following the “adventure bike” trend and catalysed by social media. The Tour Divide was given wider appeal following the release of a documentary movie “Ride the Divide” in 2010 which covered the event.

Once upon a time spectator sports could only take place in stadiums – now they take place on the internet. Thousands of race fans follow rider locations and marvel at the incredible distances covered and remarkable feats of sleep deprivation. This is all enthusiastically discussed on forums and covered in Facebook groups – race tactics, stories of adventure and photos of riders captured by “super fans” out in the field.

The 2016 Tour Divide began on Friday (June 10) with roughly 150 starters, 11 from Australia. The race has developed a huge cult following and its key protagonists have superhero status in this underground community. This year the field is arguably the strongest yet. Here’s a rundown on the dots to watch.

Kato won the 2015 Tour Divide against a strong field in a thrilling final sprint to the border in New Mexico. He started the 2014 event but retired after breaking his leg. His comeback win in 2015 was completed in a record time of 14 days, 11 hours. The finale involved Kato passing the two lead riders while they slept, and sprinting 200km through the desert to victory with almost real-time video updates on social media.

Mike Hall has two Tour Divide finishes under his belt. He won the 2013 event in the fastest time along any version of the Tour Divide route, including detours at that time. Josh Kato beat Hall’s time by only minutes last year.

Mike’s bikepacking experience is second to none. It includes the fastest known unsupported ride around the planet and a win in the 2014 Trans Am, an all bitumen 7,000km unsupported race across the United States. With his experience and results Mike is the clear favourite.

Liam Crowley is a 38-year-old Irish-Australian. He enjoys bikes and long, long rides. His favourite part of a ride is when his legs finally start working after 12 hours. Then it’s time to go faster.

Crowley completed the Tour Divide in 2013 missing out on third by a couple of bike lengths in a sprint finish. He is approaching the 2016 event with cautious optimism. Knowing it is easily the strongest field to date, he’s excited to take on the challenge and get to Mexico as fast as possible using the experience he gained in 2013.

Seb Dunne is a 30-year-old adventure-loving actuary. Previously an orienteer and adventure racer, he turned his focus to cycling after meeting his wife Beth, an endurance cyclist also from Canberra. Endurance MTB racing soon escalated to stage racing including events in Alice Spings and Mongolia.

Dunne is taking on the Tour Divide for a second time after the worst mechanical in the 2015 event. He sat between second and fourth for the duration of that race and was a real threat to win until he snapped his fork in the rugged Cruces Wilderness of New Mexico. Dunne got his bike repaired and continued on with his wife, who was also racing, to finish the event.

Gareth Pellas is a 31-year-old Melbournian, who has “found bikes to be an ideal way to stave off adulthood for as long as possible”. He’s really only been riding bikes for five years and mountain bikes for two. Last year he rode a 3,000km bikepacking event called the Japanese Odyssey that spanned Japan’s four major islands from North to South. More recently he completed the Great Dividing Trail race in Central Victoria. He’s is a riding buddy of Liam Crowley’s and they have done a lot of riding together preparing for Pellas’s first Tour Divide. He’s looking forward to the breathtaking high country and the kinship of a few hundred people taking on the same adventure at the same time.

Jackie Bernardi is in her mid-30s and turned to cycling following a rock climbing accident. She’s raced in a number of Australian bikepacking events including the Cloudride 1,000km race in the mountains surrounding Canberra and the Great Dividing Trail Race in Victoria. THE RACE TO DATE

At the 82 hour mark Mike Hall is in Wise River, Montana. He has blown the race apart, covering 1,226km in that time with only seven hours of rest. Hall holds a 60km lead over Josh Kato. Gareth Pellas is the best-placed Australian, 153km behind Hall in fifth place, and is battling Achilles tendon issues. The fact that Pellas is riding ahead of the standing record pace indicates the quality of the field.

Liam Crowley is the next best of the Australians, still riding in the top 10 and battling knee issues after an incredibly fast start where he sat alone in third place after 48 hours. Already the race has been full of drama. Both Mike Hall and Liam Crowley have reported close calls with grizzly bears. In his relaxed style, Crowley reported that “a large grizzly bear stood up and waved to him”. Crowley has also lost his phone on course.

Second-placed Josh Kato was forced to jump from his bike to avoid a car in the remote Canadian wilderness, damaging his leg. It doesn’t appear to have slowed Kato too much though, but he has been resting more that Hall in an effort to recover.

In news of the other Australians, Seb Dunne has pulled out with a chest cold. It was brave for him to start with it. Australian Hugh Harvey has also scratched from the race with knee issues.

Meanwhile, Mike Hall charges on. He is not carrying a phone with him which means he’s interested only in a record time. His only information on gaps to his competition will come from race fans who find him on course. If he holds his current pace he will lower the record significantly, bringing it under the magical two-week barrier; a record that will surely stand for some time.