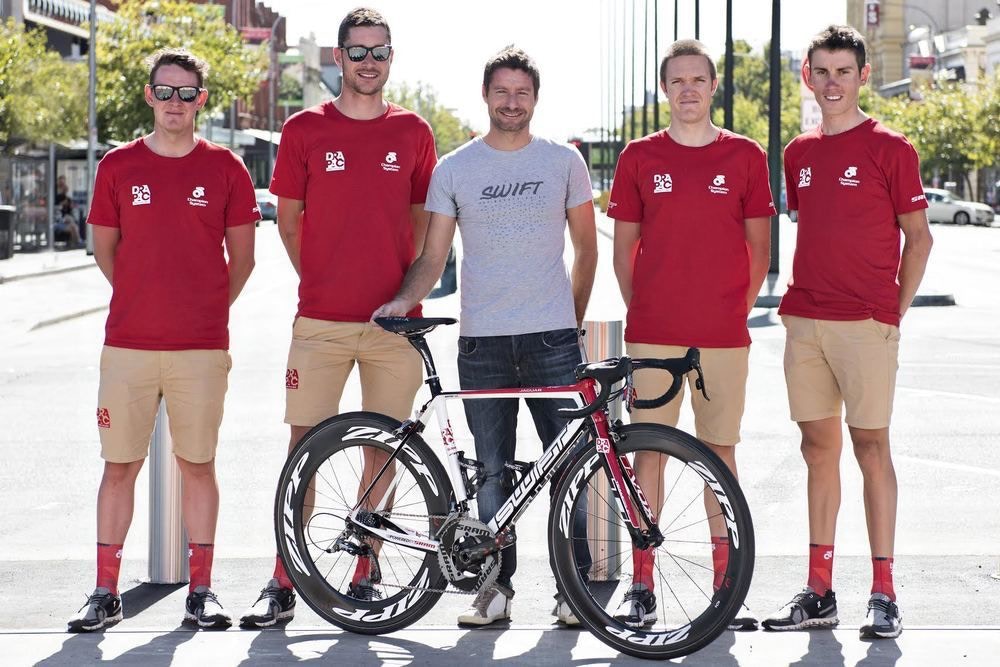 It’s no hidden secret that many a bicycle these days is manufactured in Asia.

Some of course might be assembled in the country of their brand’s origin, but by and large even the highest quality bikes most likely comprise of some parts originally fabricated in Asia. It’s a story shared throughout the industry.

SwiftCarbon has a pretty original slant on how the tale is told, however.

It didn't quite all start in a little café in Xiamen, but that’s where we’re picking up the story for now. Zambian born, former South African pro rider Mark Blewett just happened to be in this café for work. He and his Chinese business partner had some years before started manufacturing nylon bags from a factory out of the busy industrial city in South Eastern China. A local pulled up on his BMC and the two struck up a conversation based around the bike.

‘You realize it’s made here, don’t you?” the local said to Mark. “I mean here, here. In Xiamen. Our city is the second largest manufacturer of carbon material in all China,” he boasted. Mark balked. He’d been making trips to the city for some time and had no idea what was under his nose this whole time. He started further investigations.

Back in the 1980's Taiwan had won many a manufacturing contract with the US for carbon related material for the shipping industry. Seeking means to keep costs down, factories began to pop up over the channel in Xiamen. The 80's were of course experimental years for carbon and the bike industry, but it didn’t take long for that relationship to take off like it was propelled by rocket. It wasn’t surprising that Mark’s finger wasn’t on the bike manufacturing pulse at the time. To be fair, Mark hadn’t wanted much at all to do with cycling for quite a while there. That’s of course all changed – thanks in part to Xiamen – but there’s a reason why he was a little jaded…

We have to remember that as a kid growing up in the 80's, it wasn’t a case of jumping on the internet to download every ounce of bike related news and info available at fast-flying keyboard fingertips. Heck – the keyboard back then was still something attached to a cumbersome computer bigger than a microwave. No – any enthusiastic young rider had to really seek out the sport. Mark first came across it via the television, pretty much bang on when Hinault and LeMond were having their legendary tiff through the killer mountains of France. Mark got caught up in it all – he was hooked by this magical sport. He couldn’t get enough – late-arriving magazines from the US didn’t satiate his desire to soak up more.

It didn’t take long for him to start spending serious time in the saddle. But his increasing athletic prowess came with a glass ceiling – the global response to South African apartheid meant local teams were unable to compete at international levels. Despite this restriction local teams at the time certainly gave things a healthy nudge; they might not have been able to compete with foreign counterparts but that didn’t stop them raising the bar high indeed. By the age of 19 Mark was racing four Tours a year, each of seven – 10 days duration. He was ‘this close’ to living the dream. Mark’s break came in 1992 when he was invited to race in England’s iconic Milk Run. It was the first time a South African sports team had been able to compete outside the isolation caused by Apartheid policy. That year marked the start of Mark’s incredible journey in cycling. He got signed with a Continental team, Blagnac Toulouse (a development team for pro team Castorama) and based himself in Belgium, where he lived on Nutella, bread, cheese and ham.

Cue the Hollywood soundtrack and emotive voice-over – Mark was truly about to start living his dream. All those years ago when he was a bright eyed kid entranced by Lemond and Hinault, here he was about to start realizing it himself. He had visions of becoming the first South African to race the Tour de France; it was within reach.

But we don’t need a Hollywood script, because the world of pro cycling has done a good enough job of its own creating the kind of story-line that probably leaves high-income earning script writers wishing they’d come up with it first. There’s nothing to tell that hasn’t already been written, reported and dissected the world-over. But Mark got a seat to this real-life film; he signed with a Portuguese team and watched as his dream – and the reputation of world cycling – began to erode. Whereas once upon a time racing was an invitation to discover the world and achieve greatness, now it just started to seem like one terrible disillusionment.

Mark didn’t touch the bike for some three years. He didn’t go near it. It took some time for the bike to win him back over. In a way, that fleeting café conversation helped rev things up again. A qualified industrial designer, Mark began toying with designs for bikes. He started to get hooked. Prototypes started coming out of a Xiamen factory and they were really, seriously impressive.

Mark and his business partner came to a line in the sand. Either they took these designs to the next level and really threw themselves into this, or they let it go completely. Every line in the sand calls on a swift response, which is literally and figuratively what the two got. Mark moved to Xiamen, a third business partner entered the story and things rapidly escalated to the next level; SwiftCarbon was born.

This month marks the one year anniversary of SwiftCarbon bikes in Australia, a company that prides itself on delivering bikes that combine modern materials with an echo of those quality old cycling days. In Mark’s words, the last thing the world really needed was another company manufacturing carbon bikes. But he’s gone to great lengths (literally – he’s the one on the factory floor taking testing the frames when they’re almost still-warm from their molds) to produce bikes that feel the way he wants to feel when he’s on that perfect ride. The kind of bike that you don’t even think about when you’re riding, because everything’s just going so smoothly and stably.

There are seven models in the SwiftCarbon fleet:

The first Australian SwiftCarbon store is managed by former Drapac cyclist Jonathan Cantwell and after the strong performance it looks like we can expect to see more store frontages for this brand in other Aussie markets (there are now dealers in Sydney and Perth as well). The company is two years into a three year partnership with Drapac (riding Ultravox), a team whose focus on life success on and off the bike resonates with Mark.

And life in China? It feels like the center of the riding world; this is where it all really happens. The researchers, the engineers, the designers; this is where all their work is realized and we – riders around the globe of all level and ability – reap the rewards.

The riding can be spectacular.

According to Mark, once you get through the industrial ring of Xiamen it’s a 7 mile trip that takes you back 200 years; the concrete jungle’s replaced with rice paddies and working water buffalo. Although the country might produce the majority of the world’s bikes, it doesn’t yet deliver the same ratio of riders however, according to Mark things are changing. Certainly the lion’s share of the population still prefers riding as a leisurely sport to do in a relaxed fashion with friends, or a means of getting from A to B. But change is afoot; the high-end rider is being enticed out of the shadows with lucrative age group races that deliver enviable coin (Mark mentions a 80 mile amateur race in his area that offers $140,000 for first place).

Living in Xiamen means Mark can keep atop of everything; he’ll be at the factory ironing out kinks, pouring over designs alongside their other Dutch designer, and basically doing the kind of all-hands-on-deck jobs you’d expect of a business in its infancy. But it’s intense living, and it can drain the batteries fast, so Mark is thankful for opportunities that get him out of the city smog and into other markets around the world for a recharge, before returning to the pointy end of the bike building world.