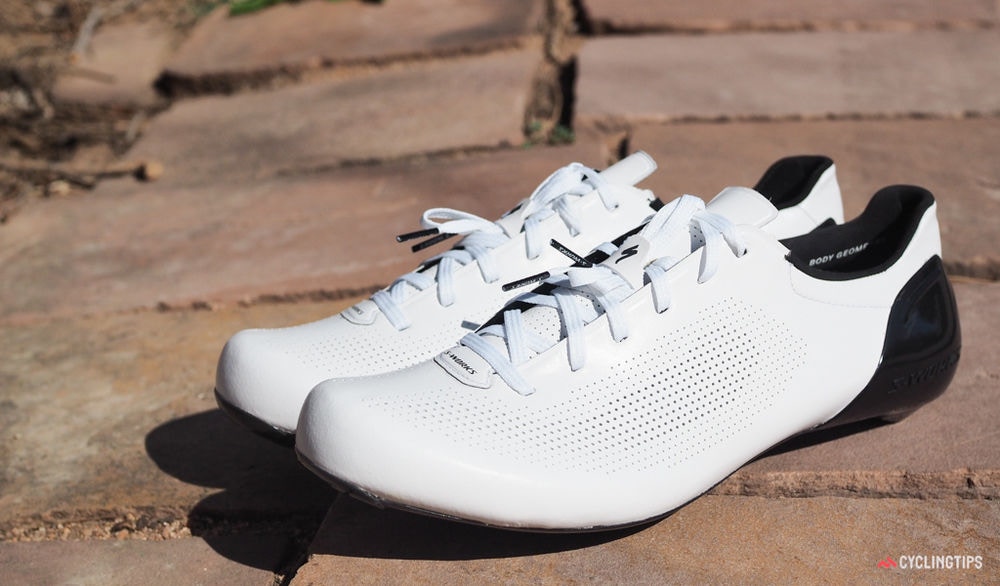 WHAT ONCE WAS OLD IS NEW AGAIN — BUT BETTER

Back in 2012, it was widely accepted that mechanical closures of some sort were virtually a requirement for any serious cycling shoe but Giro tossed that notion out on its ear when it launched the original Empire. Instead of buckles or dials, it used good old fashioned laces and a simple one-piece upper that — at least at the time — seemed to many like a laughably simplistic throwback.

But the Empire was no tribute to nostalgia with its thoroughly modern carbon fiber plate and synthetic upper materials. A pair of size 43.5 shoes weighed well under 400g, they maintained their fit over time (and when wet), and the soles were so thin that Giro had to include shorter cleat hardware unless you were comfortable with bolt shafts jutting up into your feet.

Three years later, not many of those early critics are laughing now. Not only does Giro’s current road shoe range now include half a dozen lace-up models but even top riders such as Bradley Wiggins and Taylor Phinney have jumped on the bandwagon.

Not surprisingly, more than a handful of other companies have since followed suit with their own lace-up shoes — including Specialized with its new S-Works Sub6.

Specialized haters love to hate, of course, and at first glance, you would be forgiven for assuming the S-Works Sub6 is a straight-up knockoff of the Empire with its similarly classic aesthetic, one-piece perforated microfibre upper, and 384g actual weight for a pair of 43 shoes (just 10g heavier than the numerically bigger but identically sized Empire SLX).

Put the two shoes on, however, and they couldn’t be much more different.

Giro can be credited for bringing laces back into the forefront of high-end road shoe design and while the Specialized S-Works Sub6 and Giro Empire SLX share some traits, they feel very different.

DON’T JUDGE A BOOK BY ITS COVER

Whereas Giro goes for a distinctively softer, suppler feel and a narrower European-style Sidi-like fit for its Empire range, Specialized has opted for a more progressively shaped last and more structure for the S-Works Sub6 — and which one suits you best will obviously come down to personal preference.

Specialized borrows the Sub6’s carbon fiber sole plate from Boa-equipped S-Works 6 sister model with substantial arch support baked right into the mould whereas the Empire uses a flat plate and softer arch support provided by the foam insole. In typical Specialized style, the plate also features a slight wedge beneath the forefoot that rolls your feet slightly outward.

Specialized claims this yields a more powerful and natural-feeling pedal stroke — and at least in my case, that holds true. However, it’s worth noting that if this varus wedge geometry doesn’t suit you, there’s no good way to cancel it out without affecting the overall fit of the shoe. Specialized builds a ‘varus wedge’ into all of their road shoes so the inner side of the sole appears thicker than it is in practice.

Despite omitting the standard S-Works 6’s fancy Dyneema non-stretch panels, the uppers on the Sub6 nevertheless follow the same structured theme. While the Empire’s internal heel cup is comparatively flexible, the S-Works Sub6 is built with a very rigid external heel counter that radically pinches down around the base of your Achilles tendon. Even with the laces tied less than uber-tight, heel hold is rock solid.

Unfortunately, those tight confines – plus the slower operation of laces in general – also make the S-Works Sub6 an absolute bear to get on to your feet (and Specialized is uncharacteristically missing out on a grand marketing opportunity by not including a branded carbon fibre shoehorn). That dramatically tapering shape won’t sit well with everyone, either, especially if your heels are on the wider side of average.

Once they’re on, the Sub6 shoes are supremely comfortable with all of the usual accolades associated with good lace-up shoes applying here. With six pairs of eyelets and a standard criss-crossed lacing pattern, pressure is nicely distributed across your foot for a more even and sock-like feel than any shoe I’ve used with mechanical closures. Fit through the midsection is appropriately snug but the toe box is wider and more squared-off than on the Empire — and if you need more room, some Sub6 sizes are offered with a wider last. The tapered heel counter shape makes these hard to get on and off but you quickly forget about the inconvenience while riding.

The Sub6 also does well in terms of ventilation. There may not be any mesh panels but the uppers are generously perforated so they’re actually quite airy in hot temperatures. There’s also a sole vent underneath the toes but I can’t say that I actually felt any air coming through there.

Elastic loops sewn into the tongue keep the laces neatly tucked away but if you prefer an even cleaner look, you can use the included Warp Sleeve covers that not only wrap up the entire midsection but also improve the shoes’ aerodynamics, supposedly saving 35 seconds over 40km as compared to a 2015 S-Works shoe, at least according to Specialized. That may very well be but the sleeves are so difficult to put on (and take off) that you’ll need those extra seconds to catch up to your riding buddies who will invariably get tired of waiting for you and leave you behind on your weekly group ride.

Needless to say, I usually left them behind. The included Warp Sleeves yield a super clean exterior for what Specialized claims equates to 35 seconds of savings over 40km. That may be but they’re a total pain to put on, too.

Anyone considering the S-Works Sub6 will likely not only be comparing them to the Giro Empire but also cross-shopping the standard S-Works 6 shoes so it’s worth taking some time to compare those here.

As previously mentioned, both shoes use the same carbon fiber sole plate and heel construction so not surprisingly, they feel identical in both areas. Likewise, both use the same last shape so the overall fit is identical, too.

That said, there is one key distinction. Specialized now has two S-Works road shoe models: the standard S-Works 6 (top) and the lace-up S-Works Sub6 (bottom). They’re similar in many ways but different in others.

Those space-age Dyneema panels that Specialized adds to the S-Works 6 shoes essentially form a paper-thin cage around the ankle — not unlike what Nike tried to do in plastic a decade ago. Combined with the S-Works 6’s dual Boa ratcheting cable reels, you can really produce an unyieldingly secure hold around the base of your feet should you so desire. Those panels really don’t stretch a bit over a time, either, so if it’s an ultra-tight fit you want from hour one to hour six, so be it.

With the high-tech Dyneema panels of the standard S-Works 6, the Sub6 feels slightly stretchier overall, particularly around the ankle. It’s also much more difficult to produce the same level of tightness with laces as with Boa dials. You can still get the Sub6 plenty tight but it’s more like ‘very snug’ as opposed to voluntarily cutting off circulation to your toes.

As expected, the standard S-Works 6 shoes are heavier at 440g per pair (size 43) — as expected, but still very light for a shoe with mechanical closures (for reference, a pair of high-end Sidis are typically upwards of 600g).

AND THE WINNER IS…

As always with cycling shoes, what works best will ultimately boil down to fit. But after having spent considerable time in all three models described here, my money is on the S-Works Sub6: they’re just as light and comfortable as the Empire while offering better support; and they’re nearly as supportive as the standard S-Works but at a lower weight and with a more luxurious feel for long days in the saddle. Hate on Specialized all you want but these are very, very good shoes. Laces once seemed like an archaic throwback to a bygone era but the reality is that they make for a supremely even fit across the top of your feet.