Seven talking points from the 2016 Tour of Flanders 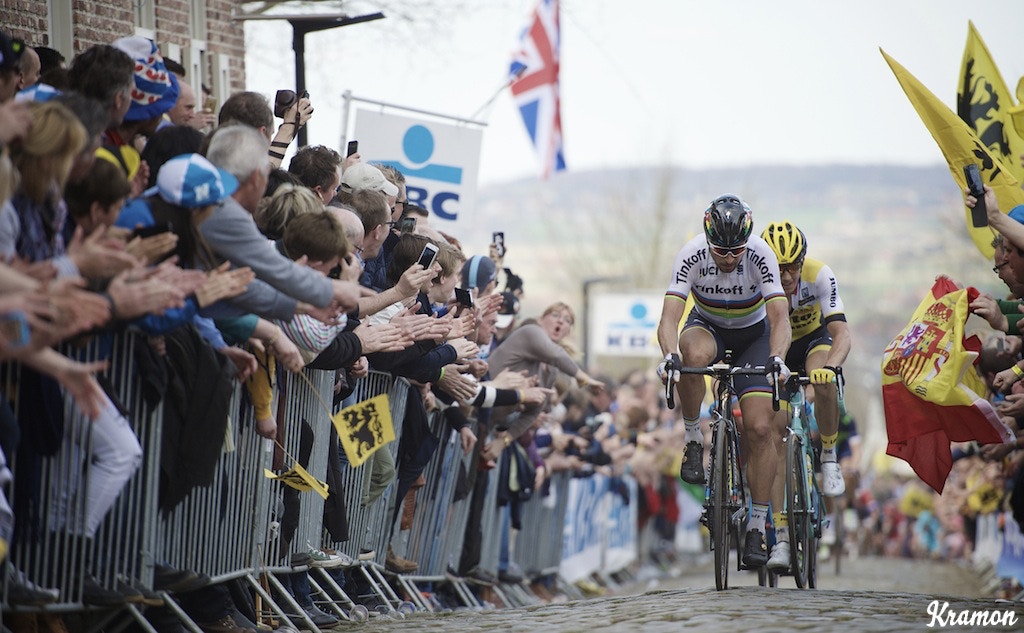 On a fine Spring day in the north west of Belgium, the world’s best Classics riders gathered in Brugge to begin one of the world’s greatest one-day races: the Ronde van Vlaanderen. What followed was six hours of entertainment, culminating in a thrilling solo victory to world champion Peter Sagan (Tinkoff).

Here’s what we’re talking about after the 100th edition of the Tour of Flanders.

The first few times Andre Greipel (Lotto Soudal) went on the attack at the Tour of Flanders it was something of a novelty. Here was one of the sport’s greatest sprinters attacking from the bunch and getting up the road to reduce the burden on his teammates behind. It was Greipel’s way of repaying the hard work done to support him, race in race out, throughout the season.

A few years on and Greipel’s attacks have become somewhat expected, but they’re no less entertaining. Despite still suffering from a rib injury, and despite saying he wouldn’t be up to his usual antics this time around, Greipel went on the move with a little less than 60 Miles to go yesterday, bridging across the breakaway and then attacking from there as well.

The German would ultimately be caught when the contenders came out to play, but it’s hard not to admire Greipel for his intent and his attitude. Greipel is first up the infamous Koppenberg after attacking from the breakaway.

If nothing else it’s a reminder that, just because you’re a particular type of rider, it doesn’t mean you can’t play a different role for your team every so often.

Narrow roads, an abundance of road furniture, the desperate battle for position ahead of decisive climbs – all of these factors ensure the Tour of Flanders always has its fair share of crashes. The 2016 edition was no exception.

Conventional wisdom suggests it’s best to position yourself close to the front of the peloton to avoid the majority of crashes. But crashes still happen there, as BMC found out the hard way yesterday.

What a crash. Almost all riders of @BMCProTeam going down in 1 crash. pic.twitter.com/T4qcQpqfyF It’s not entirely clear what caused the first BMC rider to come unstuck, but whatever it was, it started a chain reaction that ended with four abandons, including that of team leader Greg Van Avermaet. It was a cruel blow for the Belgian: he wasn’t just in terrific form and in with a shot at a great result, he’ll now miss Paris-Roubaix and the Amstel Gold Race as well; two other events he would have been among the favourites for.

Of course it wasn’t just Van Avermaet that had his chances derailed by a spill yesterday. Milan-San Remo winner Arnaud Demare (FDJ) and rising star Tiesj Benoot (Lotto Soudal) were also among those to abandon as a result of crashes. The Tour of Flanders continues to be a dangerous and unpredictable race.

It might seem harsh to keep singling out Etixx-QuickStep for criticism at this time of year, but such is the strength and depth of the team’s Classics squad that a best result of eighth (Zdenek Stybar) at Tour of Flanders is sub-par.

The team certainly had an impact on the race — Tony Martin was strong when the tempo increased a couple hours from the end, Stijn Vandenbergh was off the front at the business end of the race, and Stybar, Niki Terpstra and Matteo Trentin all looked threatening in the chase group in the closing stages. But once again, the team ultimately missed the winning move.

When Michal Kwiatkowski (Sky; formerly Etixx-QuickStep), Peter Sagan (Tinkoff) and Sep Vanmarcke (LottoNL-Jumbo) stole a march on the “peloton” with roughly 30km to go not one of the Etixx-QuickStep riders was able to bridge across.

Many other teams were in the same situation but few teams carry the same weight of expectation at the Classics as Etixx-QuickStep. We suspect it might have been another sombre affair in the team bus after the race.

Dimitri Claeys put in one of the rides of the day

The Pro Continental wildcard teams generally come to WorldTour races like De Ronde with a simple goal in mind: to get in the breakaway and fly the flag for their sponsors. But there was further motivation driving Wanty-Groupe Gobert at the Tour of Flanders yesterday.

You did Antoine & Daan proud all day out there Chapeau

A week after the tragic death of Antoine Demoitié, the riders of Wanty-Groupe Gobert were desperate to put in a performance that would honour their fallen teammate. After the day’s main breakaway had all but been accounted for, Dimitri Claeys got himself off the front in an escape group of seven riders, his unzipped jersey flapping in the breeze.

In his first Tour of Flanders Claeys was in the lead group when Sagan, Kwiatkowski and Vanmarcke surged across to join them. And when the race hit the Oude Kwaremont for the final time, only Claeys was able to follow Sagan and Vanmarcke on the ascent, getting dropped just before the top.

The 28-year-old ended up in the chase group for those final kilometres back to Oudenaarde and, in a spirited sprint, managed to cross the line in ninth place. He was the only non-WorldTour rider in the top 10 and one of only two in the top 20.

It was a gutsy performance from the Belgian and one that did his team proud after an incredibly difficult week.

Cancellara made a mistake in letting Kwiatkowski and Sagan go, but was impressive thereafter

Close but no cigar for Cancellara in Final Flanders

It’s easy to look back at a bike race and say, with the benefit of hindsight, that a rider missed a crucial move. But when Fabian Cancellara let Michal Kwiatkowski and Peter Sagan go with 30km to race, it seemed like a strange move even then. Here were two of the strongest riders in the race; two riders that, just over a week earlier, had broken away together in the closing stages of E3 Harelbeke and hadn’t been seen again. Cancellara himself admitted after the race that he probably made a mistake: “I missed this key moment when Sagan went with Kwiatkowski,” Cancellara said after the rce. “I did the maximum today, but I just missed this one second. Sep [Vanmarcke] was the last one to close that gap. [Why not bridge across?] Ask me tomorrow. I do not even know why right now.”

While the outcome of yesterday’s race might well have been different had Cancellara marked the Kwiatkowski/Sagan/Vanmarcke move, the way the three-time former Flanders winner responded was something to behold. He bided his time in the chase group until the Oude Kwaremont before blasting up the climb and making up ground on Sagan and Vanmarcke. And then he did the same on the Paterberg, catching a dropped Vanmarcke as Sagan rode solo over the top.

Given Cancellara’s time-trialling prowess it seemed as if the four-time world champion might be able to drag Sagan back before the line. But despite doing most of the work out of he and Vanmarcke, Cancellara wasn’t able to reel in Sagan who went on to win in style.

Ultimately, letting Sagan and Kwiatkowski go probably cost Cancellara a record-breaking fourth Tour of Flanders title. But finishing second and riding the way he did certainly still makes Cancellara worthy of praise. The Tour of Flanders will be all the poorer for his absence once he retires.

For fans of and those involved in women’s cycling, the Tour of Flanders broadcast has been a source of contention for many years. A lack of live coverage of the women’s race is seen as particularly galling, given the men’s and women’s races are held at the same time (i.e. the expensive infrastructure is already in place) and given the women’s race ends at a traditionally quiet time during the men’s race.

This year, for the first time, host broadcaster Sporza seemed to acknowledge calls for coverage of the women’s race and showed crucial moments live. It wasn’t a perfect start — perhaps less than 10 minutes of the women’s race was shown in total — but it was undeniably a step in the right direction. We got to see the elite lead group climb the decisive Oude Kwaremont, we saw Lizzie Armitstead (Boels-Dolmans) and Emma Johansson (Wiggle High5) ascend the Paterberg together, and we got to see a photo finish after a thrilling final sprint.

After years of reluctance from the host broadcaster to get behind live coverage of the women’s race, the fact we got to see any was a great sign. Fingers crossed we see even more in 2017 (and/or that the livestream is a little more reliable than it was yesterday).

With all the success he’s achieved in his career so far, it seems strange to think that Peter Sagan still had something to prove before yesterday’s race. But in a sense he did.

For all his 75+ professional victories – including stages at the Tour de France and the Vuelta a España, not to mention his world championship victory last year – the Slovakian showman was still without a Monument victory beside his name. Placing that level of expectation on most riders would be unfair, but Sagan’s ability and promise were such that, until he won a Monument, it could have been argued he hadn’t yet reached his potential. Sagan was the strongest rider in yesterday’s race. He worked hard to ensure his move with Kwiatkowski and Vanmarcke got clear, he was brutally powerful on the Oude Kwaremont and Paterberg when he needed to be, and then he had enough in the tank to time-trial away to a famous victory. Perhaps just as importantly, Sagan was arguably the smartest in the race.

Once criticised for being impetuous and lacking race intelligence, Sagan followed the dangerous move by Michal Kwiatkowski, attacked on the last two climbs (to force Cancellara to ride full-gas just to stop the deficit from growing) and then, once he was solo and heading for the line, barely looked back at all, instead focusing on getting low and riding to the finish.

With his Tour of Flanders victory, Sagan becomes the first world champion to win a Monument since Paolo Bettini took out Il Lombardia (then known as the Giro di Lombardia) back in 2006. And he’s the first to win the men’s Tour of Flanders in a rainbow jersey since Tom Boonen, also in 2006.

The victory confirms that Peter Sagan is one of the very best riders of his generation. Best of all he’s just 26 and has many more years to add future Monument titles to his palmares.

Could it be that we only have to wait a week for the next one?

This article originally appeared on our sister site CyclingTips.com