Close but no cigar for Cancellara in final flanders 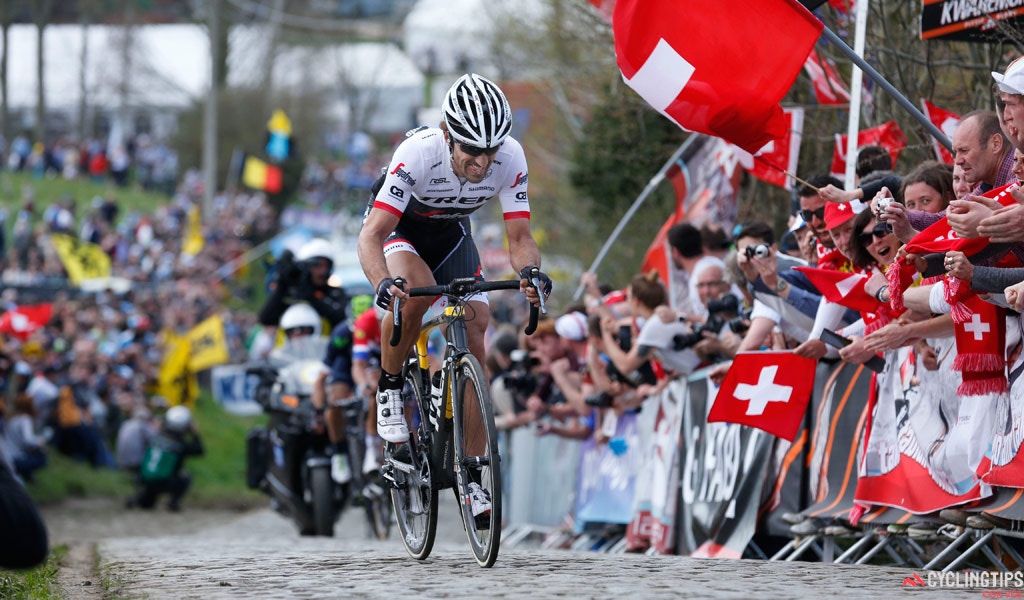 “I missed this one second, this one certain moment”

He was undoubtedly one of the strongest riders in the race but, missing out on the key move by Peter Sagan (Tinkoff) and Sep Vanmarcke (LottoNL-Jumbo), Fabian Cancellara left himself with too much to do.

Chasing furiously, he managed to catch Vanmarcke after Sagan pushed ahead on the final climb of the Paterberg. The two joined forces but were unable to come back to the world champion, who soloed in for his first Monument win.

“I’m not happy,” said a disgruntled Cancellara afterwards to Sporza. “I raced to win. When we look how it went, I have to be happy in the end. I did everything I could.

“It’s always hard to analyse everything right after. It wasn’t the best day: I missed this one second, this one certain moment.”

The one second he mentioned was a hesitation when Sagan made his move with approximately 20 Miles to go. Cancellara remained in the main bunch, while the Tinkoff rider pushed on with former world champion Michal Kwiatkowski. Vanmarcke was the only one who managed to get across.

Had Cancellara gone with it, it is conceivable that he might have won. His later pursuits showed he was in fine form. However he didn’t, and his chances essentially evaporated at that point.

“It was just a one-second decision,” the Trek-Segafredo rider explained. “Maybe it was not the right decision. I knew there were others in the bunch, Astana, Katusha, who also wanted to win. I’m not saying it was too early, clearly it was the deciding moment for Peter, he could bring it home.”

He tried to recover from that, attacking in pursuit, but he’d left it too late.

“I tried to manage on the Kwaremont and the Paterberg, but instead of being ahead, I was behind, which isn’t so nice. I had to chase. I could manage to come to Sep.”

Having done so, he had a sliver of hope at that point. “Peter has shown in the past that in the last few miles he’s not at the capacity he can manage to the finish,” he explained. “I knew if Sep would not pull, I would also give up. I said ‘listen, let’s work together, or we will lose the podium.’ We did the maximum. However Peter was very strong.”

In Friday’s press conference Cancellara didn’t want to dwell on the fact that he was riding the race for the last time. He will retire this year and so the chance to take a fourth title will not come to pass. He admitted to being emotional afterwards, and perhaps felt more nerves beforehand than he displayed on Friday.

“I felt super fantastic,” he said. “[But] last night I fell asleep at 1:30, I woke up at six, got on the on bus, told the guys it was not the best sleep, pressure, a lot of things, final race.

“Today I didn’t have the same feeling as at the start as other races. I was devil in Harelbeke, I was an amateur in Gent-Weveglem, today I managed everything I could, but now it’s done.”