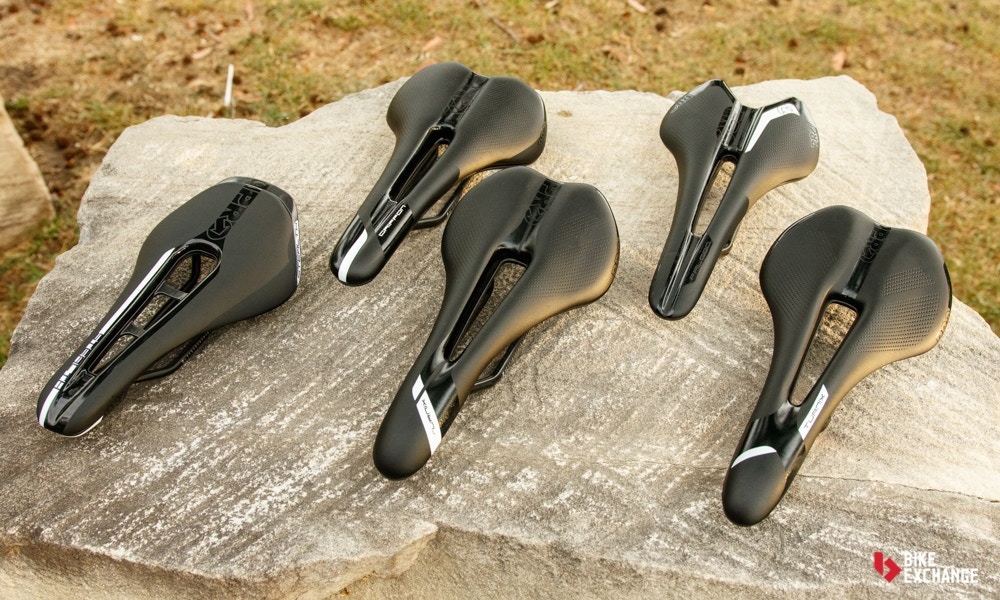 It’s not too often that a company will completely overhaul its entire range of product, but for 2017, that’s exactly what Shimano’s component company, PRO, has done with its saddles.

The PRO saddle range is one that has recently built itself a strong reputation, with designs conceived through Shimano’s own BikeFitting.com company, a business that Shimano acquired a number of years ago.

Here we take a look at the new performance range of saddles from PRO, including updated versions of the Falcon, Turnix and Griffon. These saddles are joined by a wholly new model, which follows the most recent trends in anatomic saddle design, the Stealth.

You can have it any color as long as it’s black. The saying certainly applies to PRO’s updated saddle range, but a limit in color is by no means a limit in options, with over 22 new options across the four model names. All the new saddles feature carbon reinforced bases for additional support and durability (no more sagging of the shell from wear). This shell suspends the attaching rails for a small amount of shock absorption.

Superlight EVA foam padding is found within all models, covered by a low-friction polysynthetic leather (PU). This leather is in-molded into the saddle base, a very similar technique to how the plastic of premium cycling helmets is integrated with the foam. It’s something that’s both lighter and more durable than traditional stapling of the cover to the base.

All new saddles are available in either 142 or 152mm widths (and 132mm outside of Australia), most dealers are equipped with a gel measuring device to point you toward the right width to match your sit bones.

All saddles have increased the distance from the rails to the saddle shell by 7mm. PRO claim this is done to ease tool clearance with trickier seatpost designs, but it also helps to ensure flex in the shell isn’t limited by protruding seatpost bolts or clamps. Most models are available in a choice of either carbon (lighter by approx 30grams, but more expensive) or stainless steel rails. Note that the carbon railed versions, like most other saddle brands, feature 7x9mm oval rails and so may not fit all seatposts. All new saddle models offer two inconspicuous bolts at the back of the shell. These are designed to work with a small range of attachable accessories from PRO (sold separately). These include a tube and Co2 holder, a race number holder, an action camera mount and even a rear fender (not pictured).

And lastly, PRO offers a 30-day money back guarantee on any saddle bought through a local dealer. It’s a feature we’re fond of given just how personal saddle choice is. The Stealth is an all-new race model from PRO and is proving to be the brand’s most popular yet. The short stub-nose saddle shares a similar shape to the hugely popular Specialized Power, a unique shape that was arguably inspired by ISM.

With a flat top and a substantial middle cut-out, this saddle is designed to support the rider through the sit bones and not soft tissue. Featuring a uni-sex design, the Stealth is just 255mm in length. Like most PRO saddle models, the Falcon is available in either an anatomic version with center cut-out (pictured) or as standard without. The Falcon is flat along its 275mm length, and flat across its width too. This creates a performance saddle that is designed for riders with a stable riding position.

This model is easy to pick from the other PRO seats by its wing-like rear tail, a feature that helps reduce weight where material is typically not needed. The padding is quite generous for a performance saddle, but the foam is quite thick in its density for a supportive ride.

We weighed a 142mm width version of the anatomic carbon-railed Falcon at 179grams.

The Turnix features an intermediate curve across its width, with a subtle rounding at the edge. Along its length, the saddle drops in the center with the nose and tail sitting at a raised height. PRO claim that this curvature is designed for riders with some movement in their riding position. Looking to what other brands with a similar shape claim, it could be argued that the Turnix may be best suited to riders with less flexibility.

In Australia, a women's specific version of the Turnix is also available (pictured left). This offers more substantial padding across the entire saddle and sees a more subtle curvature in the middle of the saddle and is a touch wider at the nose. This women’s model adds 10 grams over the men’s. More women's specific versions exist for additional PRO saddle models in other markets. The Griffon is a generously padded model that’s flat along its length but rounded across its width. PRO claim this saddle is designed for riders with more movement in their riding positions.

Looking to the anatomic version with a center cut-out, there’s a subtle channel that runs either end of the hole. This is designed to relieve soft tissue pressure. Of all the models discussed here, the Griffon features the softest padding and therefore best suited to more casual riders that are less performance-focused.

An anatomic 142mm stainless-railed version is claimed to weight 225grams.