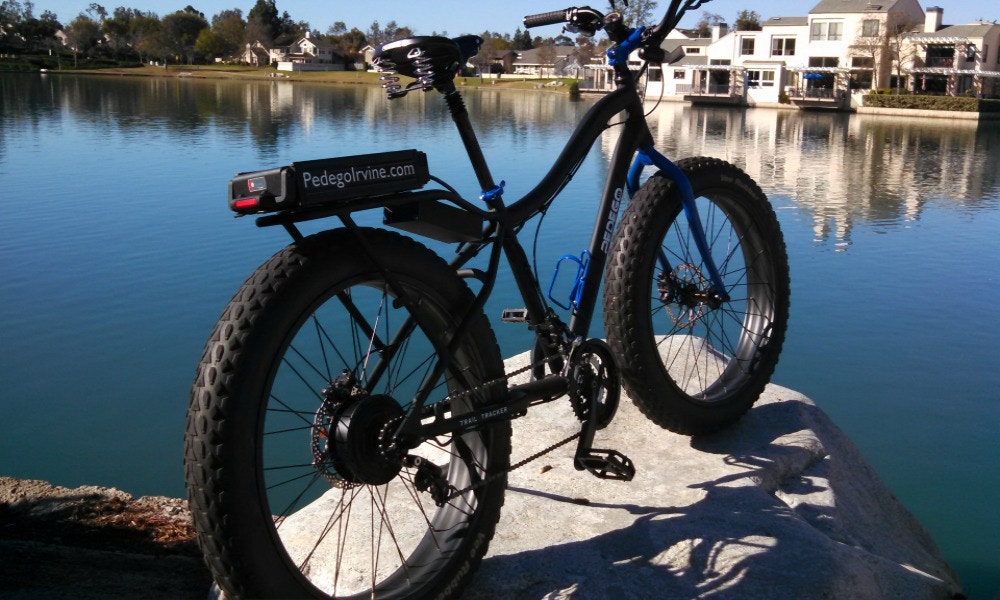 What makes someone working in aerospace turn their career from satellites to bikes? If you ask Bob Bibee, it has a lot to do with the Pedego Smile. “You know – that massive grin you get on your face as soon as you jump on one of these bikes. There’s also the Pedego Squeal,” explains Bob. The bikes he’s talking about are e-bikes, and they’re the Next Big Thing in the US. Having taken Europe by storm, Americans are realising just what a sensation electric bikes are. “Pedego began back in 2007 and by 2009 the business was in full production. From then, orders pretty much doubled every year until 2013, when demand just went to a whole new level. Wow – it blew out the seams that year! 2014 didn’t slow down and we’re already two months into 2015 and everyone’s run off their feet. In a good way!” said Bob.

So what are e-bikes?

They look like a bike, they feel like a bike, but they’re electric motor assisted. So you have a choice of riding them as you would a normal bike, or you can kick in some juice and get a bit of power to assist. Low-speed e-bikes (which can therefore be deemed as ‘normal’ bikes and used on the same tracks as any other rider) provide pedalling assistance up to 20-miles an hour.

Pedego Electric Bikes founder Don DiConstanzo used to love going to his local beach. He’d take his bike there, but the problem was every time he then headed home he was faced with a nasty hill climb. It turned him off wanting to take the bike in the first place. He heard about e-bikes and decided to buy one and give it a go. It was pretty clunky, cumbersome and not all that enjoyable, but it did get him up the hill. And that got him thinking – maybe he could improve this experience? Maybe he could make his own e-bike? That’s not only where the Pedego story starts, it also explains a large portion of Americans who are now flocking to buy their own e-bike. Baby boomers who want to be outdoors and want to be active, but don’t want to have to put their bodies through gruelling physical effort; just pure enjoyment. They’re also great for people with health problems – an e-bike allows them a form of exercise and a chance to be active in fresh air.
But the people who have Bob especially excited are the young ones – commuters who are cottoning onto this ticket to ride. It’s no longer a novelty for someone in their early 20s to walk into Bob’s store and declare they’re not buying a car; they’re not wasting their money on the gas or their time sitting in traffic jams. Instead, they’re going to get an e-bike so they can commute freely and easily, turn up to work without smelling like they’ve had a work-out, and save cash while they’re at it. The beauty of an e-bike is that it gives the rider options. Sure you can kick in some juice to make your journey faster and easier, but you don’t have to. Instead, you can rely on the 6 or 7-gear bike to give you your daily dose of exercise. Some of us start work with the best intentions of going to the gym before heading home. Reality rarely pans out that way…! But what if you ride your e-bike to work and get the exercise at the start of the day, then just kick in some juice and zoom home quick as a flash once you’ve knocked off? It’s the bike-world version of having your cake and eating it, too! But back to Bob, and the awesome things happening in Irvine Did you know that Irvine CA is home to a rabbit warren of some of the most incredible bike trails in the country? No? Well – you’re not the only one. Just last week Bob took some friends out riding who’d been living in the area for 14 years. They hadn’t a clue these trails were almost on their doorstep, and had been all along. They were astounded. It’s a surprisingly common story, but Bob’s about to change all that. If you ask Bob, his Pedego Bike Store is located in the best place in the world for this business, and he’s come up with some pretty awesome ways on how to make the most of it. What does an e-bike have to do with making your work more fun and productive? Sure you can go visit Bob and his team if you’re in the market for a Pedego e-bike (as well as a smaller number of KHS bikes), but you can do a lot more than that…. The store has recently converted its upstairs space into a small pub and wine bar on one side, and a cool conference centre on the other. In doing so, Bob’s created the kind of off-site corporate experience that takes the boredom out of boardroom.

It goes something like this: - Your work team (up to 10 people) arrives at Pedego Irvine and heads to the conference room (complete with full audio visual) to kick off the day - Two stores down from Pedego is the most delicious French bakery, and so Bob’s got you covered with très bon breakfast catering delivered to the conference room. Café au chocolat, anyone? - Nearing lunch time it’s time to break, so you all head downstairs where you’re each introduced to your rental e-bike and given an easy run-down of how things work - On you all jump and off you all head into the trails for some exhilarating riding - With tummies starting to rumble you head to Strawberry Farms, the most wonderful restaurant snuggled on a nearby golf course - You indulge in a sensational lunch (at 20% off for Pedego friends) before jumping on your trusty steeds and heading back to ‘work’ for an afternoon session - You finish the day by closing the books and taking a few steps over to the pub/wine bar for a cheeky refreshment Now that’s a productive day in the office! How can a team not be inspired after a session like that? It’s just one of the many ideas Bob is rolling out at his store, which has the added bonus of being located just four miles from Pedego’s international head office and factory. Check out the great range of Pedego bikes available now on BikeExchange!

Being so close to the heart and soul of Pedego means Bob’s Irvine store is pretty much the brand’s showcase. Although Irvine was the 30th Pedego store when it opened, there’s now something like 70 worldwide, making it a sensational home-grown success story. “I know these bikes back to front. I could pull one apart entirely and build it back up from scratch. I could answer any question you could possibly think of about e-bikes. But nothing, absolutely nothing, compares to just jumping on and having a ride. The moment you do that, you just get it,” said Bob. And having a ride is no trouble at all in the Irvine store. Their floor stock is always complete and if for any reason Bob needs a bike at short notice, he just jumps on his own and rides over to head office, picks it up on his bike trailer and takes it back. It’s how he often makes local bike deliveries to his customers, as well. “I call it PedEx delivery,” he smiles. Bob does in fact do a lot of grinning, as do his customers. Maybe that remark about the Pedego Smile isn’t too far off the mark at all…..