ORICA-BikeExchange at the Tour de France: Highs and lows 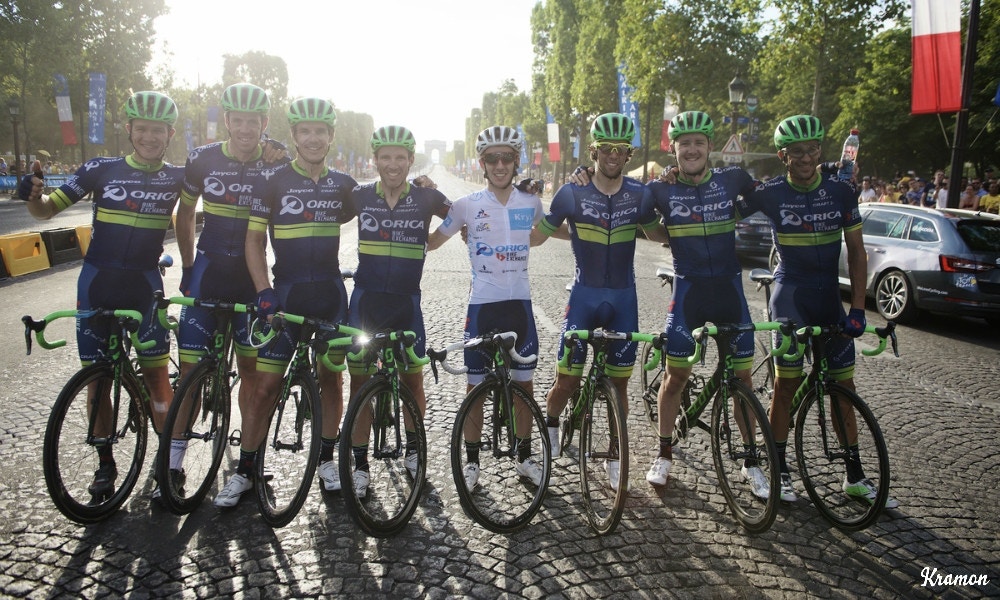 ORICA-BikeExchange went into the 2016 Tour de France full of hope after what can only be described as the best start to the season ever for the Australian team.

Simon Gerrans kicked things off in January winning the Tour Down Under for a fourth time, Mathew Hayman fulfilled a lifelong dream by winning Paris-Roubaix, and the team had their first ever Grand Tour podium finisher in the form of Esteban Chaves who rode the race of his life at the Giro d'Italia.

Entering the biggest Grand Tour of the season, the pressure was on to perform and continue the early season success, and the team delivered in spades. Sport director Matt White praised the effort and performance of the whole team over the course of the race. “This has been a very gratifying Tour de France for us,” said White. "It really is sensational we have ticked every box: stage win, white jersey and fourth overall.”

We take a quick look back at some of the highs and lows for the ORICA-BikeExchange team at the 2016 Tour de France.

The team entered the Tour wanting to collect a stage win and on Stage 10 they ticked that box in emphatic style. Michael Matthews, Luke 'Durbo' Durbridge and Daryl Impey all made the days breakaway, riding their parts to perfection to set Matthews up for his maiden Tour stage win.

Sagan forced a split with 20km to go, cutting the group in half. All three ORICA-BikeExchange riders made the split and all eyes were now on them to secure a result. Durbo kept the tempo high enough to prevent any attacks until the final steep climb, where Impey then took over the reins and covered anything that moved.

With the finish line in sight, Impey went to the front to lead out Matthews despite not having much left in the legs after his tireless work in the final few kilometres. Van Avermaet initiated the sprint as Sagan quickly began to wind up too. Matthews showed maturity and patience to 'step out' at the perfect moment and power to the line. Stage win to ORICA-BikeExchange and the first box ticked.

“It’s unbelievable,” said Matthews. “The emotion at the moment is just sinking in. I’ve just won a stage of the Tour de France after two really bad years in this race.”

“I was really close to giving up on this race, I just thought this race is not for me and I’d focus on other races, but today my dreams came true. It was never the plan to get into the breakaway, we thought it was going to come down to a bunch sprint. We have such a strong group of guys here and the way we work as a team is that everyone gives everything for their teammates.

“As you could see Daryl (Impey) and Luke (Durbridge) gave their all for me today and were both amazing all the way to the end."

Durbridge himself proudly added, “When you close out like that you could call it a technical masterpiece. We are pretty happy with that. It took full commitment from everyone from kilometre zero to the finish. It doesn’t always come together like that but when it does it's pretty special.”

Few could argue that Simon Gerrans has had more than his fair share of bad luck at the Tour de France. For the third time in as many years, Gerrans was forced to abandon the race due to a crash.

On Stage 12 of this years tour, Gerrans was leading the peloton on a high speed descent when a strong breeze washed out his front wheel and he came down hard. Somehow he managed to get back on his bike and ride the remaining 35km including the Mont Ventoux climb.

X-rays would later reveal a fractured collarbone, ending not only Gerrans' Tour de France, but his Olympic dreams as well. In addition to being forced to abandon the race for the past three years, Gerrans was also forced to abandon in 2010 with a broken arm. Surely it's about time for his luck to turn.

We wish the 36-year-old Aussie legend a speedy recovery and hope to see him at next years Tour de France, this time with luck on his side.

High: Yates You Can Adam Yates has hinted at his potential as a Grand Tour contender with some significant results in the past, but his breakout performance at the 2016 Tour de France was one out of the box. The 23-year old rode an impressive race to become the first British rider to win the best young rider award at the Tour de France in addition to finishing in fourth place overall, the best ever overall result for the team at the Tour.

“We came here not really riding for the overall,” said Yates in Paris. “It just kind of happened and the whole team have been incredible in their support, all the riders and the staff who have worked so hard everyday.”

Yates first captured the white jersey on stage 7 following a late attack that also placed him second overall on the classification.

Had it not been for a 'bad day' on Stage 19, he could have been the first OBE rider to stand on the podium in Paris.

“There has been no pressure, other than I what I put on myself, we approached the race day by day and I’m very happy with how its turned out this is a fantastic honour. I had a bad day on stage 19 and I wasn’t sure how my legs would respond but I recovered well and here we are. I’ve won the white jersey and fourth overall and that’s very satisfying."

Yates' performance was so outstanding it spawned its own hashtag. #YATESyoucan began trending as the Tour de France was coming to a close and the young Briton was almost certain to win the young rider classification as well as eyeing off a podium spot.

“The future is ahead of me and I’m sure I will be back fighting for a podium place or even challenging for the Yellow Jersey. I will try my best, you never know what will happen but I’m going to continue working hard and do everything possible to improve.”

Sport director Matt White was full of praise for Yates. “Of course we knew that Adam is an incredible talent and full of potential and now I suppose the whole world also knows that." Low: Yates run in with the flamme rouge

In what has to be a podium contender for the most bizarre incident at a Tour de France, on Stage 7 this year the 1km to go banner fell on Adam Yates.

Yates had just attacked the group of GC contenders on the final technical descent, opening up a small gap as he entered the final 1km. The young Briton was pushing as hard as he could out of the saddle to maintain the gap when unbelievably, the inflatable flamme rouge banner indicating 1km to go fell right on top of him. Yates had no where to go, and no time to react, crashing hard into the banner, and landing face first onto the road.

Yates got back up and completed the stage but would end up with four stiches in his chin and some heavy bruising on his face.

“I attacked on the descent of the Col d’Aspin and started to take some risks to try and gain some time,” said Yates after the stage. “I didn’t see what actually happened, but clearly the banner fell into me as I was approaching the finish.”

“Obviously I’m disappointed because I was feeling good and things like that are not really supposed to happen. I have a few new cuts on my chin for the collection but otherwise I’m ok."

For those wondering about some of the other podium contenders for the most bizarre incident at a Tour de France, Chris Froome running up Mont Ventoux on Stage 12 this year is worthy of a mention, as is the now infamous Orica team bus that collided with the finish line banner on Stage 1 of the 2013 Tour.

With the team's hugely popular Backstage Pass series, it's a common sight to see the jovial team antics that go on behind the scenes. The daily coverage from this year's race did not disappoint, and the loyal fans were clearly in full force too. Fans continued the tradition of making treats, from lamingtons to sausage rolls and to a OBE replica jersey cake, the staff were clearly all well fed.