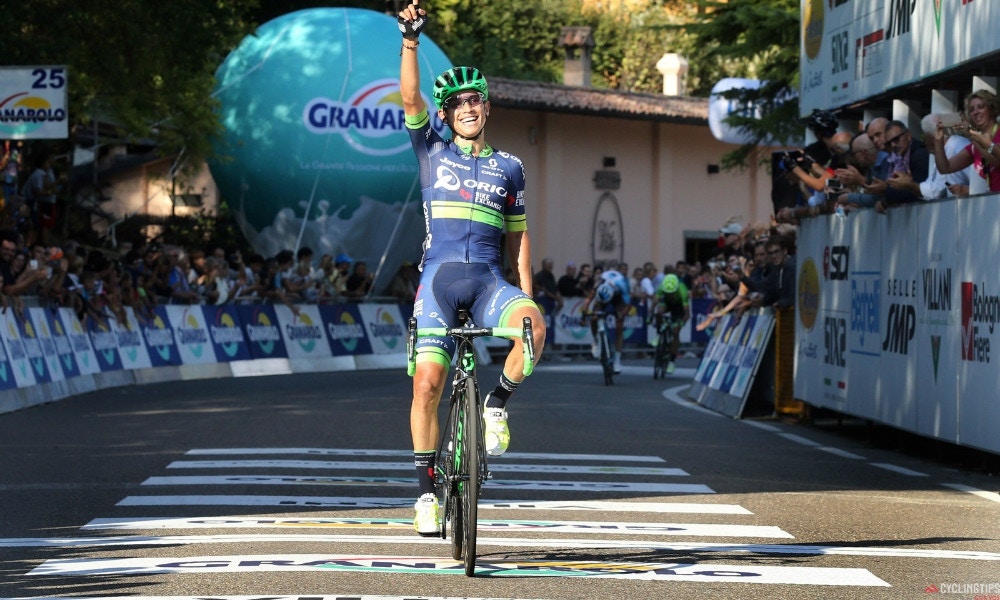 2016 was officially the best season ever for ORICA-BikeExchange winning at least one stage in each of the Grand Tours and two Monument victories, finishing the season with 17 WorldTour wins. Add to that two Grand Tour general classification podiums and the best young rider jersey at the Tour de France, the Aussie team continued to push their case as a powerhouse on the WorldTour stage.

“If you had presented us with these results at the start of the season, we would have asked where to sign,” Bannan said. “Every year our group continue to push the limits and we can absolutely claim this season as our best to date.”

“Our victories come from 11 different riders, another pleasing fact, and each of them with an individual story that goes well beyond standing on the top step of a podium."

We've taken a quick trip down memory lane, highlighting the standout achievements of the team in 2016 with the best behind-the-scenes cycling videos in the WorldTour to re-live the magic.

The team kicked things off with a bang at the Santos Tour Down Under winning virtually everything up for grabs; the People’s Choice Classic, four out of six stages, the points classification and the overall title thanks to Simon Gerrans and Caleb Ewan. It could have even been five from six had Simon Gerrans not suffered a crash in the final 500m of stage 2.

Bannan: “We started the year as always with a lot of pressure at the Tour Down Under and yet again the boys faced it with determination, winning four of the six stages and taking out the overall. To leave Australia with five WorldTour victories before you even hit Europe is about as good as it gets.”

If there was ever a victory that typified a man and a team, Mathew Hayman's victory at Paris-Roubaix was it. Five weeks earlier Hayman had fractured his right radius and looked in doubt to line up for his 15th attempt at the famous race, but ten days short of his 38th birthday, the team captain would go on to claim one of the most inspiring and deserving victories of all time.

Hayman was in the day's earlier breakaway and had to legs to follow Classic specialists Tom Boonen, Ian Stannard, Sep Vanmarcke and Edvald Boasson Hagen when the pace was forced, and the cut was made. Towards the end of the race he was bumped from his line and lost positioning thanks to a Stannard shunt that looked on TV to be the end of his race, but as Hayman said before the race, "just keep riding." He did exactly that, rejoining the group, making the decisive attack approaching the velodrome, and timing his sprint to perfection for the biggest win of his life.

Bannan: “You have to highlight Mat Hayman’s victory at Paris-Roubaix as one of the stand out moments of the season. To come back from that wrist injury to win in his 15th attempt is something that will motivate and inspire our riders to keep fighting for many years to come.”

Esteban Chaves announced himself as a legitimate GC contender at the 2015 Vuelta a Espana, and the 2016 Giro d'Italia reaffirmed his Grand Tour winning potential. Chaves took victory on the queen stage and held the leaders pink jersey going into the final day in the mountains on stage 20. Had it not been for a remarkable revival from Vincenzo Nibali on stage 19 and 20, the Colombian would have won his first ever Grand Tour. As it was, Chaves claimed second overall and ORICA-BikeExchange’s best result and first ever Grand Tour podium.

Bannan: “We may have lost the pink jersey on the penultimate day, but our disappointment was quickly replaced with content, pride and excitement. We knew immediately that the 2016 Giro d’Italia was just the start of our Grand Tour journey.”

The momentum from the Giro and Paris-Roubaix rolled into the Tour de France as Adam Yates became the first British rider to win the best young rider award in just his second attempt at the world's biggest race. Not only that, the Brit finished in fourth overall, only 21 seconds off the podium in Paris.

Bannan: “We knew that Adam is an incredible talent and full of potential and his performance at the Tour de France this year showed that to the world. One of the most pleasing elements of his performance was his poise and control in what is a frantic and stressful race. As a young rider, he showed wisdom well above his years.”

The team also won a stage in emphatic style after Michael 'Bling' Matthews finished off good work from Luke 'Durbo' Durbridge and Daryl Impey who played their supporting roles to perfection. The win was enough to bring Matt 'Whitey' White (Sports Director) to tears as emotions spilled over at the finish.

Experience the perfect team ride as Durbo and Impey set up Bling for the win on stage 10.

The Vuelta has been a happy hunting ground for the team over the last two years chalking up three stage wins and fifth overall in 2015 which incredibly was exceeded by four stage wins and a podium finish in 2016. A Grand Tour double to Magnus Cort on stage 18 and 21, along with stage victories to Simon Yates on stage 6 and Jens Keukeleire on stage 12 made the Vuelta the most successful Grand Tour in ORICA-BikeExchange history.

Chaves made it two podium finishes for the year following an 'all or nothing' attack on the penultimate stage that typified his never-say-die attitude and the teams willingness to lay it on the line. Yates added a top ten finish to his stage victory, finishing sixth overall and further strengthening the teams future GC ambitions.

Bannan: “To finish the final Grand Tour off like the previous two, well above our expectations, was another gratifying moment for the team this year. The results are a sign of talent, but they are just as much about the belief our riders and staff have for this team.”

“Last year we started to introduce ourselves into the general classification game, but this year with have taken a big leap in this regard.”

“We now start week-long races and Grand Tours with genuine winning options, whether that be with Esteban Chaves, Simon or Adam Yates."

In what had already been a history making year for the team, Chaves continued to break records becoming the first non-European to win the season’s final Monument, Il Lombardia. He also became the first Colombian to win any of the sport’s five Monuments.

Chaves made his move on the penultimate climb of the day, culling the peloton to a select group of riders before showing he has all the tricks by winning a three-up sprint.

Bannan: "Our second monument victory of the season was another emotional win for the team. Esteban went in as a favourite and rode as such, but also, particularly for him, it was a signal of where he has come from after his crash to now. No one can ever take ‘the first Colombian to win a monument’ away from you."

Following Hayman's victory at Paris-Roubaix and previous victories at Milan-San Remo and Liège-Bastogne-Liège, it means the Tour of Flanders is the only Monument left for the team to tick off.

To add to the joy of the Il Lombardia victory, days later Chaves announced that he had resigned with the team until at least the end of 2019. Along with the contract extension of Adam and Simon Yates, the future GC ambitions of the team appear to be in good hands.

The team now enjoys a well deserved rest before the 2017 kicks off with the Mitchelton Bay Cycling Classic, Mars Cycling Australia Road National Cycling Championships, the Santos Tour Down Under and the Cadel Evans Great Ocean Road Race.

From all at BikeExchange, it's been an honor being along for the ride and seeing dreams comes true this season. Orica-BikeExchange, you rock!