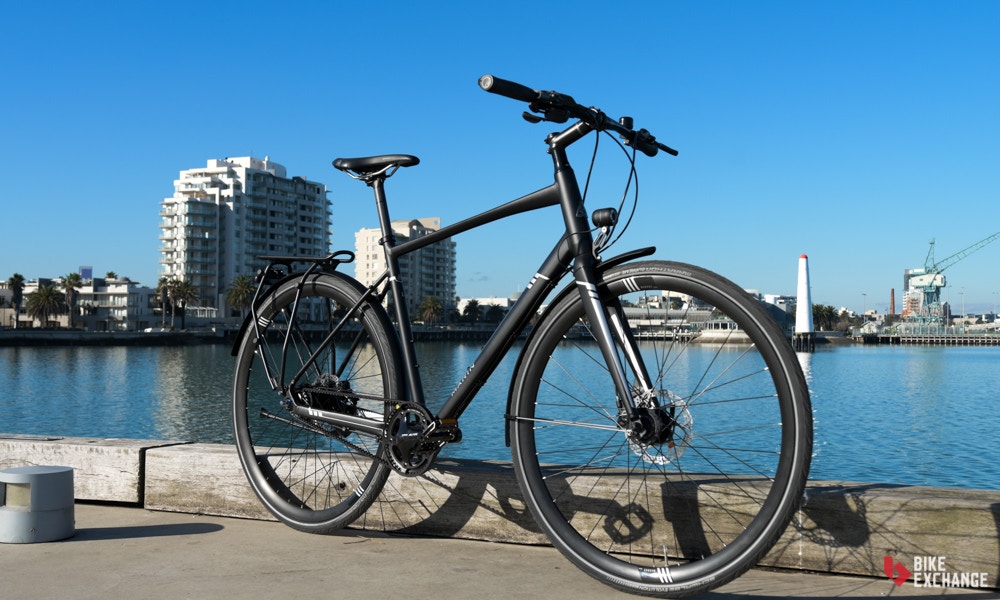 Across the Golden Gate Bridge from San Francisco lies Marin County, a place widely regarded as the birth place of mountain biking and home to a bicycle company that bares the same name. Established during the mountain bike boom of the late 80’s, Marin have a simple company ethos “Life is better with bikes”, a simple message that any pedal pusher can relate to.

Whilst the brand is best known for its mountain bikes, Marin is equally committed to building a range of bikes suited to cycling’s multiple disciplines and the Fairfax range of bikes is a testament to that. The SC6 DLX sits atop of the Fairfax family of bikes as the brand's premier “sports commuter” bike. We spent a number of weeks riding around Melbourne on the SC6 to get a sense of what it’s like to live with on a daily basis, and if there’s merit to spending e-bike money on a non-assisted bike. 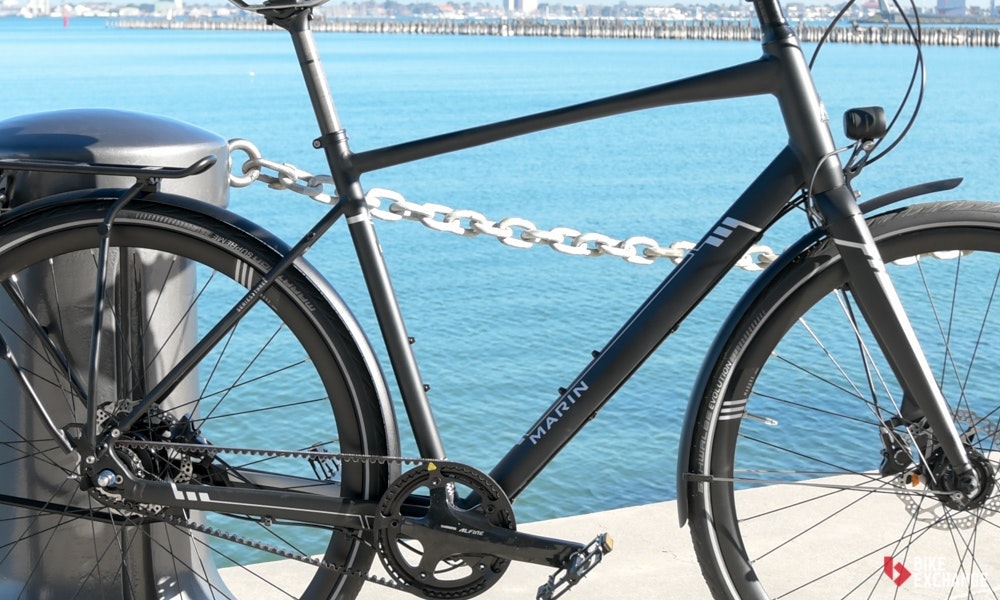 The “Series 3” frame, as found on our test bike, is manufactured from 6061 aluminium. It's a material favored in the bicycle industry for its heat tolerance and strength, impressive corrosion resistance and relative lightweight. The frame is well crafted, as expected on a top-tier offering, with smoothed over welds evident at key junctions. The SC6's frame is mated to a lightweight and vibration-absorbing carbon fiber fork, a premium touch not typically found on utilitarian bikes.

The frame features a mix of internal and external cable routing. The gear and brake cables run externally on the bottom side of the downtube via a series of bolt-on cable clips. Wiring for the included dynamo hub and compatible lights are all internal for a clean, integrated look. Fender, rack and kickstand mounts are present (and in use) and sit near to the disc-specific forged drop-outs.

The geometry of the Fairfax is more similar to that of a flat bar road bike, focusing primarily on stability and comfort. On the large sized bike offered for this review, the confidence inspiring stability is evident. Featuring a wheelbase over a meter in length (1062.7mm), 435mm chainstays and a 195mm tall headtube, the SC6 puts the rider in an upright, yet efficient position sure to please riders wanting a sporty yet stable feel to the bike. 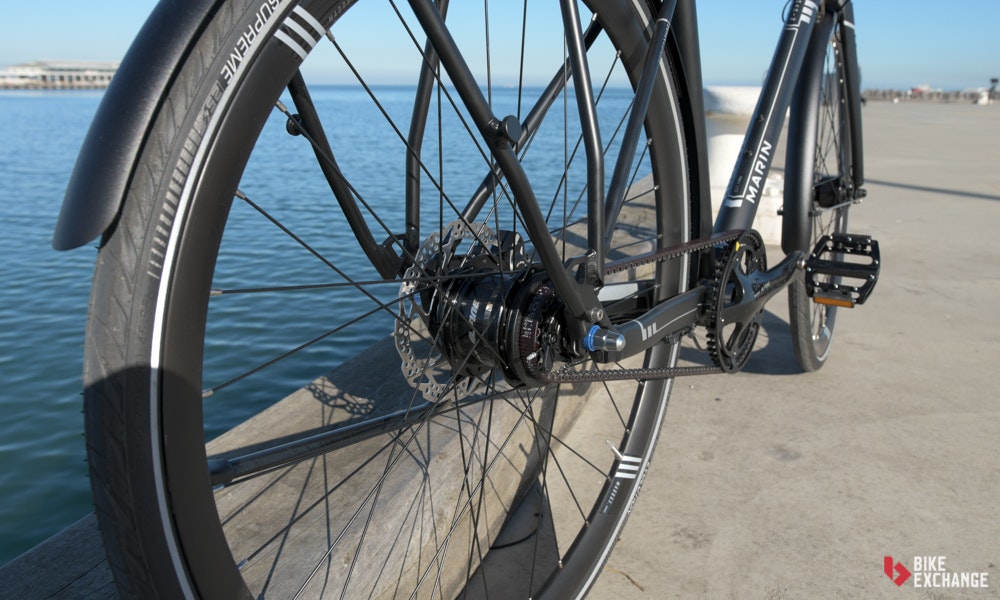 The SC6 DLX's belt-drive and internally geared drivetrain is where a large portion of the cost is justified. The groupset is courtesy of Shimano in the form of its stellar Alfine 11sp internal geared hub. Being belt driven, market-leader Gates supply the CDX centertrack 115t belt which is accompanied by a Gates carbon drive 50t chain ring attached to Shimano Alfine Hollowtech cranks. The rear cog also comes courtesy of Gates with a CDXC 22T cog fitted to our test bike. This combination leaves you with a bike that requires extremely little maintenance, rides silently and won't ever leave a grease mark on your favorite chinos.

The gear range on offer from the Alfine 11 speed hub is similar to what you’d find with a 2x9 (18 speed) derailleur gear system which suited the flat roads of Melbourne of where the bike was tested. The gearing was well suited to faster-paced fitness riding or a speedy commute, However, those seeking an easier pedaling ratio for use in rolling or mountainous terrain may find the gearing a little tall. 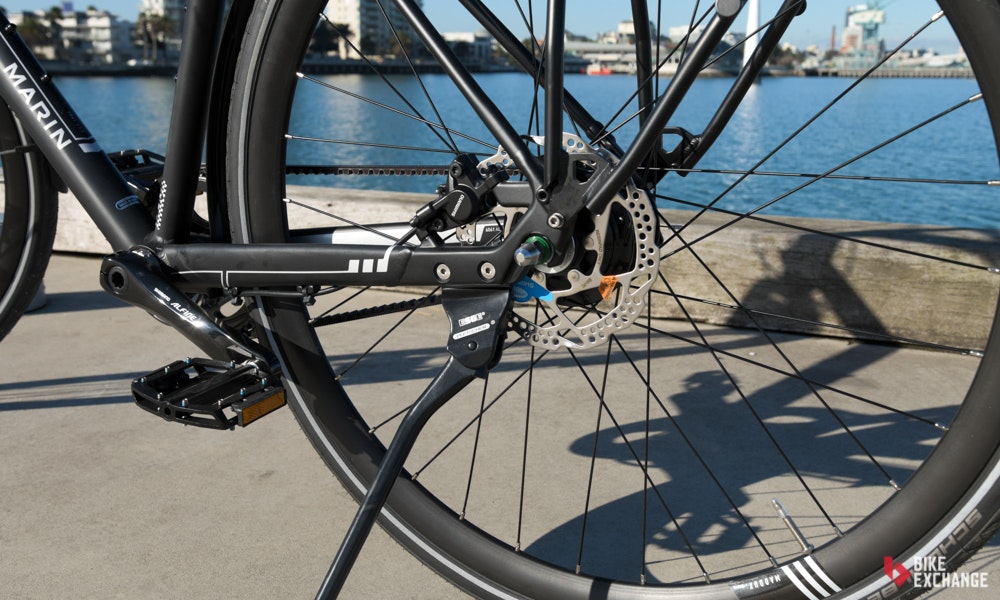 The specification and fit-out of the SC6 DLX certainly live up to the bike's Deluxe moniker. German outfit Ergon provide the grips and supremely comfortable saddle. Pletscher supply the integrated kickstand, bespoke aluminium fenders are fitted as standard as is a Rack-time Match-it QL3 rear rack, which is a big help for riders carrying groceries or extra goods to work. 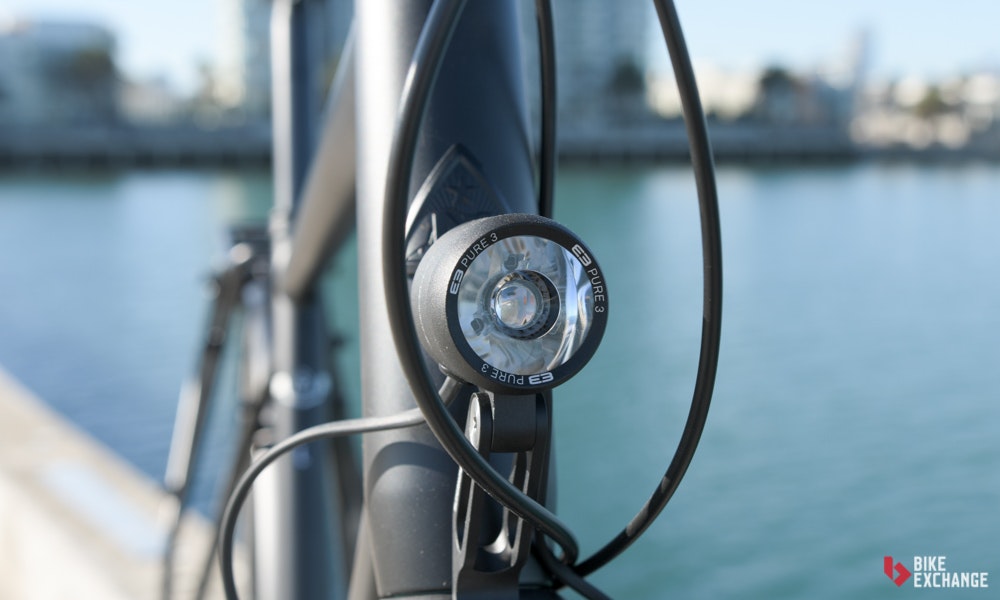 Working in conjunction with the Shimano Alfine dynamo front hub is a Supernova E3 Pure 3 head light with an E3 tail light fitted out back. This lighting solution is a great addition to the bike, proving riders with battery free illumination that was more than capable of lighting up the road in low light conditions.

The wheelset, with the Alfine hubs at the center, features Maddux SR500 30mm deep aluminium rims laced with steel spokes. Finishing off the bike is a set of puncture resistance, near-on bomb proof Schwalbe Marathon Supreme tires. These tires tick nearly every box when looking at what makes a great commuter tire.

Marin provides the finishing touches to the bike, fitting their own seatpost, stem and handlebar combination. The weight for the bike sent for review was 13.18kg including flat pedals but no bottle cages – not a bad number when you consider just how laden it is with accessories. 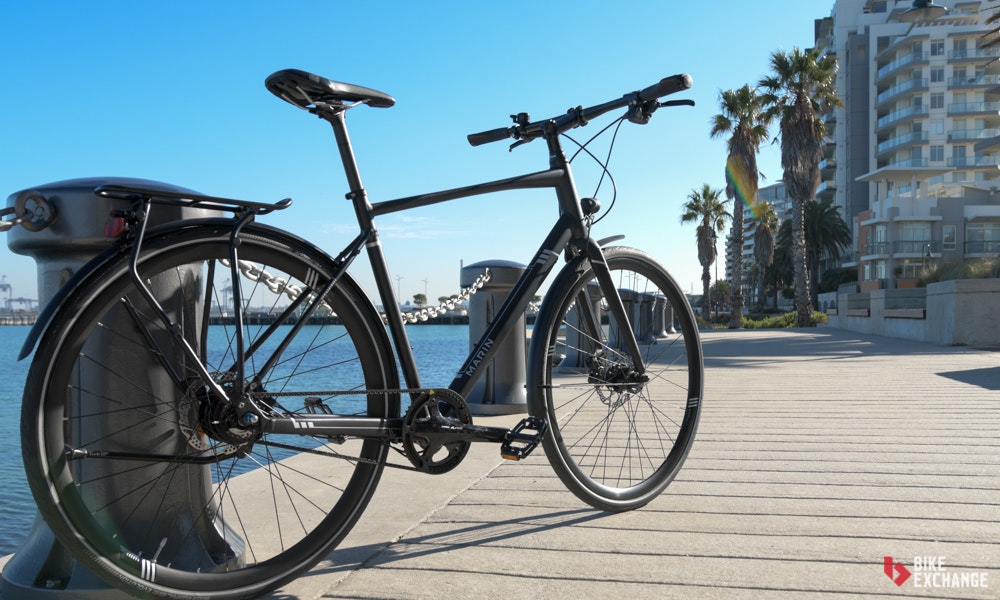 Almost silent in operation thanks to the superb Gates belt drive system, the bike carried speed effortlessly and quite simply, it was a joy to ride. Handling was surprisingly sharp if a little twitchy when riding out of the saddle. That said, navigating through traffic rarely felt like a hard task. The handling is courtesy of the 720mm wide flat bars combined with the taller headtube and relatively steep 72.5-degree headtube angle. Those bars offered plenty of control and leverage, but just felt too wide when skirting through stand-still traffic – it's something we'd suggest asking the bike shop to trim down slightly. Coming from a road bike background, the upright position never felt like I was compromising too much when riding at speed, nor did it feel too stretched out to enjoy cycling at slower speeds. Accelerating from a standstill did take a little work as a result of the heft of the bike, however, maintaining speed was easy.

Whilst it's easy to bork at the price tag associated with the SC6 DLX, it's worth taking the competition into account. Compared with the similarly priced super commuter, the Cannondale Bad Boy 1, the Fairfax, matches, if not exceeds, its peers in terms of included extras and configuration.

The Ergon contact points were faultless in operation. The grips were tacky to touch and the ergonomic design distributed pressure evenly across both hands. The SM30 saddle stands well above anything else I've experienced as a stock offering on a commuter bike. Featuring a wide flat nose, pressure relief channel and contoured top designed to cup the sit bone, the seat never required the use of chamois equipped bike short over and never left me with soreness despite sometimes riding for upwards of two hours at a time. 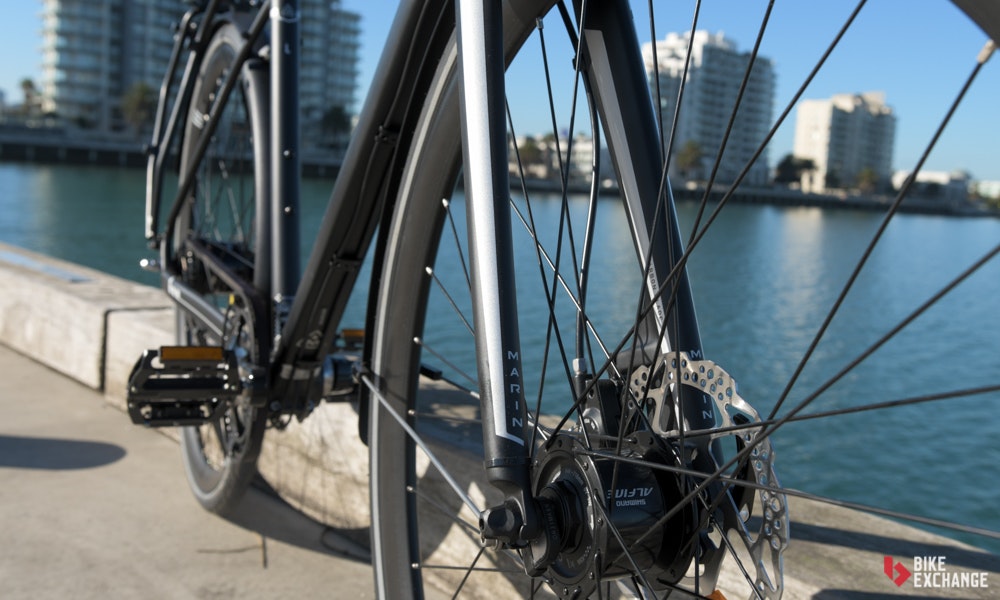 The Shimano hydraulic disc brakes offered excellent stopping power and control (modulation) across a range of conditions. The 32c wide Schwalbe tires soaked up road buzz well and whilst we weren’t too keen on seeking out glass, nails and other sharp objects to test out the puncture resistance, it's worth noting that the additional protection didn’t affect rolling resistance too drastically. In terms of tire clearance, there are no official limits quoted by Marin, however, with the fenders fitted, there was room to go a little bit wider should you want more roll-over ability.

Lugging loads when commuting never posed too much of a drama with the supplied rear rack capable of carrying up to 20kg. If there is one criticism of the rack itself, it is a little on the narrow side which can make balancing wider loads (like a case of beer) a little more precarious.

With a belt drive system, battery free lighting and a pimped out component list, splurging the additional cash for this deluxe model won't go to waste. The Marin SC6 DLX is a bike worth serious consideration for commuters and fitness riders using a bike as their sole means of transportation. Whilst priced similarly to an entry-level electric bike, the general lack of maintenance this bike requires is enough to convince prospective buyers that there’s still a lot of sense, and joy, to be had from an analog bike in a digital world.

The Marin SC6 DLX is available in select stores at a recommended retail price of $2,349.99. There are five sizes available; extra small, small, medium, large and extra-large. Our main tester is 184cm and rode a large. And if you're unsure on if this style of bike is right for you, read our comparison in how urban bikes differ from flat bar road bikes and hybrids.