Find a store Blog
‹ back
Home
Blog
Features
Listen up: Why cyclists are at risk of hearing loss

Listen up: Why cyclists are at risk of hearing loss 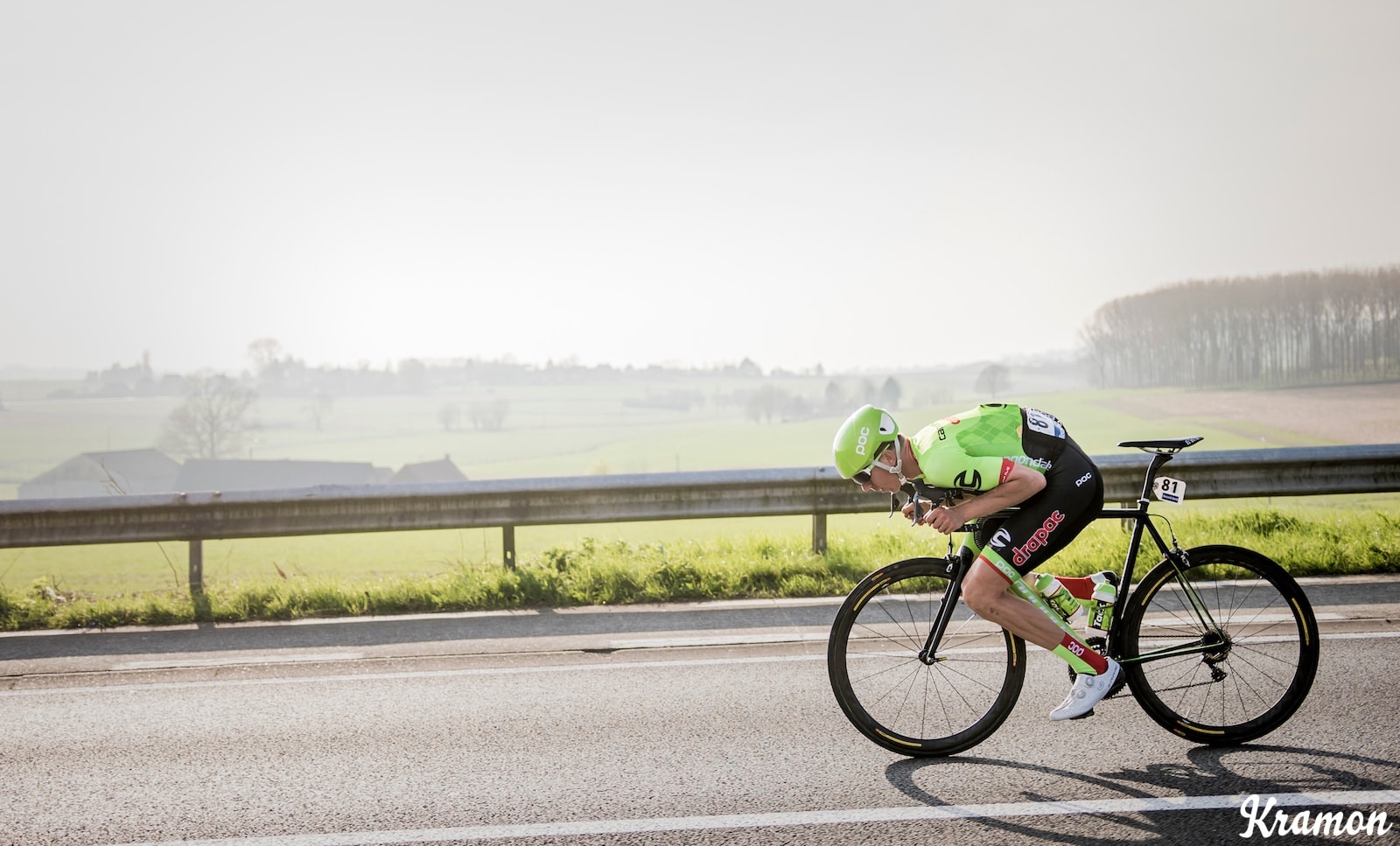 It’s something we’ve all experienced. You’re out riding with your mates, trying to hold a conversation as you tap along. You head downhill, or the wind picks up, and before too long you find yourself yelling just to be heard over the wind noise.

It was this very experience that prompted American ear surgeon1 Dr Michael Seidman to investigate whether wind noise could be causing potential hearing loss among cyclists. He was out for a ride one day with his brother, Steve, on what was a quiet stretch of road, when he found himself yelling just to be heard.

“I realised we were screaming at each other and I never realised how noisy it was,” Dr Seidman told CyclingTips. “And I’m thinking ‘It’s pristine, silent out here, and it’s so noisy!’ You hear the [makes whooshing sound] of the wind noise.

“So that’s what prompted it. I had a suspicion it was noisy because I’m an ear surgeon, that’s what I do. Everything about me is soundproofing things and trying to make things quieter.”

As cyclists we tend to dismiss wind noise as simply just a part of riding, more or less ignoring the issue entirely. But with his study, Dr Seidman set out to find out whether we cyclists can afford to be ignoring wind noise.

Dr Seidman set himself up inside the Ford Motor Company wind tunnel in Allen Park, Michigan, sat on his own bike, wore his own helmet, and attached a microphone next to each of his ears. Then he and his colleagues recorded the noise levels over a range of wind speeds and directions. 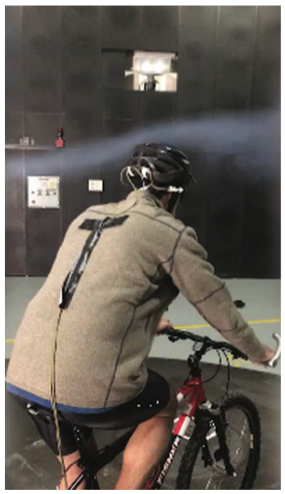 At each of the 15-degree increments Dr Seidman’s team recorded the sound pressure level for 15 seconds, at each ear. Smoke was used in the wind tunnel to help observe the wind flow.

What Dr Seidman and his fellow researchers found was rather troubling.

So how significant a risk does that pose?

“And you think you’re quiet — you’re not listening to personal listening devices, you’re not doing anything, but even at 16 km/h an hour you’re are actually causing some noise trauma to your ears.”

While most riders won’t get to 100 km/h on the bike, they don’t need to in order to start doing damage.

“If you think about riding downhill at say 48km/h into a 16km/h headwind, that’s 64km/h. That’s 108dB of sound. That’s very routine for people to get,” Dr Seidman said.

That’s louder than a jackhammer working just a metre away.

Even riding at 16 km/h, with wind noise reading 85dB — the equivalent of standing 10 metres from a road with heavy traffic — starts doing potential damage in a surprisingly short space of time.

“Riding at 16 km/h for an hour is technically causing some potential hearing loss,” Dr Seidman says. “My analogy is if you smoke one cigarette you’re probably not going to get a lung cancer; if you smoke three packs of cigarettes a day for 30 years you probably are, right?

“It’s just like if you work in a radiation environment you’re allowed a certain amount. Zero is better than any amount and less than 85dB is better than having that exposure.”

One of the most surprising findings to come out of the study was that the ear furthest away from the wind source was actually at greater risk.

“The downwind ear receives higher sound by about five to seven dB louder, roughly speaking,” Dr Seidman said. “And it makes no sense because the wind’s blowing into your left ear but the Ford Motor Company engineers said “Oh yeah the downwind side is always louder because of the eddy currents and the turbulent flow.

“So it hits your helmet, comes around and there’s some turbulent flow there and you get kind of an acceleration on that side. So that was one really interesting finding.”

The sound pressure levels at the upwind and downwind ears differed by as much as 20dB at higher wind speeds.

One of the limitations of Dr Seidman’s study was the fact it was conducted in a controlled lab environment, rather than out on the road. In the real world, objects on and near the road affect the wind and wind noise reaching the rider — objects such as trees, cars and fences.

There’s another limitation to the study: the fact that, when measuring the noise level in crosswinds — i.e. when the rider is positioned at any angle other than 0 or 180º — the rider’s forward movement isn’t necessarily accounted for. For example, if the wind is coming directly from the rider’s left, the noise recorded in the study is only the result of the crosswind and doesn’t take into account the speed the rider would be travelling at (and therefore the wind noise coming from straight on).

Dr Seidman acknowledges this limitation, saying that in the real world the rider would be subjected to even more wind noise.

“You’re probably doing more harm, if you will, from a loudness standpoint in the real world than you are here [in the wind tunnel],” he said. “This is probably a best-case scenario.

“[In the real world] you’ve got a kind of a double whammy and then you have to start doing wind vector physics, which was beyond the purpose of this paper.”

The logical next step in the research is to take the experiment out onto the open road.

“What I’d like to do is dosimetry. Just go for a ride and wear something that can monitor [noise levels],” Dr Seidman said. “It’s kind of expensive technology but sort of like a radiation badge for somebody who works in an X-ray area — they make you wear these badges and every week or month they record how much radiation you’ve been exposed to. There are dosimeters for sound as well.

“If somebody gave me the appropriate equipment I’d start monitoring it but I haven’t asked anybody for that. It’s not on the top of my research list at the moment. We’ve just basically proven riding your bicycle is hazardous to your ears and [you should] wear ear protection.”

So what does that ear protection look like exactly?

“The obvious thing is, if you don’t want that exposure, wear earplugs,” Dr Seidman said. “Typical earplugs will mitigate your noise by about 17 to 25 dB of sound. So if you’re at 100dB you could say that you’re going to be getting about 75dB.”

Of course, that’s not a terribly practical or safe solution out on the road2.

“It’s not a good idea to wear earplugs when you ride — you can’t be aware of your surroundings,” Dr Seidman said. “So that’s illogical.”

There are other solutions, however.

“I think you could design helmets — and actually I had a provisional patent pending that I kind of gave up on because a few people out there were looking at wind noise reduction for cyclists — that had ear protection in the front that would streamline it away from you. I think that would be very helpful.”

And there are accessories on the market which already do a similar job. Cat-Ears is one brand creating such accessories.

“Basically you put these little things on the side of your either glasses or on your helmet strap and it kind of deflects the noise and actually lowers the amount of sound,” Dr Seidman said. “I can’t tell you precisely how much the Cat Ears reduce the sound — “reduce wind noise by 40 to 60%” is what it says, but I don’t know what that equates to a decibel amount. But I think it’s reasonable to do things like that.” 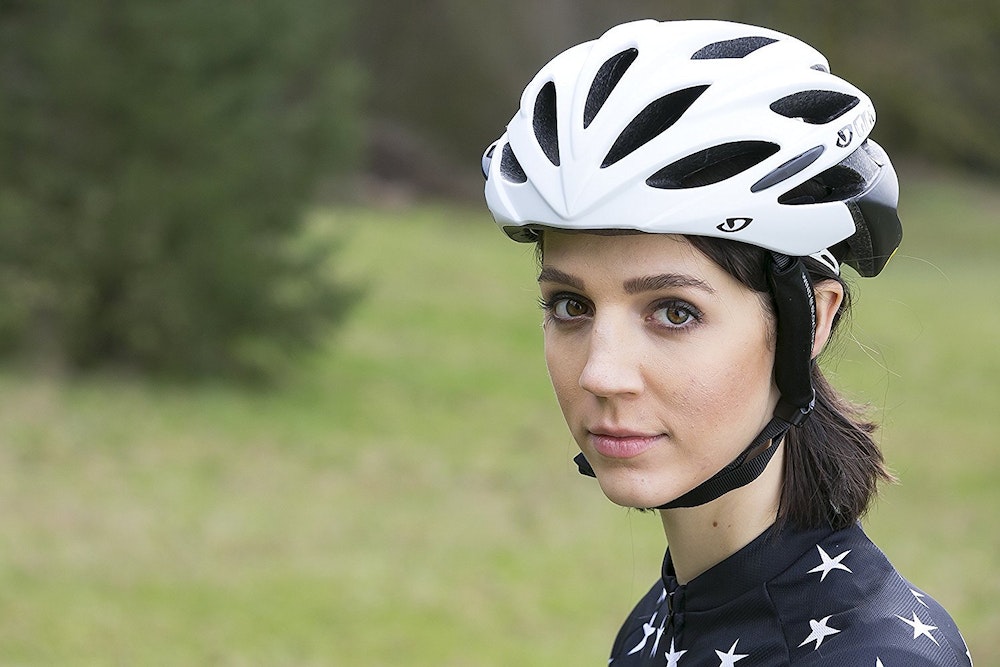 An example of a noise-blocking accessory, this one from Wind-Blox. (Image: Amazon)

Of course, it’s worth noting that we road cyclists tend to be a fashion-focused bunch — many riders would likely baulk at the idea of wearing such accessories. And while he seems less concerned about aesthetics, Dr Seidman admits he too hasn’t yet taken steps to protect his ears while out riding, despite the findings of his study.

“I’m a little too lazy and so I have not,” he said. “[But] 16km/h is noisy enough to cause damage and if you have a way of mitigating that damage without hurting your external awareness to sound, why wouldn’t you do it?”

1. Dr Michael D. Seidman is director of otologic/neurotologic/skull base surgery at Florida Hospital Adventist Health System and Professor of Otolaryngology Head & Neck Surgery at the University of Central Florida.

2. While headphones would theoretically reduce wind noise, they too have the potential to reduce a rider’s situational awareness:

“You know you think about how many people are out there running on trails, riding their bicycles, they have their iPads on and they’re blasting the music and they can’t hear you coming up behind them and then they’re startled and they’re mad at you,” Dr Seidman said. “And it’s like ‘Well, turn down the volume!’ I get it — people want to be in their own zone, their zen, they’re riding, they’re running, they’re walking fast but you can’t make it so that you … I mean people do it all the time … but my suggestion is don’t make it so you can’t hear your surroundings.”

3. In several studies over the years Dr Seidman has shown that the use of various nutritional supplements “may reduce some of the aging processes involved in the ear 2) may slow the rapid loss of hearing in those predisposed to premature hearing loss 3) protect against microscopic damage to the receptors in the inner ear after impulse or chronic noise trauma and 4) in some cases improve hearing in some cases.”

4. In fairness to Dr Seidman he currently has 17 active research projects on the go, is involved in age- and noise related hearing loss studies, and lectures internationally on the subject. Perhaps not “lazy”, but just “busy”.