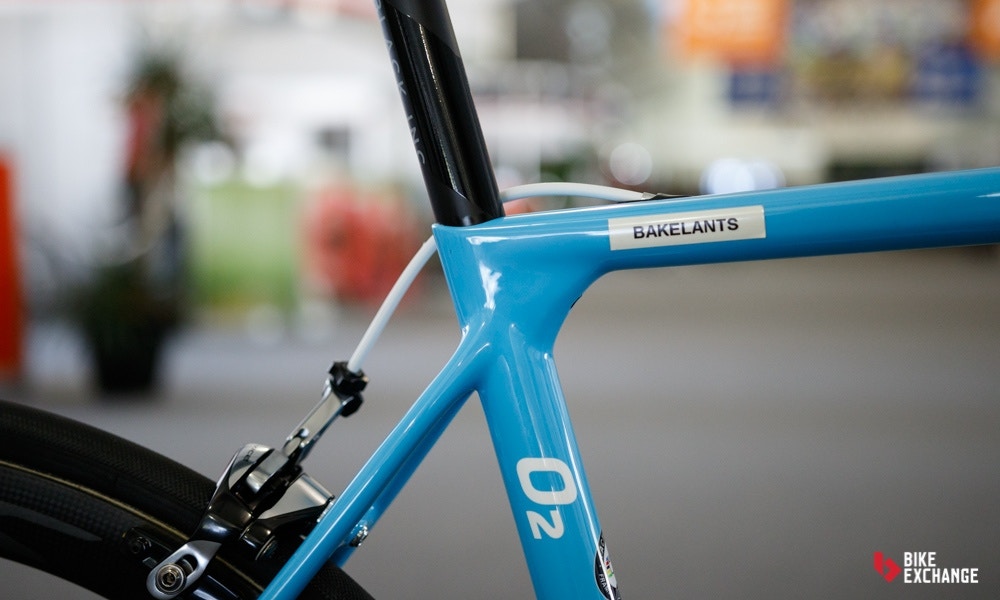 Factor bikes are a new player in the WorldTour game, sponsoring AG2R La Mondiale for the 2017 season. The French team made the switch from Focus bikes to Factor in the off-season and at the first WorldTour event of 2017, the Santos Tour Down Under, all the riders were onboard the 'O2', Factor's lightweight bike. As well as changing bikes, the team has also changed groupset (SRAM to Shimano), wheels, (Zipp to Mavic), cockpit components (Zipp to Black Inc.) and power meters (Quarq to SRM) in 2017.

We were on the ground at the Tour Down Under and managed to borrow Jan Bakelants' bike for a brief moment to get a look at his specific set-up and take some close-up shots. Factor have been around for a number of years, initially launching as a showcase for motorsports company bf1 systems. They created some extravagant one-off creations, including the One-77 with Aston Martin that cost an astonishing £25,000 or approximately AUD$50,000!

Since that time, the company has changed hands, being bought by Tour de France Green Jersey winner Baden Cooke and Rob Gitelis. The newly formed Factor Bikes has since come out with its first production bike with the help of British Road and TT champion and multiple Grand Tour stage winner David Millar, who provided plenty of design input to help develop the bikes to the point where they are now a part of a WorldTour team.

The 30-year-old hails from Belgium and has been a professional bike rider since 2009 with some impressive wins in that time, the most famous being a win on stage 2 of the 2013 Tour de France, which also gave him the overall lead and the yellow jersey for two subsequent stages. Jan has ridden with AG2R since 2015 and is a versatile rider that generally performs well in the Ardennes races and also as a strong domestique in the mountains for the likes of Romain Bardet. Standing at 1.77m tall and weighing 67kg, Jan has opted for a 52cm size frame. Factor claim the frameset for the O2 weighs only 740grams which matches perfectly with the kind of bike a team with high GC ambitions requires. Despite its low weight, the frame features subtle aerodynamic design and can accommodate 28mm rubber which could make it the choice for the Classics races as well as the mountains. Making the switch from SRAM to Shimano for their groupset, Jan now has the Dura-Ace Di2 9070 with the (now) standard 53/39 chainrings paired with an 11-28 cassette. The power meter has changed as well, SRM providing the team with their data which is displayed to Jan via the PC8 head unit. Interestingly, the team will soon use the new ultralight SRM carbon power meter, but at the time of taking these photos, they hadn't yet been received. However, we were able to get a look at one in action on a bike belonging to Rob Gitelis, one of Factor's owners. Wheel provider Zipp have also been swapped out, with Mavic taking over. The mid-depth Cosmic Pro Carbon SL tubular wheels are used with the Continental Pro Limited tubulars, which are popular with many other teams. Zipp has also been bumped as cockpit component provider with Black Inc (same ownership as Factor) taking over. Jan is running a 120mm length stem. Jan's bike is rounded out with high-quality CeramicSpeed bearings located throughout the bike; Elite provide the bottle cages and a Fizik saddle in team issue colors. Also, you may have noticed the somewhat basic solution to get Jan's name on his bike. The temporary solution is likely thanks to a label maker and more authentic name decal probably isn't far away.