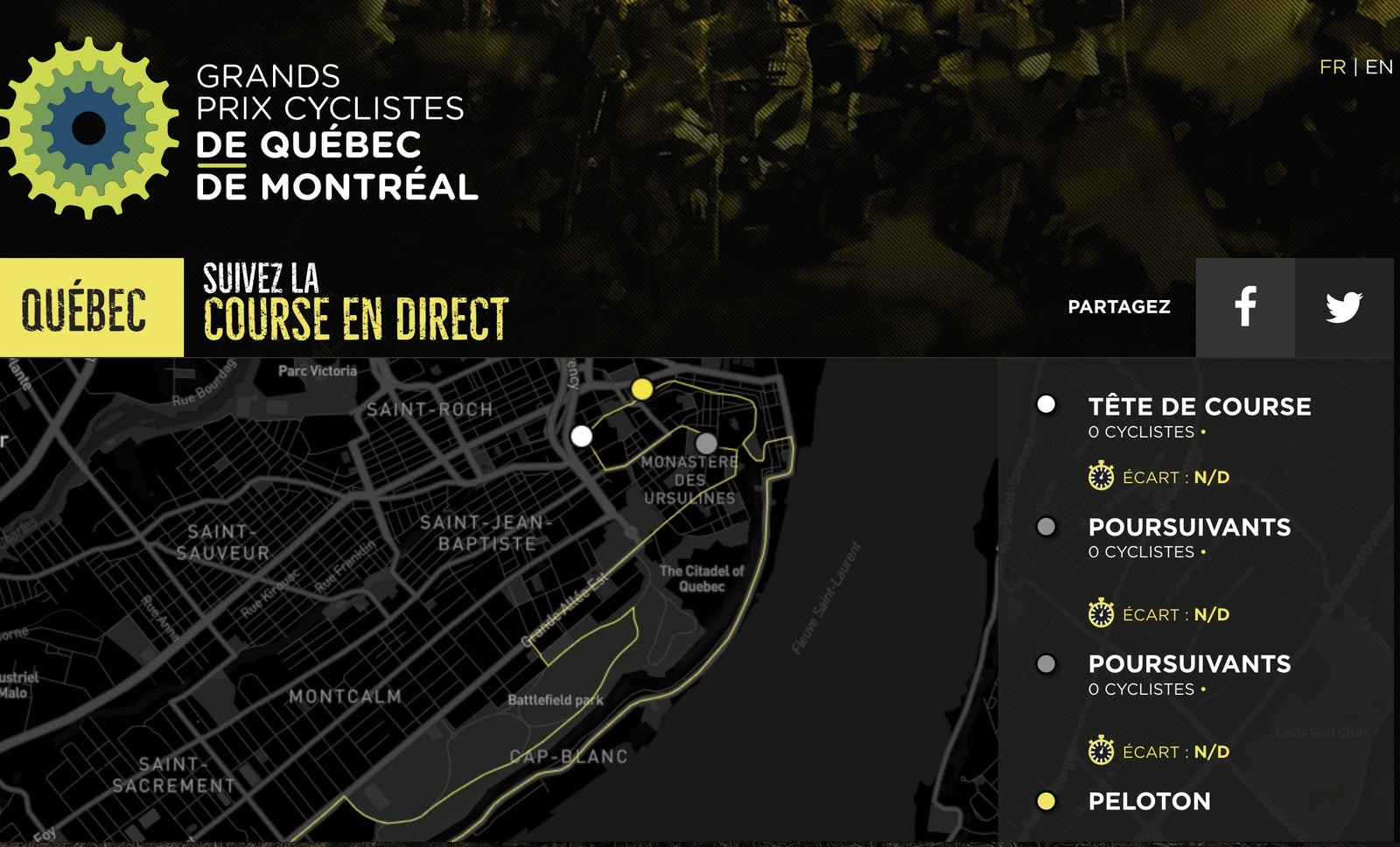 For a fleeting moment, the Canadian Grands Prix Cyclistes appeared to offer a WorldTour viewing experience worthy of the 21st century.

An official race website streamed the GP Québec for free online, even outside the host country, with live GPS tracking displayed on a graphic of the race circuit, up-to-the-minute weather details, and biometric rider data supplementing the stream.

It didn’t last. At least not all of it.

The live biometric data initiative, the product of an agreement between the race organizer, Velon teams, and a few others, suffered technical problems that knocked the project offline immediately. An attempted fix failed to materialize in time for Sunday’s GP Montréal.

The website’s free global broadcast didn’t continue to Montréal either. By midday Sunday, U.S. viewers were greeted with a message notifying them that the stream wasn’t available in their location. According to Marcel LeBlanc, vice president of the Grands Prix Cyclistes de Québec et de Montréal (GPCQM), the organizers have TV deals in place restricting the online broadcasting rights outside of Canada, at least for this year.

Widening the reach of a free online broadcast is indeed an eventual objective for the organizers, but international availability of this year’s official Québec stream was, apparently, a mistake.

And so, what appeared to be a revolutionary WorldTour viewing experience lost a fair bit of luster by the time BMC’s Greg Van Avermaet crossed the finish line on Montreal’s Avenue du Parc. And yet, it’s hard to be too critical. For one, Sunday’s Canadian-only, no biometric data online broadcast was still excellent. And the possibility that Friday’s promising beginning might one day actually be the norm for a WorldTour race? It’s more than worth the fits and starts.

If cycling is to grow its market share in the coming years, or even retain the niche market it currently holds, an improved broadcast strategy is critical. Enhancing the content and broadening the scope of access are the future that cycling needs to embrace, and quickly. GPCQM president Serge Arsenault appears to understand that.

“Even in 1988, I was with Hein Verbruggen saying, ‘We have to move,’ but now we’re 20 years too late versus other sports outside of cycling,” Arsenault told CyclingTips. “We’re just catching up on all the time that we didn’t do anything due to lack of money, lack of vision. Now we have to catch up, and we have to do it the right way.”

A free online viewing experience is part of his approach.

“You won’t make money with people that will pay to look at you via internet. You will make money if you can bring them your sport at a certain level [of quality],” he said. “If we have content and an audience, web and all the others that you can think of, then maybe we will have some card to play with a major international sponsor.”

“Maybe the web content for 16 races that will make a deal together to have the same content for the races — good content, web content. And a part of the money will fall into the teams’ pockets, and the riders’. We have to split the profit if we have profit from the sponsors. Not from the users. The users are the reason why the sponsor would be interested.”

Arsenault’s ideas are refreshing, if a bit unconventional. He’s in rare company as a race organizer talking profit-sharing and free access. But his alternative model sounds promising compared to what the current model will offer in the near future.

WorldTour race organizers are an inherently conservative bunch, and why wouldn’t they be? Mostly controlling the sport’s major revenue streams, they have all the power now, which is obvious any time there’s a big dispute among the sport’s major stakeholders. But what happens if a major revenue source starts to dry up? What happens when TV networks stop shelling out the big bucks for broadcast rights to races because nobody is watching TV anymore?

While many of Arsenault’s colleagues (ASO in particular) are busy playing hardball with teams and the UCI over reforming the WorldTour calendar and licensing system, more and more fans have become “cord cutters” every year, dropping cable or satellite packages. This is especially true in the United States, which remains a woefully under-tapped market for professional cycling. And it will likely stay that way if cord-cutting trends continue and cycling’s biggest races don’t adapt.

Free (or at least extremely inexpensive) online broadcasts are the future. For better or worse, today’s viewers have become accustomed to easy access to everything online, even if that means resorting to piracy.

With race broadcast rights divvied up across multiple broadcasters, charging varying amounts to subscribers, with no uniform online presentation of the events that comprise the WorldTour calendar, American fans have made themselves familiar with low-quality pirate streams as the only reasonable way to watch international racing.

Some organizers have already welcomed free online distribution. In pairing up with TourTracker to offer a free, sponsor-supported online viewing experience, a race like the Larry H. Miller Tour of Utah can jump ahead of the curve. It’s time for the WorldTour races, ostensibly the most important events in cycling, to follow suit to justify their position at the top. Peter Gray keeps an eye on the performance of the Dimension Data live-tracking during stage 10 of the Tour de France.

And enhancing that viewing experience with live biometric data would be a great way to appeal to the tech-savvy (and rapidly growing) audience of cord-cutters. Particularly in countries like the United States and Australia, where a massive share of pro cycling fans are themselves avid cyclists, it’s a natural development. Watts per kilogram, and beats per minute, mean that much more to a viewer who already has a sense of their importance.

With all that in mind, there’s plenty to be excited about in the wake of the Canadian GPs, and recent developments across the sport. Well before the races in Canada, Velon teams were already testing out live biometrics at the Tour de Suisse. The Tour of Utah is one of several lower-level races already available all over the globe online. NBC Sports has dipped its foot into modernity by offering American fans a relatively inexpensive online package to watch a specific selection of races into 2017. And while the execution this year left much to be desired, the GPCQM organizers are at least making serious attempts at progress.

The live biometric data didn’t work, and even if it had functioned properly, it would have been of limited utility without information on each rider’s peak wattage and average beats per minute, not to mention a commentator with the expertise to interpret the data.

Still, the simple fact that Grand Tour contender Fabio Aru was comfortable with the thought of broadcasting his biometrics to the world is a huge step forward.

The reach of the official web broadcast shrank dramatically for Sunday’s race when the Canadian GP’s website began restricting access to Canadian viewers only. Still, the organizers’ commitment to increasing online access the world is real, and that free Canadian broadcast direct from the organizer was a step in the right direction.

They may be baby steps, but the Canadian GPs are at least taking steps forward, which is worth something.

Consider the possibility of pulling up letour.com in your browser from wherever you are in the world to watch Aru battling Nairo Quintana and Chris Froome on the slopes of Mont Ventoux via an onboard camera with live wattage data on the screen and a data-savvy commentator calling the action. That’s a viewing experience worthy of a 21st-century cycling fan.

It’s still a long way off, but at least there are signs that it’s inching closer.