Giant’s new entry-level endurance road bike named 'Contend' has replaced the alloy series of the immensely popular Defy range. The ‘All-rounder’ has design elements of the endurance orientated Defy and elements of the racier TCR and Propel, producing a cost effective, well rounded package to cater for the majority of road cyclists.

Who’s it for: A genuine all-round bike that will cater for the majority of riders looking for a high-value ride

What we like: Almost everything... drivetrain, disc brakes, handling, wheelset, and it looks like a top tier bike

What we don’t: Proprietary brake system that's not compatible with other stems, also inhibits accessory space on handlebar The Giant road performance range previously consisted of three distinct bikes; the lightweight TCR, the aerodynamic Propel and the endurance orientated Defy. The Defy range was further split into carbon and alloy versions. New for 2017 is the Contend which replaces the alloy Defy range. Although it's replacing the endurance orientated Defy bike, the Contend is pitched as an 'all-rounder' featuring design aspects of all three of Giant's road performance bikes and is available with or without disc brakes. For this test we had the Contend SL 1 Disc, an approximate replacement for the 2016 Defy 1 Disc. The Contend SL frame is built from double butted ‘predominantly’ 6011 alloy, referred to as ALUXX SL grade aluminium. For those unfamiliar with the term ‘butting’, it refers to the machining of the tubes to remove material from the center, essentially reinforcing the tube ends to keep the frames strength without the additional weight. Rounding out the frameset is an Advanced-Grade Hybrid composite fork, something most other brands would refer to as 'carbon fiber'.

The ‘Compact Road Design’ that Giant introduced 17 years ago is still being put to good use on the Contend. The basic premise of the design is that smaller triangles will create a lighter, stiffer bike. Using smaller triangles saves weight as less material is required, and the shorter tube lengths are less prone to flex resulting in greater stiffness. It's a simple concept that has served Giant well over the years.

To maintain the Defy’s endurance theme and comfort, the Contend has the proprietary ‘D-Fuse composite seatpost’ to aid compliance and reduce road vibration. The headtube length is longer and the frame reach reduced in comparison to the Propel and TCR to provide a more upright riding position, further aiding comfort. But don't think that the Contend's geometry is taken straight from the Defy blue print, far from it.

The Contend's chainstays and wheelbase are one-centimeter shorter when compared to the Defy hinting that it will be more nimble and have more responsive handling which is further complemented by the relatively steep head tube angle, which is only 0.5 degrees slacker than the ‘Race’ TCR and ‘Aero Race’ Propel. Traditionally endurance bikes would have a slacker headtube to provide slower steering and more comfort, something closer to 71 or 72 degrees for a 56cm frame. The reach is reduced while the headtube length is increased in the Defy and Contend to put the rider in a more upright position, more in line with traditional endurance frames. As well as the standard endurance features mentioned above, the Contend has many other features normally only associated with performance bikes. The Contend SL has internal cable routing improving the aesthetic and Giant’s ‘OverDrive’ tapered steerer tube to enhance handling through increased front end stiffness. Power transfer is optimized thanks to an oversized bottom bracket / chainstay area that Giant refer to as ‘PowerCore’. Asymmetric chainstays further improve performance by providing additional stiffness on the bikes driveside and greater stability on the non-driveside. A quick look at the rear of the bike and the difference is plain to see, the driveside is dead straight while the non-drive side bows out to the side to cater for the disc brakes. The performance tech continues with the ‘MegaDrive’ which is Giant’s descriptor for the ‘massive’ rectangular downtube that connects the front of the bike to the ‘PowerCore’.

The frame is topped off with built in mounts for fenders or racks, perfect for those looking to commute or go touring. The Contend SL 1 disc features integrated flat-mount disc brakes that are activated via a 'semi-hydraulic' braking system. The braking system is an interesting one, sitting proud on the handlebar / stem area is a hydraulic system made with help from brake experts Tektro that links to cable actuated levers. The cables from the levers link to the adapter which then converts to a hydraulic system at the actual brake caliper. The idea behind this is to find a way to bypass the compression and friction of a mechanical cable braking system while still providing the 'normal' brake / shift lever. Introducing the cable shaves a little weight from the whole system and allows the regular Shimano 105 levers to be used.

The downside of such a system is stem compatibility, yes you can change sizes, but only within what Giant offers that model in. Hypothetically if someone needed a riser stem, they'd be out of luck. The drivetrain is Shimano's workhorse 105 11-speed with a traditional compact set up: 50T large chain ring and 34T small chain ring. This is paired with an enormous range 11-32 cassette. This extended range provides easy pedaling ratios for long days in the saddle, relaxed commuting, or tackling the steepest and longest of summits. As we've mentioned, despite the hydraulic disc brakes, the hoods are the traditional and well-proven 105 meaning they don't have the bulk that a fully hydraulic system would. Giant's PS-2 disc specific wheelset, paired with P-SL 25mm tires provide the platform for the Contend. Interesting to note that the same wheel / tire combo features on the TCR Advanced 1 Disc and the Defy Advanced 2, both of which move into the next price bracket. The wheels use Sapim race spokes and Giant's own hubs with sealed bearings. The tires measure 26.7mm on the rim at 80psi which should go a long way to providing a comfortable ride and smoothing out excess road vibration. On paper this bike reads so well, an entry level bike with Shimano 105, disc brakes and a high quality frameset. In the flesh it took another step forward with a matte black finish, bright orange highlights and deepish profile wheels that make it look like a top tier bike, or at least much more than an entry level bike. Once on the bike, the performance matched the expectation.

The standout feature for me was the comfort. There is a perception that alloy bikes deliver a harsh ride but I didn't find that the case at all. The Contend effectively dulled most of the road vibration I would usually experience on my own stiff as anything aero bike. In addition to being comfortable it's rather agile and handles better than I expected. The decision to reduce the chainstay length and consequently the wheelbase provided sharp handling and gave it a much more performance feel over one of endurance. This was especially noticeable dropping it tight into corners and trying to power out. The rear of the bike responded really well and although it doesn't have the beefy bottom bracket area of the Propel or TCR, it still felt like the power I was putting in was being put to good use.

Jumping out of the saddle of steep climbs was another moment where the tight rear triangle came into play. When you're sitting on the bike, the taller headtube still makes it feel like an endurance bike, but once you jump out of the saddle that feeling is gone and there is just this feeling of control at the rear. Moving the bike around feels sharp and at no stage did I feel like I was churning or working overtime to get the bike to respond. The choice of Shimano 105 groupset is perfect. It's reliable, durable and is 'entry-level' only in name. The choice of a compact crankset paired with an 11-32 cassette also gets a big tick, it allows for the Contend to be used for so many purposes and doesn't preclude any type of rider. As we've mentioned the hydraulic adapter allows for the use of standard 105 shifters which is probably the best part of the 'semi-hydraulic' system. I've always found the extra bulk of hydraulic levers disconcerting and could never find a comfortable hand position. It also means the actual 'feel' of the brake is what most road riders are accustomed to and allows Giant to equip this bike with 105 and hydraulic brakes at a fair price.

I haven't gone into much detail regarding the wheelset and that's because they mostly went unnoticed which is a good thing in my book. They rolled smoothly, handled confidently, didn't get adversely effecting in any cross winds, and suffered no noticeable flex when put under load. The Contend frame certainly offers more clearance for larger tires which may be the preferred option for adventure riding or touring, both of which I'm confident this bike could handle.

In summary, I was remarkably impressed by Giant's latest all-round offering. I'd have no hesitation choosing this if I was after a do-it-all bike at a high-value price. If your budget is under $1,500, you won't be disappointed with this ride.

The Contend SL 1 Disc is available in sizes XS, S, M, M/L, L, XL and tips the scales at 9.2kg (without pedals and bottle cages). The MSRP is $1,315. Also available are the disc equipped Contend SL 2, and Contend 1 and 2 which are both rim brake options. The Contend SL frameset is also available to purchase separately. 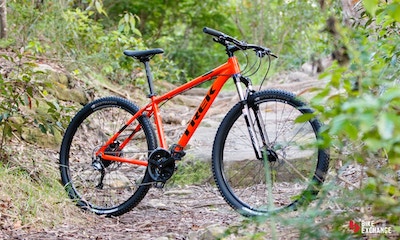