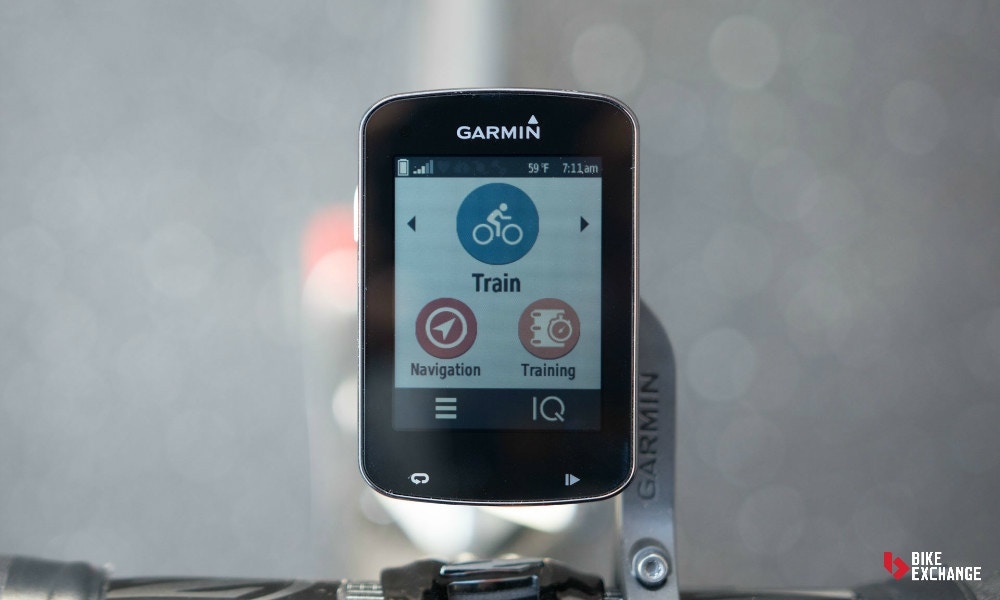 The 800 series traditionally sat between the 500 and 1000 series', but the latest iteration arguably combines the best elements of both; navigation, advanced training metrics, performance tracking, touchscreen, real time information, all presented in a smaller, sleeker package.

CyclingTips’ Australian editor Matt de Neff will be testing and reviewing the Garmin Edge 820 over the coming weeks. We were able to get our hands on the new unit for a brief moment to get an idea of what it's all about before Matt’s full review is released on CyclingTips. The biggest change from the previous Garmin 810 is undoubtedly the size. The 820 Edge is now the same size as the recently released Garmin 520 rather than being in between the previous 510 and 1000. It weighs in at 68 grams and has a 2.3in display screen. Far from just being the 520 with some extra features, Garmin has seemingly taken some of the feedback from the 520 release and made significant adjustments.

When Matt reviewed the 520, he commented on the lack of touch screen and reversion to buttons as the primary source of navigation.

While the touchscreens on previous models weren’t perfect (the 510 in particular), I found myself missing the touchscreen on the Edge 520. In a world of smartphones, tablets and phablets, going from touchscreens back to buttons feels like a step in the wrong direction.'

The 820 has remedied that with improved touch screen functionality and three buttons in total (one power and two function buttons). As well as touching the screen to select an option, you can now swipe down to access the navigation screen to check the unit's connection status to GPS and any sensors. The 820 looks clean and sophisticated from any angle. A combination of two programming buttons, a power button and touch screen is used to navigate.

While the size of the unit has reduced, the internal storage has been beefed up to 16gb which will be a welcome addition for those that regularly upload maps. Bike specific navigation is available via the built in Garmin Cycle Map that not only points out the quickest and safest route from A to B, but also points of interest along the way.

Assuming you connect to your phone and have the Garmin Connect app, the 820 provides some great features.

LiveTrack has been available on previous Garmin units which allows people to follow you in real time, but an extension known as GroupTrack is now available. The new features allows you to view other connected riders on your screen, making it easier than ever before to meet up, or locate a rider that may have fallen off the group.

A clever video from Garmin shows the GroupTrack function in action

Like previous Garmin units, weather updates, text messages and other notifications can be displayed on your screen, and the 820 can even post an update directly to your social media platforms when you upload an activity. After all, it doesn't count if it's not on STRAVA, right?

A key safety feature from the 1000 is now incorporated into the 820. Incident detection will send a message to pre-programmed emergency contacts (when paired to your Smartphone) when the unit detects an incident. The display screen is simple and color coded to reduce the chance of selecting the wrong option. Three clear options; Profile (which includes Race, Train, Indoor), Navigation and Training present on the home screen with settings and IQ also available in the tool bar at the bottom.

The advanced training metrics and performance tracking features of the 1000 and 520 units, now become available on the 820. The unit can provide your VO2max and FTP, track your watts per kilogram, personal records and even tell you when it's time to take a break via the 'Recovery Advisor' feature.

STRAVA live, which was a revelation, is also available on the 820 for those with a STRAVA Premium account. For those unfamiliar with the concept, once a STRAVA segment has been 'starred' it will be shown to you live on the screen as you ride it, including a countdown to let you know it's coming. Your performance will be tracked as you cover the segment letting you know if you are on track to get a PR or take the KOM or QOM. The battery has had a small overhaul, now featuring ‘Battery Save mode’ which Garmin say will ‘extend battery life up to 50 percent by enabling the rider to wake the display only when it is needed while still tracking the details of a ride.’ A big plus in you ever forget to charge it prior to an long weekend ride. Garmin estimates the rechargeable lithium-ion battery has 15 hours of battery life.