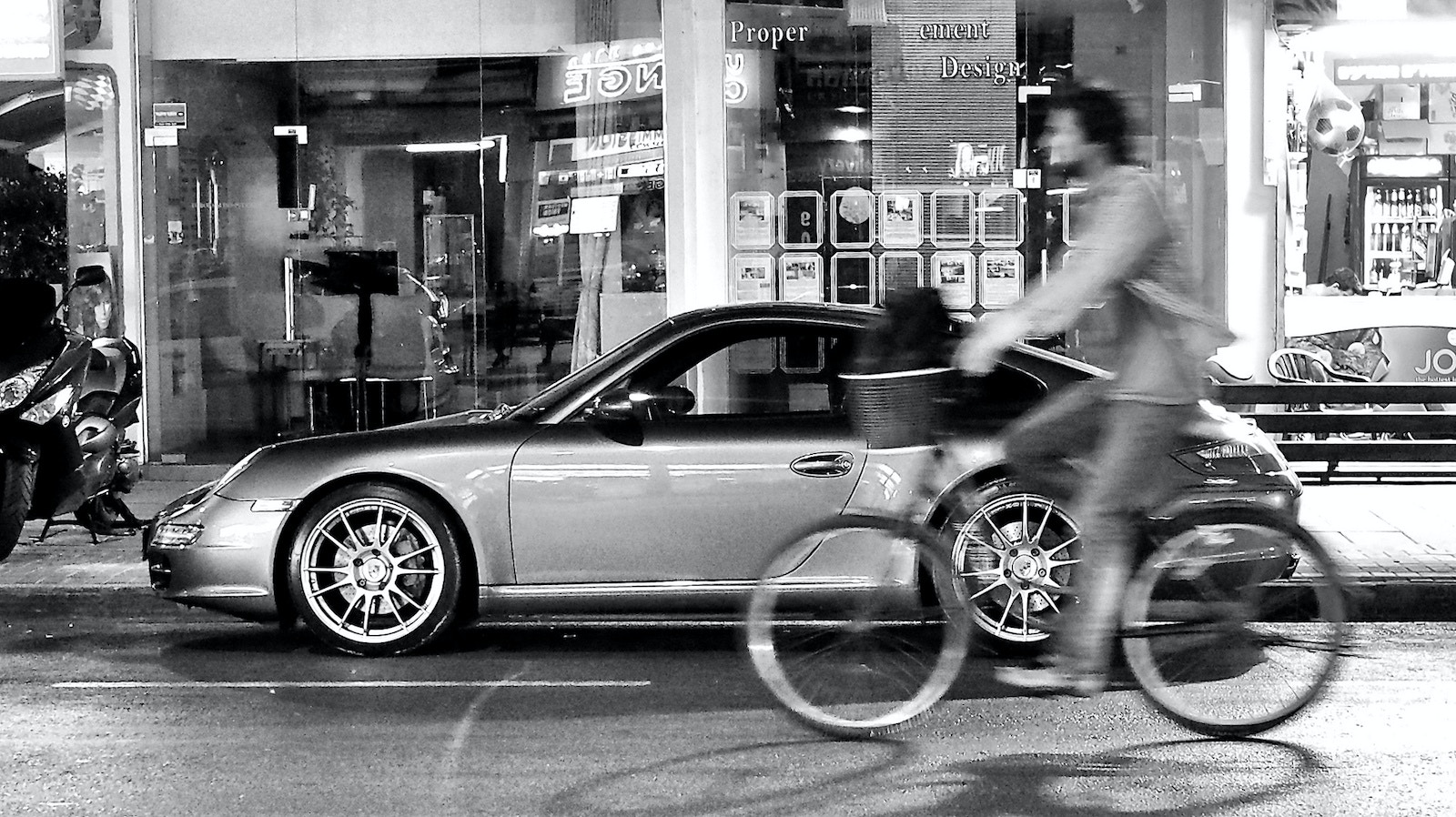 Many of us take it for granted but cycling on the road, in traffic, isn’t easy. Beyond the physical effort required, there’s a wealth of information to process in order to get around safely — traffic signals, the behavior of other road users, road positioning, potholes and other obstructions, to name just a few. This challenge is only amplified in heavily built-up areas, such as city centers.

It’s tempting to think that, as cyclists, we learn to be more observant on the road; that we are better than the average road user at assessing and navigating our surroundings. After all, the cost of inattentive riding can be serious injury, or worse. And if it is the case that cyclists are more attentive road users, it makes sense to assume those skills will put us in good stead when we get behind the wheel.

A pair of researchers have put that particular hypothesis to the test; to see whether cyclists do indeed make better drivers.

Vanessa Beanland, from the University of the Sunshine Coast, and Lisa J. Hansen, from the Australian National University, used an experimental paradigm called “change blindness” to collect the data they were after.

“What you do is you take a photograph and it’s like your classic spot-the-difference type of game that you do as a kid,” Beanland told CyclingTips. “We just change one aspect of the photo and then we show it to people on a computer screen so it flickers back and forth between the photo with a target present and then target absent. And you just put a blank screen in between so that it’s harder for them to detect because if there’s no blank screen it pops out.

Participants in the study were told to press a button when they’d worked out whether the two images being shown were identical or differed in one detail. They were then prompted to report whether the image had changed, and which object had changed.

Beanland admits the experiment was not a perfect analogue for real-world experience, but said that it is “a way of experimentally controlling things so that the only thing you’re changing is what you want to examine.” And the test does mimic a common scenario that cyclists and drivers often find themselves in.

“It sort of represents the situation in which you might come up to an intersection and you look left, look right, you look left again and in the time that you were looking right something has changed,” Beanland said. “And so maybe a cyclist has appeared on your left and you haven’t noticed. So it’s kind of getting at those kinds of processes.

The study involved a total of 42 experienced drivers, 20 of which don’t ride a bike, and 22 that do (so-called “cyclist-drivers”). Beanland and Hansen set out to find whether cyclist-drivers were more accurate at detecting changes to the road environment, and whether they were faster at doing so.

The implication, of course, is that drivers who are more accurate and more efficient at detecting changes to the road environment are likely to be better, safer drivers.

“When we looked at how accurate they were — so this is whether they actually noticed the change or not — there was no difference between cyclists and non-cyclists,” Beanland said. “But the cyclists were on average slightly faster at detecting the changes and this is particularly when the change involved a bicycle or when it involved a sign.”

“We’re biased to pay attention to things that are relevant to us,” Beanland said. “And so for cyclists, they pay attention and they’re always looking out for other cyclists. So we expected that.”

So why were cyclist-drivers generally quicker at detecting changes, compared with non-cyclists?

“The reason we thought that they might be faster overall is that when you’re a cyclist you have a greater diversity of experiences and you sort of have to pay attention to more things on the road because there are more things that can threaten you,” Beanland said. “And so we thought this kind of additional experience would sort of improve just their awareness in general.”

The issue of why cyclist-drivers are better at detecting the addition or removal of road signs is puzzling, though. Particularly given that, generally speaking, drivers aren’t great at noticing road signs.

“We’ve done a few studies now and in every single study that we’ve done people have been relatively poor at noticing changes to signs,” Beanland said. “And there was some research that was done recently, I think in the Netherlands, where they even showed it for variable message signs.

“We thought perhaps it’s the fact that signs don’t normally change, so people don’t expect them to change so they’re just like ‘Oh, that’s part of the furniture.’ But then this recent study showed that even when it is an electronic sign that dynamically updates and you change, for instance, the speed limit on it, people don’t notice because they they just don’t encode it.

“They perceive what they’re use to seeing there.”

Anyone that’s been hit by a car while riding, or had a near-miss, will be familiar with an explanation along the lines of “sorry, I didn’t see you”. As Beanland explains, many drivers simply don’t expect to see cyclists on the road and therefore aren’t looking for them.

“Cyclists are so uncommon that drivers just aren’t thinking of them on a day-to-day basis and that’s one reason why, for people who ride a bicycle, they are much better at detecting cyclists on the road because they’re always thinking about cyclists,” she said. “Your average driver doesn’t; they don’t expect to see them and therefore they don’t notice them because it’s just not something that they’re looking out for.”

As with any piece of research, there were challenges associated with Beanland and Hansen’s study. For a start, there are inherent differences between cyclists and non-cyclists that make it “challenging to conclusively determine the source of [those] underlying differences.”

“People are cyclists for a reason so they could be self-selecting into cycling because they are just inherently kind of better able to pick up things on the road,” Beanland said.

That is, it could just be that a cyclist’s greater efficiency at picking up changes on the roadway isn’t the result of experience as a cyclist; rather it could be that people who are willing to ride on busy road environments are more likely to have greater awareness to begin with.

“It’s this idea that people may choose not to cycle because it is dangerous and they feel physically vulnerable and they don’t feel they’re very skilled at paying attention to everything and keeping an eye out,” Beanland said. “So therefore there could be this kind of survival effect where the ones that we’re getting, who are still cycling regularly, they’ve chosen to do that because they’re good at things like change-detection.”

And there are other complicating factors too.

“Cyclists are also likely to be more physically active than non-cyclists, which has been shown to benefit executive functions, especially working memory,” Beanland and Hansen write in their paper, published in the Accident Analysis and Prevention journal. That is, fitness could contribute to better change-detection as much as riding experience.

Additionally, it could be that the cyclist-drivers were putting in extra effort during the experiment than they might have, to make sure cyclists were seen in a positive light.

“Although participants were unaware of our hypotheses, cyclist-drivers may have been exerting greater effort than drivers in an attempt to portray cyclists as ‘better’ than other road users,” Beanland and Hansen wrote. “The latter issue is unfortunately common in research focusing on specialized groups; given that cyclists comprise less than 20% of the population, it is extremely challenging to recruit an appropriately large sample without specifically seeking cyclists.”

Still, the findings seem to confirm what we might expect — that there is a correlation between being a cyclist and being a better driver. And, as Beanland and Hansen write, this finding has potential applications when it comes to creating a safer environment for vulnerable road users.

“The finding that cycling experience is associated with more efficient attentional processing is encouraging,” they write. “It suggests that it may be possible to improve drivers’ hazard perception through additional, non-traditional avenues such as promoting greater engagement in cycling and other forms of active transport.”