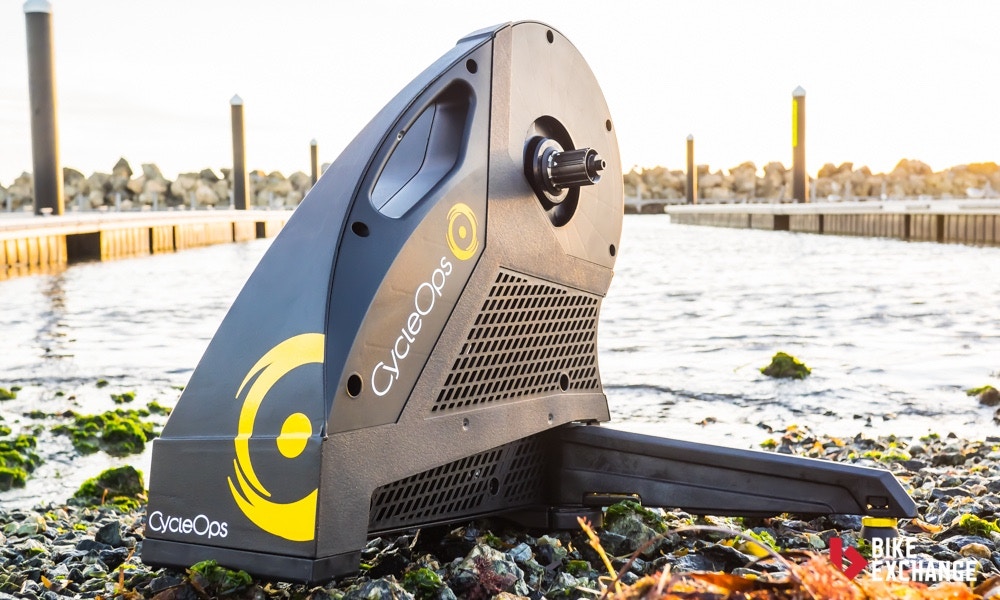 It's not always possible to get outdoors as much as one would like so for many of us means retreating indoors to the comfort and ease of an indoor trainer. To make those miles tick over a little quicker and provide a more enjoyable indoor riding experience, we've seen a surge of high functioning, realistic trainers with 'smart' technology that connect to multiple devices allowing you to customize your workouts from the palm of your hand, or ride against your mates in a virtual world.

One such trainer is the direct drive 'Hammer' from CycleOps that CyclingTips’ Australian tech editor Matt Wikstrom will be testing and reviewing. We were able to get our hands on the Hammer for a brief moment to get an idea of what this direct drive trainer is all about before Matt begins his full review to be released later on CyclingTips.

A quick word on what 'direct-drive' trainers are if you are not familiar with them. Direct drive trainers are not driven by the rear tire like a traditional indoor trainer; instead, the trainer connects to your bike via the rear drop outs, with a cassette (rear cogs) installed directly to the main unit. As a result, they provide a smooth feel, allow you to change gears as if you were on the road and won't wear out your rear tire. Some direct drive trainers will come with a cassette but others (like this one) will require you to either purchase a cassette, or swap it between your bike and trainer as required (not recommended). The CycleOps Hammer sits in the middle of two direct drive trainers in terms of price and features from Tacx we've previously covered; the Flux Smart Trainer and the Neo Smart Trainer, and stacks up well against industry leader the Wahoo Kickr.

In addition to all that power and scale of gradient, the 9kg (20lb) flywheel is said to provide 'quiet, vibration free and true-to-the-road riding experience.' And for those of you wondering about the noise, the Hammer produces 64 decibels at 32kph (20mph). Power and speed data are generated automatically but if you want cadence, then the required sensor is sold separately. As with all good trainers, it's compatible with a variety of devices and third party applications such as TrainerRoad and Zwift thanks to integrated dual ANT+ FE-C and Bluetooth 4.0 technologies. It also connects to CycleOps' own virtual training app that streams real world videos for a realistic training experience indoors. Matt described this as "a nice experience", commenting that the CycleOps' Virtual Training App on an iPad4 "connected to the trainer almost instantaneously, so there was no stuffing around required to get each unit going." Firmware updates can be made via Bluetooth so the Hammer should always be up to date A major advantage of the Hammer over other such direct drive trainers is its portability. Foldable legs mean it can be packed away when not in use, whilst still providing a large enough footprint when in use for a stable ride. When the legs are folded away the unit measures 76.2mm in length, 469.9mm in height, and 495.3mm in width. When the legs are open, the height and width remain the same, while the legs expand ten-fold, to 787.4mm. This system also means there is no assembly required, as Matt says, "the legs fold out, click into place, and fold back to keep the unit compact."

Another advantage is the built-in carry handle that makes this unit truly portable, although at 21.9kg it will still take some effort to do so. Included with the Hammer is a Shimano splined freehub for compatibility with Shimano 8-11 speed cassettes, however, a cassette is not provided. The maximum load is 136kg (excluding bicycle).

Matt has had limited time with the CycleOps Hammer so far but has said it has a "very refined feel, a mix of sturdiness and smooth operation."

While the Hammer is a competitively priced trainer for the performance it provides, if the additional cost of a direct drive trainer is prohibitive, Matt is also reviewing the tire drive trainer from CycleOps, the Magnus, with an MSRP of $599.99. Early impressions are good, Matt says, "what you see is what you get with this trainer. Very familiar rear-wheel drive design with a smart resistance unit and very nice pedaling action." So keep an eye on CyclingTips for the full review of both trainers.