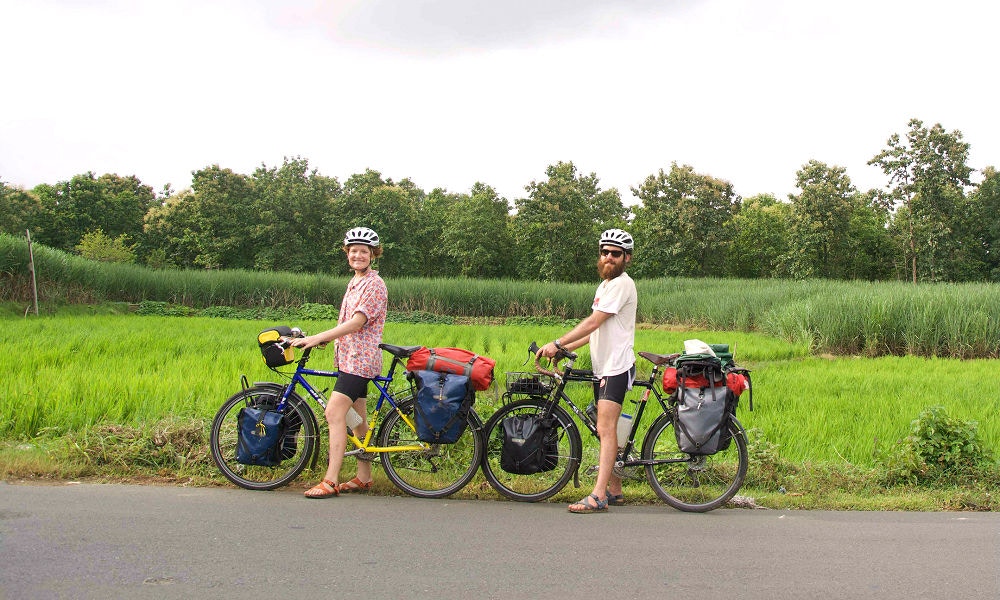 Hello there! We are Tim and Henrietta hailing from Melbourne, Australia, writing to you from a monsoonal India where we’ve started a six-month long journey by bicycle to Turkey. We’re riding fully-loaded touring bikes carrying all the gear necessary to allow us to camp, cook and navigate our way along the Silk Road. Our route began in Bangalore, India and will take us north across India into the Himalayas where we’ll cross the border into Pakistan. From there we continue riding north along the Karakoram Highway to China. We will then ride through Kyrgyzstan, Tajikistan, Uzbekistan and Turkmenistan to then cross Iran and finally reach Turkey.

Throughout the journey we hope to write a few pieces on how things unfold, the highs and lows of the road and also, a few great stories along the way! For now, we’d like to tell you a little bit about how this trip came into fruition and how to plan for a similar one yourself.

Lots of people we talk to about our trip ask the question, “How do you come up with the idea of going on an adventure like this?” The best answer we have is that this trip is the product of many of our previous smaller adventures. If you’re interested in the outdoors and this sort of trip appeals to you but you don’t know where to start, then start small. For us, we thoroughly enjoy hiking trips, overnight and week-long cycle tours and other outdoor pursuits. With this base to build on, it doesn’t really feel like we’ve been thrown in at the deep end. At least, not right in the deepest end.... Getting used to going out on smaller trips has worked well for us and that’s what we typically suggest when people ask us where to start.

See also: Laura and Ashley road the highest road in the world...on a tandem bike...on their honeymoon!

Time: the thing that we never seem to have enough of, is another obvious factor. Initially the idea of taking six months off to go on a trip like this seemed somewhat over indulgent. However, the more we thought and talked about it the more we were able to readjust our view. Rather than taking time out, or time away from the bigger picture; our career plans or progressions, the trip soon became ingrained in the big picture itself. We’ve been riding for just two weeks now, but the incredible life lessons and experiences to be gained from such an adventure are fast emerging. In short, everyone always has enough time, the difference is simply how you choose to spend it.

Choosing where to cycle

As always, location is key. We decided on starting in India for several factors specific to our tastes and interests. We thought about the things that appealed to us individually and collectively, such as diverse landscapes and cultures far different to those at home. Starting in India and heading west through central Asia seemed a great way of combining these. Five days of cycling had us reach Hampi, central Karnataka. Needless to say, the scenery was stunning!

We had a wealth of knowledge at our hands thanks to the formidable network of cycling tourists brought together by Warm Showers, a website designed to connect cycling tourists with potential hosts.

As hosts in Melbourne we had several fellow cycle tourists stay with us who provided us with tips on gear, routes and helped plant the seed, encouraging us to plan our very own adventure. One couple in particular had ridden a stretch of road through Tajikistan that we ourselves will cycle, which strongly grabbed our attention. If you’re planning a cycling adventure you should consider joining Warm Showers as soon as possible; we have learnt so much from hosting people and have already had three lovely experiences with hosts here in India. There’s nothing quite like a home cooked meal, a local’s insight, and yep, a warm shower to wash away the grime of the road.

The distance we will cover will be roughly 12,000 km, which was estimated by fellow cycle tourists to take around six months to complete. This would mean being comfortable covering around 50 Miles per day with a rest day every six days or so, which is what we’ve maintained so far. We both ride a lot back home, as our bikes are our primary form of transport. We lived around 10 Miles from Tim’s work and around 20 Miles from Het’s Uni, so didn’t feel the need to do any specific training prior to leaving.

That said, it has definitely taken two weeks to properly tune our cycling legs – and let’s just say there’s nothing that can really prepare you for sweat rash that will inevitably grace you with its presence early on in the saddle…. Thankfully India is filled with pharmacies and medicine stores, although it’s always an interesting task trying to mime that you have a rash on your bottom to someone with whom you don’t share a language….

Communication is the biggest barrier that we perhaps underestimated. As most of our riding has avoided the major highways thus far, it has meant that we have ridden through spectacularly remote corners of the country. In India, there are 122 different languages, with Hindi and Urdu being the two most prominent common languages. In the small rural villages there is often only one language spoken, so our paltry Hindi is even more useless than in the larger cities. We feel that being able to communicate with hosts, people we share food and chai with, would be a great respect to show and give us a greater insight into the lives of the people we meet, so we’ll endeavor to improve our vocabulary. On a smaller note, when you’ve just reached the top of a hill in 40 degree heat and 50% humidity it would be great to explain to the group of 20 interested passers by that you just need to catch your breath before you can answer their questions.

Our bikes are the topic of most questions we receive on the road: where are they from? How many gears do they have? And how much do they cost?

Before we left, these were all important questions for us to consider as well. Picking the right bike is kind of like picking the right size shoe if you’re a ballerina. It is completely integral to what you do, and there are so many decisions to be made. We won’t detail exactly how we decided which bikes were for us as there is so much information out there already, but so far the bikes have been superb steeds. One word of advice would be that you should try to have your bike sorted a month in advance so you can ride it as much as possible before leaving so that anything that needs adding, fixing or replacing is done at home where it is much easier to make adjustments. Crossing the state border to Goa, with rains lashing the forests of the Western Ghats.

Two weeks in: things have gone mostly smoothly and we have largely followed our roughly planned route that we made in Melbourne. Tim has suffered from some mild Delhi belly and the tropical rains have absolutely bucketed down on us for the last week. In truth, the rains have actually altered our plan a little, though we had thought that this might be a possibility right from the planning stage.

We reached Goa on the west coast of India, having ridden for four days in almost continual rain. At this time of the year, most of coastal India is blanketed by the monsoon. All of our belongings were starting to get wet and without a break from the rain it was difficult to stop them then going mouldy. Because of this, we decided to catch a train from Margao, Goa, to Mumbai to try and escape some of the weather.

Early on in our trip planning, we both agreed that catching trains and buses when necessary was ok and wouldn’t alter or spoil our trip intentions. Rather, it just becomes another mini adventure in and of itself. The reason we mention this is to illustrate the importance of having a degree of flexibility in your plans, particularly on a cycle tour where you are at the mercy of the elements.

We’ll write again soon with some details about the joys of camping in India and how to go about finding the best truck stop to sleep at. For now, it’s back in the saddle.