Absalon and Schurter: Olympic MTB race one final showdown for the greatest rivalry in pro cycling 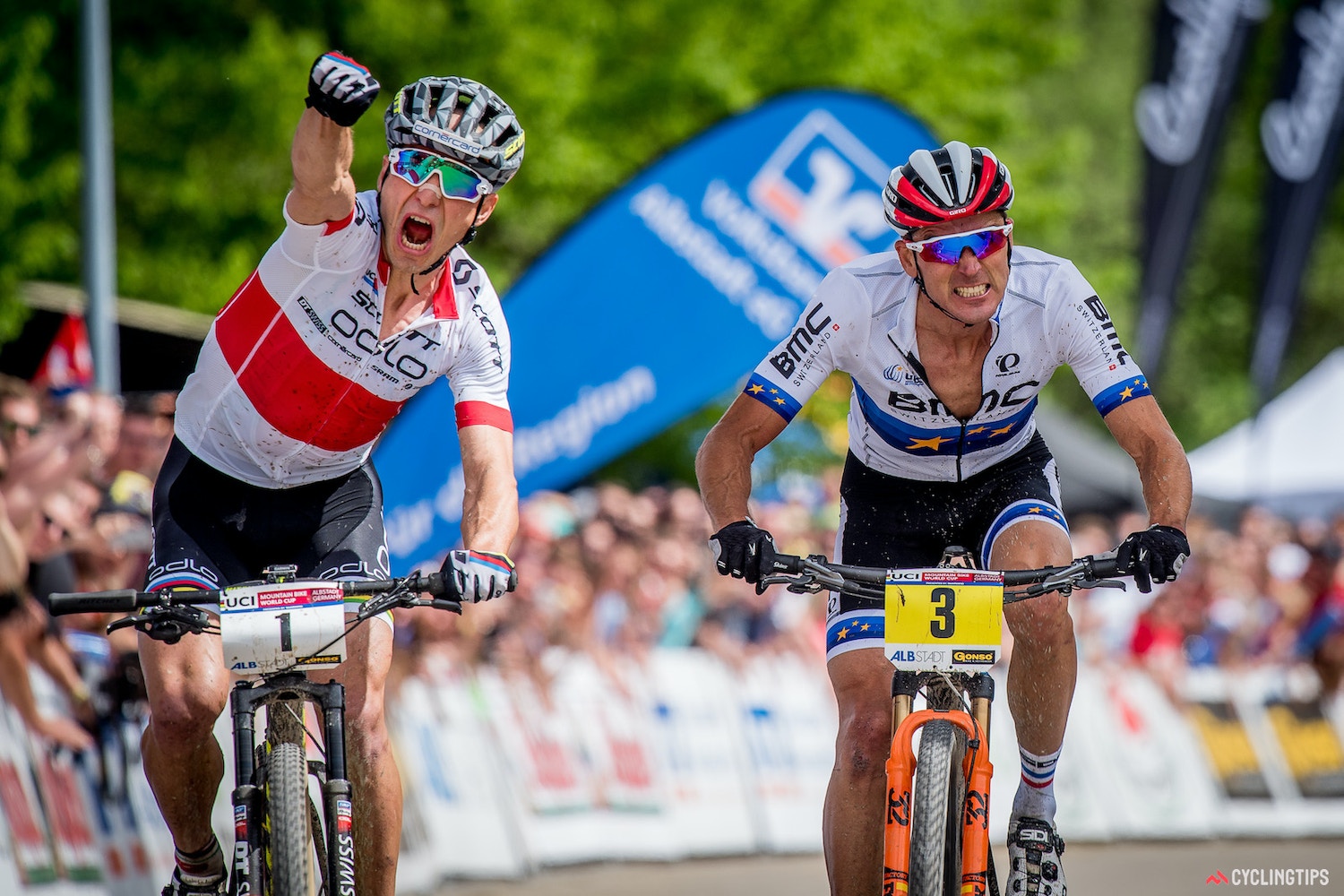 On Sunday morning in Rio de Janeiro, the final day of the 2016 Olympic Games, one of the greatest rivalries in the history of professional cycling will come to an end on the sport’s biggest stage.

While there will be 50 men on the start line — and yes, world road champion Peter Sagan (Slovakia) will be among them — all eyes will be on these two riders.

Absalon, 36, and Schurter, 30, are the Roger Federer and Novak Djokovic of cycling — the greatest of all time and the greatest of his generation, separated by six years with intersecting career arcs that have provided one of the most compelling rivalries in all of cycling.

Between them, Absalon and Schurter have held the title of world champion for 10 of the last 13 years. They’ve provided mountain-bike fans with countless great battles, oftentimes coming to the line together, or separated only by a handful of seconds. It’s a rivalry that has its own Facebook page. And like Federer and Djokovic, who are also separated in age by six years, what has made the rivalry between Absalon and Schurter so compelling is each rider’s ability to win on any given day.

Video: Onboard race footage from Julien Absalon’s bike, shot in October 2015, at the Olympic test event in Deodoro Pentathlon Park.

At 5-foot-11 and 150 pounds, Absalon is long and lean, an experienced veteran who keeps his cool and excels on steep, technical climbs. True to his French heritage, Absalon is assured and aloof, to the point of being a bit enigmatic. Name a top cross-country racer of the past 12 years — Meirhaeghe, Hermida, Sauser, Hesjedal, Martinez, Fontana, Stander, Peraud, Killeen — and Absalon has beaten him. And while it’s true that Absalon’s athletic peak was between 2004 and 2008, there’s no disputing his 2014 world title, his consecutive European Championship titles in 2015 and 2016, and his current UCI number-one ranking.

Much more compact, at 5-foot-8 and 150 pounds, Schurter is powerful and explosive, superior on descents, and a stronger sprinter. True to his Swiss heritage, Schurter is exact and precise. It’s not hyperbole to say that Schurter is perhaps the most all-around skilled cross-country racer the world has ever seen. On his best day, he has no equal.

If the 2008 Olympic race in Beijing was a successful day for both men — it was that performance that led Absalon to peg Schurter as his successor — the 2012 Olympics didn’t end well for either rider. Absalon punctured early at Hadleigh Farms, outside of London, and abandoned. Schurter rode a perfect race, only to be passed by Jaroslav Kulhavy (Czech Republic) on the inside of the penultimate chicane in the final 200 meters. The Swiss rider was despondent afterward, in tears.

At the 2016 world championship, held in July in Nové Mesto, Czech Republic — earlier than usual, due to the timing of the Olympics — Schurter was in a league of his own, riding a tactically perfect race to solo to victory ahead of Kulhavy, with Absalon in third, 30 seconds back.

Over the past 12 months, it’s not been often that Absalon has beaten Schurter. Absalon won the World Cup race in La Bresse, France, on May 29 with Schurter, who suffered two flat tires, finishing in fourth. A week earlier, in Albstadt, Germany, the two rode away from the field, with Schurter winning the sprint at the line.

Absalon leads the 2016 World Cup series with one event remaining; Schurter skipped the fifth round, at Mont-Sainte-Anne, to prepare for the Olympics. Absalon won in Mont-Sainte-Anne, his sixth career victory on the difficult Canadian course, and his 32nd career World Cup victory — a record that would seem unbeatable, if not for Schurter’s age and impeccable skill set.

“Rio is my last big goal,” Absalon announced last fall. “I will stop my career after this.”

Of course there are others who will fight for victory, most notably Kulhavy, the defending Olympic champion and 2011 world champion who came closest to Schurter at the world championship last month.

In fact, Absalon isn’t the only French podium threat — Maxime Marotte, 30, and Victor Koretzky, 22, can both ride at the front 0n their best day.

What’s most likely, however, is that Schurter will, finally, capture that elusive gold medal to complete his Olympic collection and confirm his status as the greatest of his era. Which riders can stay with him, and if Absalon will be among them, is the question that will be answered Sunday morning.

In October, Schurter won the test event held at the Deodoro Olympic Park, ahead of Marotte and Italy’s Andrea Tiberi. Absalon finished just off the podium that day, in fourth place.

“It’s a really cool course, and really fun to ride,” Schurter said last fall. “The challenge will be the heat. For us from Europe, it’s difficult to handle the hot conditions.”

Since then, Schurter has won three of five World Cup events, as well as the world championship. The forecast for Sunday is cool, with a high of 75°F (24°C) and a very high likelihood of rain.

“I’m in great shape right now,” Schurter said last month. “Up until now everything has gone according to plan towards Rio. The way this season is going has given me great confidence.”

Professional cycling has seen some great rivalries over the past decade, across all disciplines: Anna Meares and Victoria Pendleton on the velodrome; Tom Boonen and Fabian Cancellara across the cobblestones; Lance Armstrong and Jan Ullrich on the cols of France; and, in what may just be the best rivalry of the next decade, young cyclocross stars Mathieu van der Poel and Wout van Aert, in the Belgian mud.

But for the past decade, race after race, Absalon and Schurter have delivered the most compelling, evenly matched rivalry the sport can deliver. Cycling fans have been fortunate their careers overlapped, and the 2016 Olympic cross-country race could be the last, best, showdown of these two great champions.