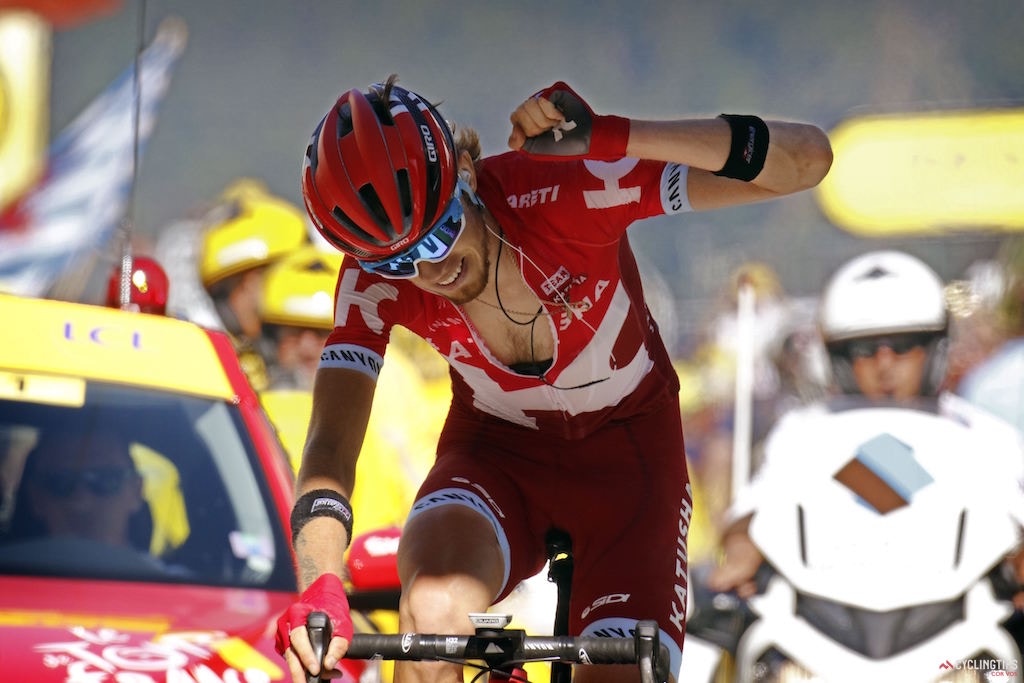 Russian Illnur Zakarin (Katusha) climbed his way to a mountaintop stage victory on Wednesday in stage 17 of the Tour de France, held entirely in Switzerland, as riders from the breakaway fought for victory on the hors categorie climb of the Col de la Gueulaz to the finish in Emosson.

Jarlinson Pantano (IAM) finished as runner up, 55 seconds behind, while KOM leader Rafal Majka (Tinkoff) came home in third, 1:26 back.

Majka and Pantano entered the final climb to the finish with a slim advantage over their fellow breakaway companions. Zakarin quickly bridged to the leading duo and then attacked them. The Russian powered over the final 6 kilometres of the stage to take the victory — a bit of redemption after he was forced out of the Giro d’Italia with a broken collarbone a few days before the finish, sitting fifth overall at the time.

“I did my best today,” Zakarin said after the stage. “I’m really happy now. Thank you to my teammates, they’ve been super. This result is not a surprise for me. In the first week, I also tried to go for it.

Australian Richie Porte (BMC Racing) attacked in the final two kilometres of the climb, and only Chris Froome (Team Sky) was able to follow. Nairo Quintana (Movistar), who entered the Tour as Froome’s biggest adversary for the overall, lost more time on the summit finish. The Colombian finished not only behind Froome, but also behind GC contenders Adam Yates (Orica-BikeExchange), Romain Bardet (Ag2r-La Mondiale), and Fabio Aru (Astana).

Dutch rider Bauke Mollema (Trek-Segafredo), who began the day sitting second overall, suffered in the final kilometres and finished behind Quintana on the stage.

However the biggest loser on the day was American Tejay van Garderen; the BMC rider saw any hop for a high overall finish wiped away, as he was dropped on the penultimate climb, finishing about 18 minutes behind the yellow jersey contenders.

Froome now leads Mollema by 2:27 with Yates in third, 2:53 behind. Quintana remains in fourth overall, but is now 3:27 back of Froome.

After the official start of the stage a crash occurred involving Borut Bozic (Cofidis), Warren Barguil (Giant-Alpecin), and Gorka Izagirre (Movistar). Izagirre was forced to abandon the race with a suspected broken collarbone.

The fight to get in the breakaway was highly aggressive, with no riders able to gain a stable advantage; the peloton covered 51.8 kilometres in the first hour of racing. After 70 kilometres of racing a breakaway of 11 riders formed and quickly built an advantage.

Majka took maximum KOM points over the Category 3 climbs of the Côte de Saanenmöser and Col des Mosses. At the top of the Col des Mosses with just under 80km left in the stage, the breakaway held a lead of over 11 minutes on the peloton. On the descent the breakaway group swelled to 14 riders as Voeckler, Van Avermaet, and Lutsenko made the junction to the leaders. The chase group had split apart on the Col de Mosses.

Shane Archbold (Bora-Argon 18) and Bozic crashed on the descent of the Col des Mosses. It was the second crash of the day for the latter, and he abandoned the race.

The finale of the stage kicked off with the Category 1 Col de la Forclaz (13km at 7.9%), which began with 31km remaining. The leading 14 riders held an advantage of nearly 13 minutes over the peloton, which was led by the black kits of Team Sky.

Gallopin was the first to attack out the breakaway and the Frenchman was soon joined by Lutsenko. A changing of the guard occurred on the front of the peloton with Movistar and Trek-Segafredo coming to the front to set the tempo on the climb.

The breakaway crested the climb as a group, albeit missing a few riders who had been dropped on the climb. Majka again took maximum KOM points, continuing to extend his lead in the King of the Mountains classification. On the descent Majka and Pantano opened a gap on their other breakaway companions and began powering towards the final climb of the day.

The duo were aware of each others capabilities, as Pantano out-sprinted Majka to win stage 15 on Sunday in Culoz.

Vincenzo Nibali (Astana) came to the front of the select group of GC favorites on the Forclaz, and his increase in tempo put van Garderen in difficulty.

On the lower slopes of the finishing climb, Zakarin accelerated away from the chase group in pursuit of the two leaders, quickly making the junction to the leading duo.

With 6.5km to go, Zakarin attacked and Pantano dug deep to follow the him. Majka had no response to the acceleration. The Katusha rider accelerated again and was able to dispatch Pantano. Meanwhile, the peloton hit the bottom of the climb more than 10 minutes behind the leaders, led by the light blue kits of Team Astana.

After Nibali, and then Diego Rosa, whittling down the group by setting a high tempo for Astana team leader Aru, Alejandro Valverde (Movistar) came to the front for Quintana.

Dan Martin (Etixx-QuickStep) was the first of the GC riders to attack, and soon Valverde was out the back of the group, as Sergio Henao (Team Sky) set the pace on the front. Henao reeled in Martin quickly, and just four kilometres remained in the stage for the group containing many of the GC contenders.

Zakarin took the stage victory for Katusha, the first Russian stage winner at the Tour since 2009. Pantano came home in second, more than a minute behind, with Majka in third. The Tinkoff rider gained considerable KOM points over the course of the stage and holds a hefty lead in the competition for the polka-dot jersey.

“After I crashed at the Giro with two days to go, I was very disappointed, but I quickly underwent a surgery,” Zakarin said. “I didn’t miss any time in my rehabilitation so I could stick to the plan to come to the Tour de France. During the first two weeks, I didn’t have any other goal but stay out of trouble and work for Alexander Kristoff. The goal was to win a stage in the third week, we’re very happy we made it. In the future I want to win a Grand Tour and the Tour de France has my priority. It’s the most important race of the year. We’ll analyze this season first and then determine which Grand Tour I should target to race for the overall win next year.”

With two kilometres to go for the GC group, and with Sky’s Wout Poels and Mikel Nieve escorting Froome up the climb, Porte attacked. The Tasmanian began the stage 4:27 down on Froome, and, initially, nobody followed him. Aru tried to bridge to the BMC Racing rider and Froome attacked over the top of him. Quintana was stuck to the Briton’s wheel, but soon there was daylight between the too.

Froome bridged to Porte, as they rode under the flamme rouge. Mollema was in difficulty and losing time to the riders sitting behind him. Quintana, Yates, Bardet, Louis Meintjes (Lampre-Merida), and Aru were chasing Froome and Porte.

Quintana was dropped from the chase group 450 metres from the finishing line after Yates went to the front of the group.

“I don’t think it was possible to go faster than Richie at the end,” Froome said. “I didn’t need to pull. Today was the only the first of a block of four difficult days in the mountains.”

The top positions in the GC did not change, but the time gaps to Froome grew, except for Porte, who is still 4:27 behind in sixth place. Second thru sixth place on the GC are only separated by two minutes, so the race for the podium is not over.

“We gave it a try, I think there’s no one who can say we didn’t,” Valverde said. “It’s become really difficult to achieve the win here, but we must keep fighting for the podium. Our plan with my acceleration was making it harder and harder, trying for Sky to have as few riders supporting Froome as possible, so a subsequent attack by Nairo would have to be responded by Froome himself. I pushed hard, with a couple of strong accelerations, and later set my own pace to try and lose as little time over the line as I could. Froome is much superior, you’ve got to admit it. We must remain focused, with good morale and battling until the end. Obviously, the Tour is not done until Paris on Sunday; should we have a chance to take the podium with Nairo, it’d be a nice goal to keep our minds set on.”

Yates again pulled on the white jersey of Best Young Rider after the stage and Sagan further extended his lead in the points classification by winning the intermediate sprint during the stage.

On Thursday the riders will tackle the second and final individual time trial of the 2016 Tour de France. The solo effort requires the riders to tackle a 17km route from Sallanches to Megève. The stage includes only 10 metres less of climbing than the first time trial, 650 metres (2,132ft), but is half the distance. The hilly profile will make it difficult for the time trial specialists to contend for victory and a shake-up on the GC is likely.