Dumoulin Charges Back Into Red 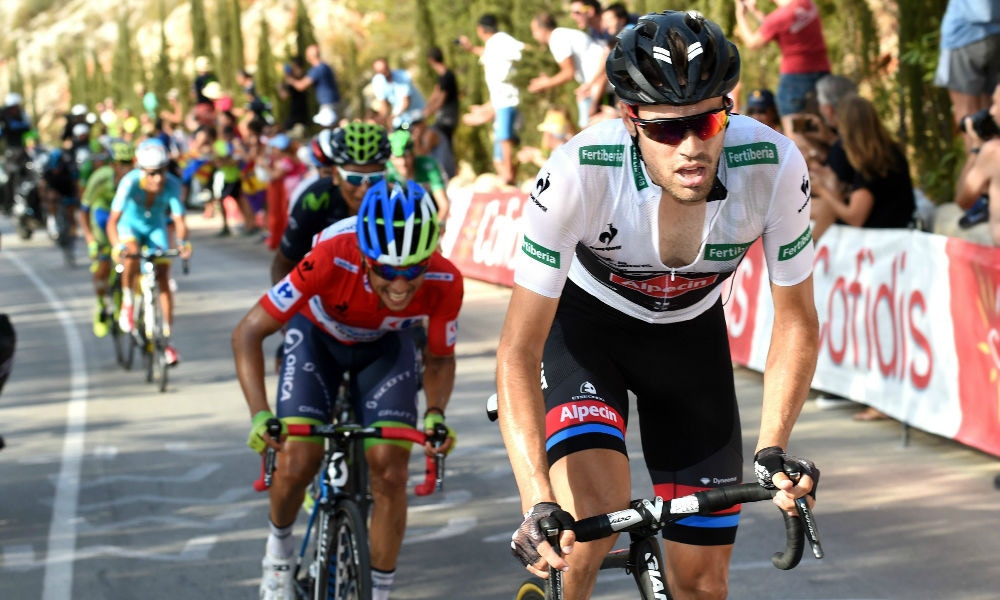 Stage 9 of the Vuelta was mostly flat, but punctuated by two steep climbs approaching the finish that saw Tom Dumoulin of Giant - Alpecin regain the leader's red jersey and take the huge scalp of Chris Froome.

Three big names were missing from the start line of stage 9 - Nacer Bouhanni of Cofidis Solutions Credits, Tejay van Garderen of BMC Racing Team, and Peter Sagan of Tinkoff - Saxo (who would still be fuming after being knocked off his bike by a neutral service motorbike on stage 8). There were 14 riders to break away early in the day, but they were given very little room by the peloton, which was controlled by Team Katusha.

Approaching the final climb, the peloton had closed in on what was left of the breakaway and the GC contenders started trading blows. The final ascent (with a gradient of 19%) saw Alejandro Valverde of Team Movistar attack first, clearly trying to set things up for Nairo Quintana.

A multitude of attacks followed, which softened up the elite group of riders at the front of the race. With 1.7km to go Dumoulin made the decisive break, dropping current leader Esteban Chaves of Orica-GreenEDGE, and putting everyone except Chris Froome of Team Sky, Joaquim Rodriguez of Team Katusha and Rafal Majka of Tinkoff - Saxo into difficulty.

With 500m to go Froome took control and looked the likely winner but Dumoulin was not to be denied, surging one last time to move ahead and take the stage victory. Chaves was turning himself inside out, but the efforts from the first week and multiple crashes took their toll. The diminutive Columbian finished almost a minute behind Dumoulin and relinquished his red jersey.

Dumoulin said after the stage, "I felt very good during the stage, unlike yesterday when I did not have the best day, so I wasn't really expecting it. But the stage worked out surprisingly well."

"My tactic for the final climb was to attack on the flatter part and hang on on the steeper part. I could never have imagined that I could win a stage like this, but I'm in the form of my life."