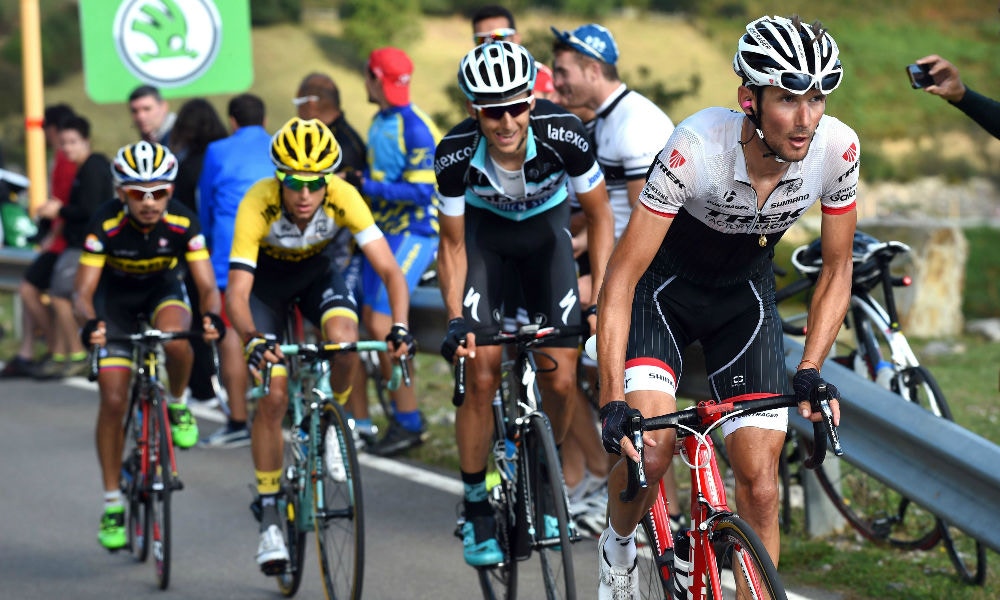 After stage 15 you couldn't have imagined the 2015 edition of the Vuelta a Espana getting any closer, but at the completion of stage 16, the race has done just that. Joaquim Rodriguez of Team Katusha has moved from second position and one second behind Fabio Aru of Pro Team Astana, to the overall lead, one second ahead of Aru.

The stage turned out to be two separate races. An early breakaway group of ten riders - containing Frank Schleck of Trek Factory Racing, Pierre Rolland of Team Europcar and polka dot jersey wearer Omar Fraile of Caja Rural Seguros RGA - extended their advantage to an astonishing 22 minutes. Pro Team Astana were happy for the breakaway to extend their advantage and finally it was Team Katusha who came forward and took over the pace making.

On Alto de la Cobertoria, the penultimate climb of the day, Schleck began to turn the heat up on the breakaway and one by one they dropped off the pace. The category 1 climb was 9.8km in length at an average gradient of 8.7% and at the top only Rodolfo Andres Torres of Team Columbia was still with Schleck.

These two would battle it out on the final climb of the day for the stage victory. The incredibly steep final climb saw the riders cover 6.8km at an average gradient of 11.1% regularly hitting gradients over 20% as the approached the summit. Schleck attacked with 3km to go and that was the race over.

Schleck said after his victory, “It’s been so long for me without a win. The whole day was long and hard, but I was on a good day. It’s all so fresh still to make big comments…I just know that I owed myself to do well, I worked so hard for this, I deserved it. “I have been fighting hard the last month, had some injuries, couldn't do the Tour and came here with a lot of confidence for the Vuelta, and it was tough to win this stage, but all the work, all the injuries – today was all worth it.”

Back in the main group and it was almost a carbon copy of yesterday. Rodriguez clearly enjoyed the steeper climbs of Spain, repeating yesterday's power, distancing Aru on the 20% sections. Aru fought to hang on to the red jersey but he couldn't match the punchy power of Purito and finished a heartbreaking two seconds behind Rodriguez, loosing his red jersey by one second!

Tom Dumoulin of Team Giant - Alpecin dug in and did all he could to minimize his losses, finishing 27 seconds behind Rodriguez. All his efforts will now go into the individual time trial on stage 17 to see if he can regain the lead.