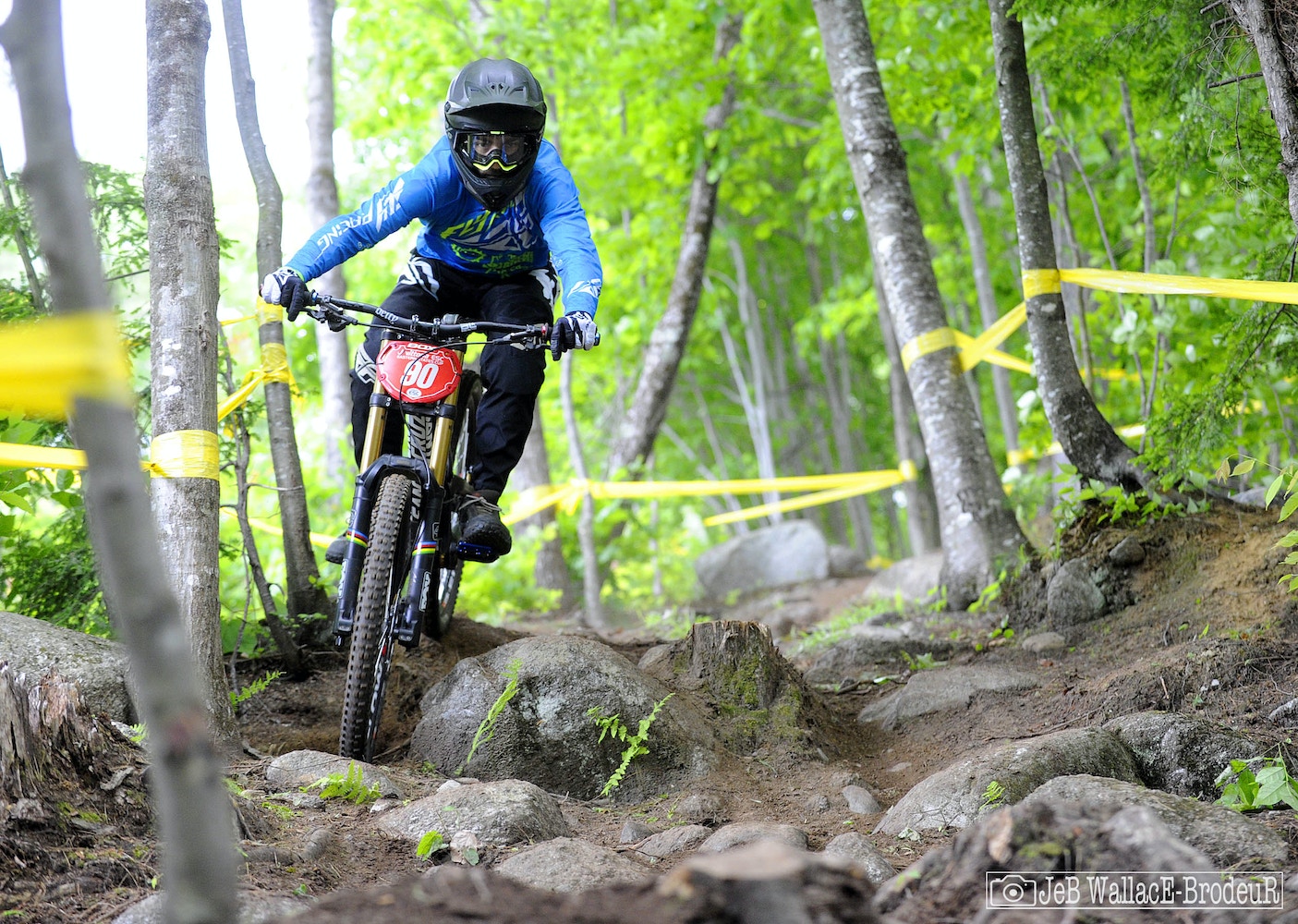 On the heels of its first-ever enduro-and-downhill-in-a-day race last weekend, the Vittoria Eastern States Cup had another first this weekend at its New England Downhill series kickoff at Pat’s Peak in Henniker, New Hampshire. For the first time, racers took two runs on two different downhill tracks with the best combined time the winner. In the past, the Pat’s Peak event has always had a unique best of two run format on a single track. The race dynamic was flipped on its head this year. Where before you got two shots at a perfect run, this year you get one shot at two perfect runs. Pat’s Peak has a modest vertical but offers a wealth of old school New England downhill terrain with tangles of roots and an unending supply rocks. For the most part, the rocks were weathered and rounded so the race wasn’t a flat-tire fest like last weekend at Blue Mountain but more a test of suspension and line choice. The top half of the two race courses were separate but they joined back into one track on the lower half of the mountain and shared a common finish. The first track resurrected the old downhill from a few years ago and took a longer line down the mountain. Though more circuitous, it offered the biggest features, including a hefty drop into a rock garden that caused problems for lots of racers and some challenging side hill sections. The second track was the one that racers have used for the past few years and took a relentlessly rocky line down the fall line with lots of technical turns through seas of baby heads. Pat’s Peak has made some big course upgrades since last season, including extending the bottom of the course and constructing a massive log bridge over the cross-country track. The women’s pro race was all about Lauren Daney who crushed the field by a 45-second margin. After taking second at the Mountain Creek ProGRT a few weeks ago, Daney, riding her new Patrol bike for the 110% Racing team, appears poised for a podium-filled season. Daney clearly enjoys the Pat’s Peak track as she took the event last season as well. The men’s field saw some tight racing and shuffling between runs at the top of the leader board. Alex McAndrew, racing for MadKats, threw down a huge first run and took a massive 5-second margin into the second run. Runner-up Isaac Allaire won the second run but was only able to pull back a couple seconds from McAndrew’s cushion. Brazilian Frederico Vieira continued his string of consistent results with a third-place, just over a quarter-second behind Allaire.