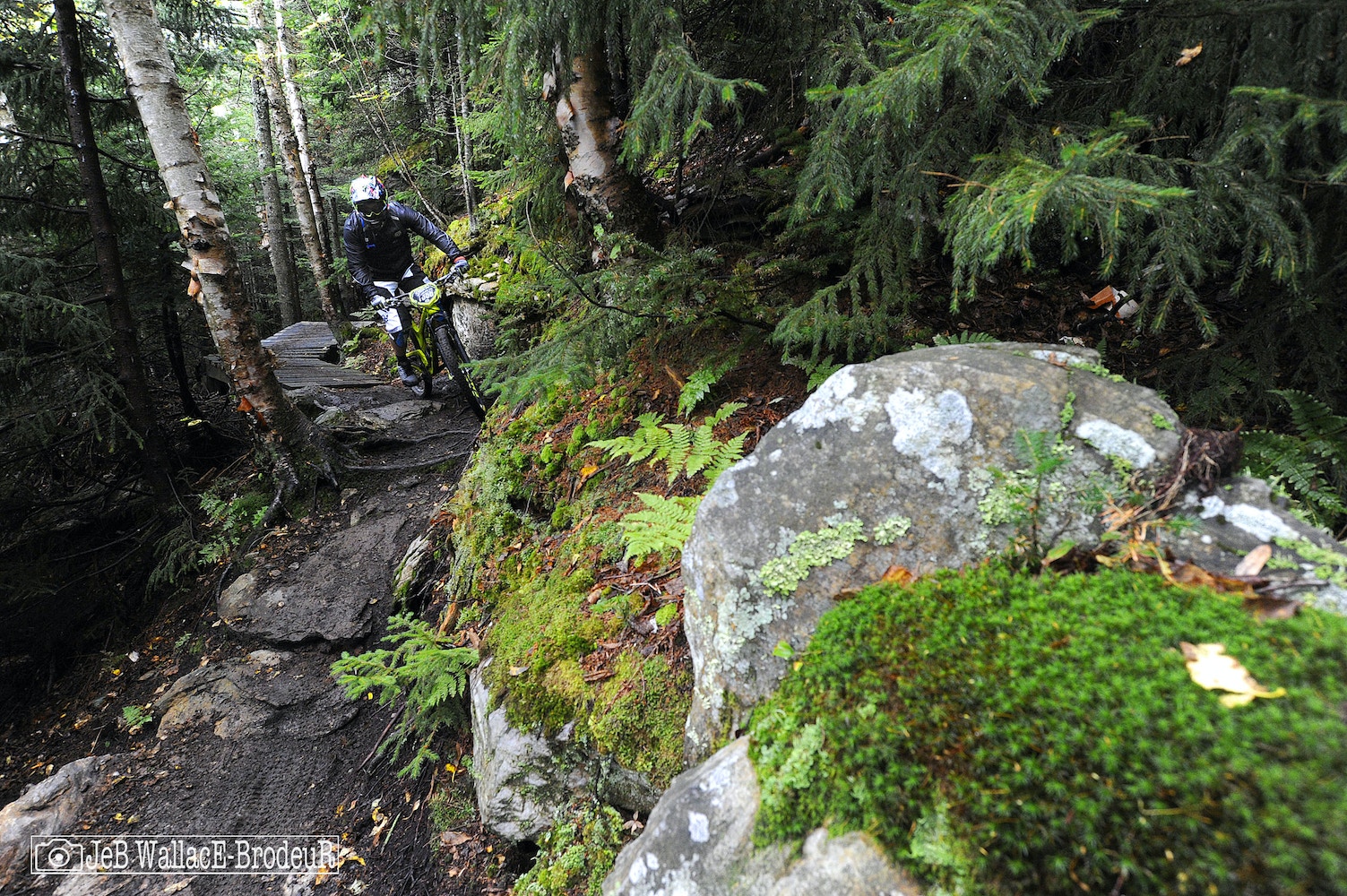 After five long months of racing, the Vittoria Eastern States Cup Enduro Series wrapped up its season this past weekend with a blowout at the Beast Of the East. The series, which swelled to ten events this year, returned to Killington Resort in Vermont for the final battle of the bikes. With double points on the line and overall titles in every class up for grabs a huge field of racers turned out for the last hurrah. Killington, considered by may to be the best enduro venue on the East coast, once again offered up the goods, with five long, varied and challenging stages. Stage One began high on the mountain and was the shortest stage of the day. It featured rocky, low-angled terrain punctuated by several short climbs. A climbing transfer linked the first two stages and was the site of the Fox DOSS Seatpost Climber’s Challenge. Stage Two was the longest of the day and took in some of Killington’s most legendary terrain such as the rollicking berms of Cable Trail, the damp, dark steeps of Yo Vinny, the slick slabs of lower Funny Bone and the rooty traverses of Gambler. Racers then took a long traverse across the mountain to the newly-built zone off the Rams Head Express Quad. Stage Three started with the woodsy traverses of the now defunct Outback trail and finished on the bottom half of Goat’s Skull, the site of the mountain’s first Pro GRT downhill race earlier this summer. Another trip up the Rams Head lift brought racers to Stage Four and a roller coaster ride down Sideshow Bob, one of the mountain’s new flow trails featuring endless berms and smooth rollers. A final trip up the gondola took riders to the top of Stage Five which began just below the peak. As is the tradition at Killington enduros, the final stage was the most challenging of the day and was highlighted by the double-diamond rock gardens of Scarecrow and a fresh-cut traverse that brought racers to the rock jumble at the bottom of the downhill race course. The women’s pro race drew a highly competitive group with the entire field separated by a matter of minutes. New Hampshire racer Dawn Bourque, who was racing downhill on the world stage way back in the early 90s, made her third Vittoria ESC start of the year and pulled out the win by a 43-second margin. Not surprisingly, Bourque earned most of her advantage on the gravity-oriented Stages Two and Five. In the runner-up spot was the Queen of East Coast enduro, Lauren Petersen. The reigning overall champion finished her 2016 season with a remarkable five wins and three second places. In third place was Amy Alton, who has found the podium numerous times this season in both enduro and downhill. Alton raced much of the day with a painful ankle and swollen elbow suffered in a crash on Stage Two. On the second step was Isaac Allaire, who won the Sugarbush enduro a few weeks ago. Allaire is one of a small group of Eastern racers that has won in both enduro and downhill disciplines. In third place was Jason Memmelaar, who was the picture of consistency this season, hitting the podium in all eight Vittoria ESC enduros that he raced.