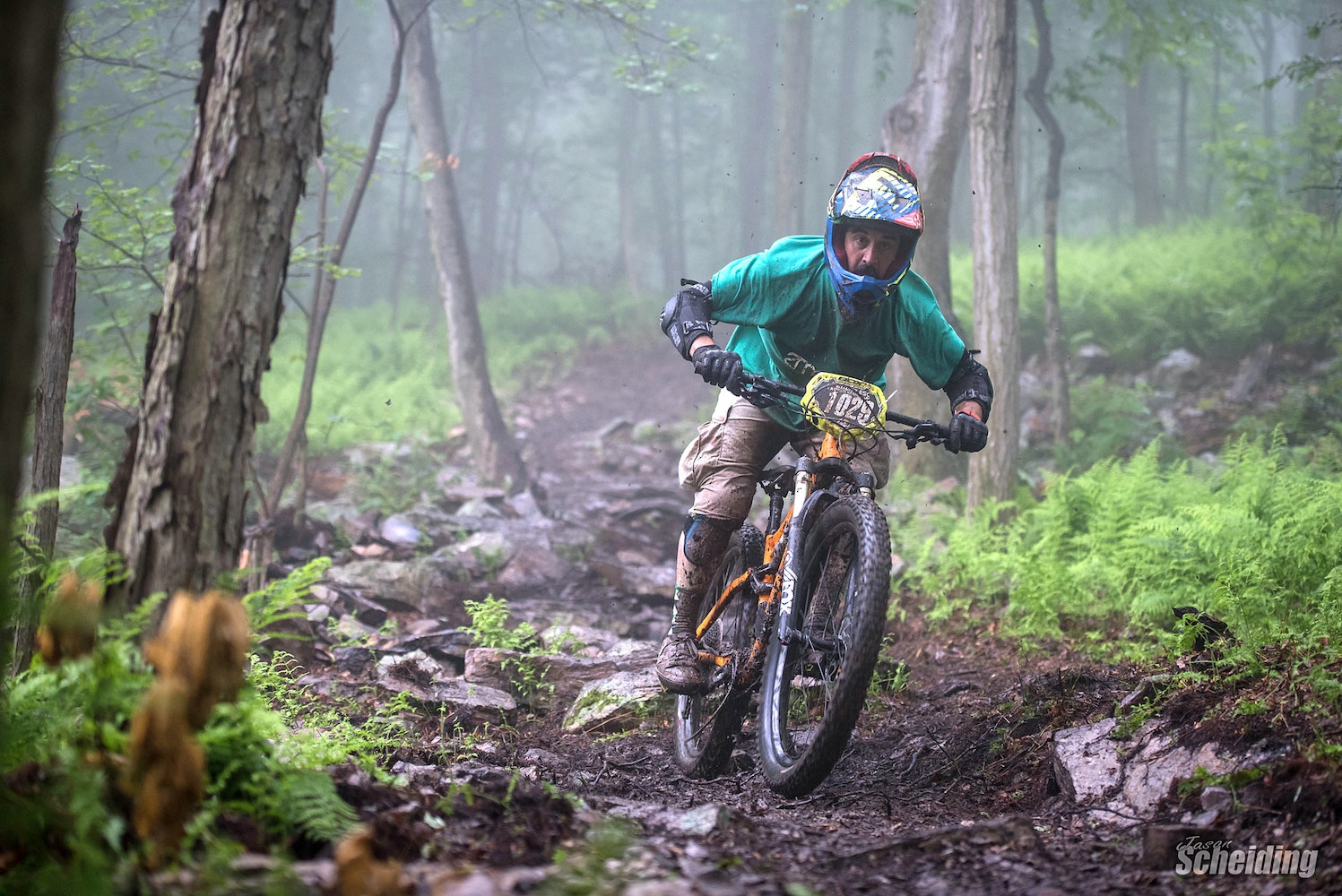 Blue Mountain Resort in the Poconos of Pennsylvania played host to a busy day of racing this past weekend. For the first time in Eastern States Cup history, an enduro and downhill were held on the same day. The event was the first of six Box Components East Coast Showdowns which bring the two disciplines together for an action-packed weekend of racing. The enduro was first to go in the morning. Riders participating in both events were able to get a jump on the field with an early start time. The Blue Mountain enduro course featured five segments that showcased all the mountain has to offer and ranged in length from two to three minutes on Stage 1 to well over 10 minutes on the final stage. The mens pro race featured some familiar faces on top of the podium. East Coast enduro master Seamus Powell once again showed why he is the man to beat on any given weekend. Powell, riding for the Giant Factory Off Road Racing team, won four of five stages and took the overall win by an impressive 37-second margin.

“The heavy precipitation held off for the race but it certainly was socked in and drizzling all day which I love! The conditions were definitely wet and slick but if you rode right you could find plenty of traction on the track. Stage 5 was by far the most physical stage for the race. The first four stages you could do just fine on a DH bike, so I'm happy that the race had Stage 5 with the fair bit of flat pedaling in it to keep everyone honest. Stage 4 was the steepest stage and most technically challenging of the race.” Powell lives the life of a biking nomad during race season. He drives a Subaru Impreza with 200,000 miles on it and his duffel bag is never unpacked. Trailing Powell was perennial speed machine Jason Memmelaar, racing for Yeti Cycles, who was coming off a solid top-twenty finish in the ProGRT downhill at Mountain Creek last weekend. Memmelaar won the first stage and was tied with Powell after the second but steadily lost ground on the final three.

“The tracks were greasy for practice on Saturday, the rocks were sweating. I flatted on my last practice run on Sunday, so I did an experiment and stuck three Dynaplugs in my tire and raced it all day! The day started out smooth, winning the first stage. But my head wasn't quite in it all weekend and I lost mental focus and crashed on Stage 4. Blue Mountain always puts on a good race.” Downhiller turned enduro racer Adam Morse took home the third spot racing for POC,Skida and Team Granite. Morse is most comfortable when gravity is calling the shots and lost over half a minute on the final cross country stage. Unfortunately, Morse went down hard doing some fun runs after the race and wasn’t available at the awards ceremony. The pro women’s race was a wide open affair with four different segment winners. Reigning enduro queen Lauren Petersen prevailed in the end to win her first race of the season. Petersen, racing for CFM Cycles, Intense and Honey Stinger, won Stages 1 and 2 was consistently fast in the others to pull away with a comfortable 32-second margin of victory.

“Tracks 1-4 were pretty much the same as last year but 5 was brand new and kicked your ass. It started with a super tough climb, went into super greasy rocks, and then ended on fire road. And in contrast to Victory Hill, the rain actually made the tracks better and I found way more grip in the rock gardens and corners during the race versus practice. Myself, Clarissa, Rachelle, and Kate had a fantastic time goofing around and cheering each other on through the mist and mud.”

Petersen leads a busy life off the race track. She’s a research scientist with a PhD in microbial genetics doing work on the gut microbiomes of athletes. She became interested in this field after battling Lyme Disease for ten years (from age 11-21). In only her second Vittoria ESC enduro start, Ontario native Sarah Lynch proved her third-place finish at Victory Hill was no fluke by taking the second spot at Blue Mountain. Riding for Two Wheel Racing, Lynch was running in third place until she absolutely crushed the final stage to move into the second spot.

“I was able to get to Blue Mountain early enough on Friday to get a run on each stage on Friday, which I think helped a lot! I have never ridden anywhere like Blue Mountain. Ontario just doesn't offer that kind of steep, rocky riding. But I absolutely loved it! It was actually also my first time ever using a chair lift with my bike, a full face helmet and any sort of body armour. Certainly my cross country experience helped a lot on Stage 5, which was a 12.5 minute stage that had climbing and a lot of pedaling. I really loved Blue Mountain as a venue though, it was an amazing place to ride, and the trails just flowed so well and really push your limits! I definitely will return to ride or to hopefully race the next ESC race.” In third place, matching her best Vittoria ESC result, Whistler transplant and Pinkbike editor Rachelle Boobar won the challenging Stage 4 and was in the top three in every stage but the last.

“It was great to be back at Blue Mountain for another year! I was really looking forward to Stage 4, as I loved the mixture of terrain on that track, from the the groomer berms and jumps to the nice technical section thrown into the middle. To take the win on that stage was really the highlight of my day and such an awesome surprise! Stage 5 was a real piece of work that I think sent most people red lining. I definitely struggled with the all out pedal fest but really enjoyed the technical middle section. All in all it was a great day out on the bike with a fantastic bunch of pro gals.” The downhill event took place after the enduro and followed a similar track to last year’s race with the addition of two new rock sections that added more challenge but did a number on tires and wheels all weekend. The Blue Mountain course is notoriously rocky up top before getting into some berms and high-speed jumps lower on the track. Though modest by New England standards, Blue Mountain offers the most vertical in Pennsylvania and packs a lot of terrain into that vertical. The women’s pro field was a small one and Mary Elges, racing for Bikeman, was able to best Amy Alton after racing to a sixth-place finish in the enduro.

“Once again we raced in mud and rain. Racing both events was definitely challenging. The enduro course was technical and challenging. Stage 5 decided the race. The distance you had to pedal played to riders with cross country fitness. I finished the enduro with little time to practice for the downhill. The downhill course played havoc on everyone’s tires but over all it was a fun course.” The mens pro field was headed by Yeti Cycles speedster Shawn Neer who is on a tear of late after hitting the podium at the ProGRT last weekend.

“Being my first time to Blue Mountain, I didn't know what to expect. Turned out to be one of my favorite tracks I've ridden thus far this year. Had a great mixture of natural rocky bits into well built berms that kept great flow down the mountain. We got a decent amount of precipitation Saturday night and throughout the day Sunday. Fortunately the track took it well and made the course better in my opinion. The rocks are sharp and relentless at Blue Mountain, so many flat tires this weekend!” Less than a second off Neer’s time was veteran pro Mauricio Estrada, racing for IJ Racing and Intense Cycles. Estrada has had good results at Blue Mountain in the past and this year was no different.

“The track was the same as last year but with some cool changes: two new rock sections that were destroying tires and wheels but made the track more challenging. The rain also made it really slick and foggy. The visibility was tough but I did a smooth run and I'm happy.” In third place was Frederico Vieira. In only his third Vittoria ESC start, Vieira, racing for aCOS, Move and Royal, is rapidly moving up the results ladder.