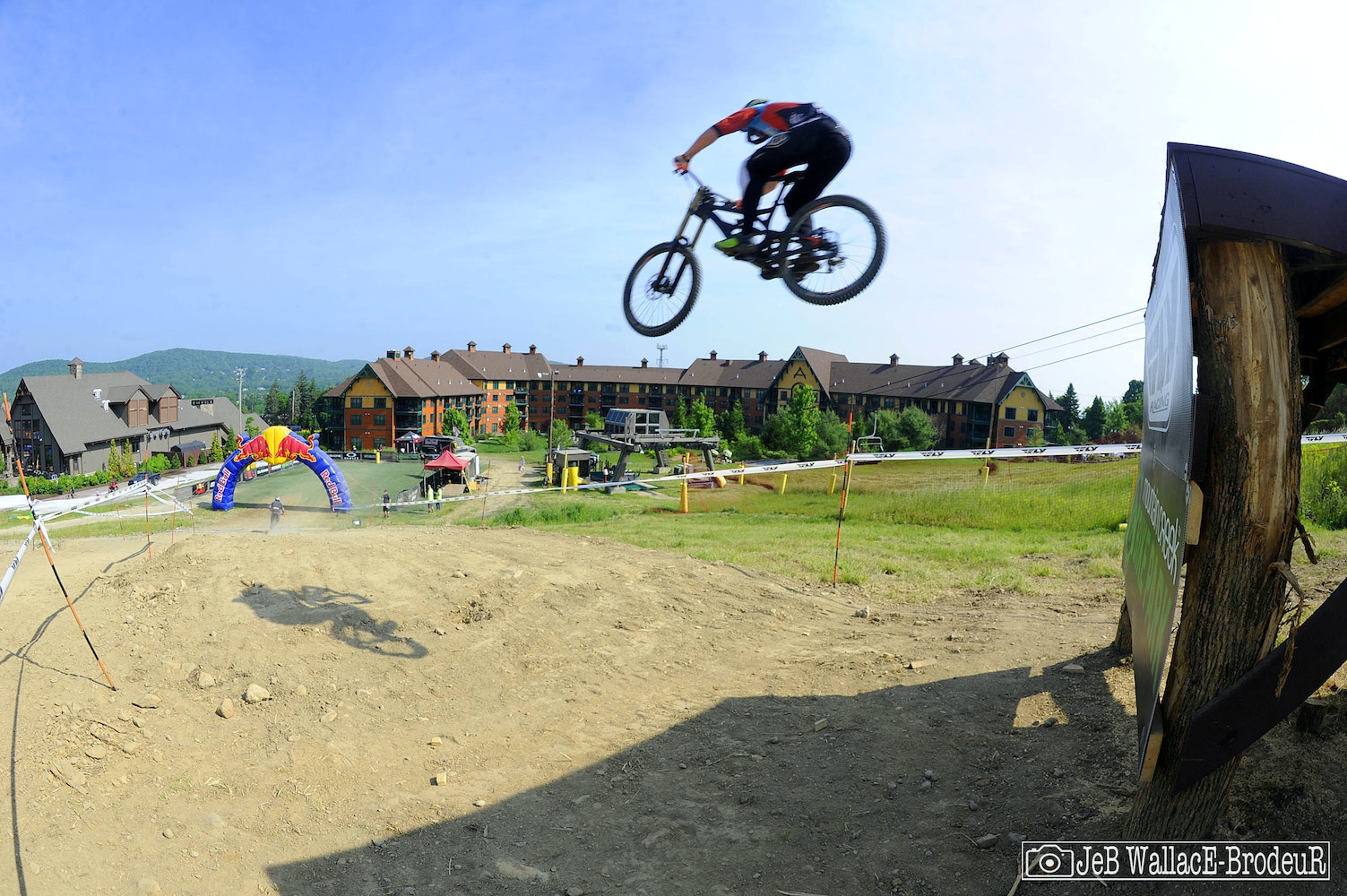 With temperatures approaching 90 degrees, the 2016 Spring Classic at Mountain Creek felt more like the Mid-summer Classic this past weekend in the bucolic northern hills of New Jersey. The second stop of both the Pro GRT and the Vittoria Eastern States Cup Atlantic downhill series saw hundreds of local and national racers gather to battle it out in the heat and dust. The event attracted both the world’s top-ranked downhiller and enduro rider, but the anticipated Gwin versus Rude match-up on race day never materialized as Rude wasn’t able to get much practice in and sat out the finals on Sunday. Mountain Creek packs a wallop despite its modest vertical. Its notoriously rocky flanks took their toll on bodies and equipment all weekend. The EMTs and bike mechanics were in high demand as they dealt with injuries and mechanicals of every description. Many of the top juniors in the country were in attendance, with a solid showing from West coast riders. Californian Sean Bell, riding for Santa Cruz Bicycles, took the win by a convincing 2.44-second margin. For the pro men, two-time defending champion Aaron Gwin, riding for the YT Mob, was able to hold off his closest rivals. Currently second in the World Cup rankings, Gwin clearly enjoys the Mountain Creek track as he now has a three-year win streak at the Spring Classic. Gwin’s closest rival in both the seeding run and the finals was North Carolina native Luca Shaw, riding for SRAM and Troy Lee Designs. Shaw was second to Gwin last year as well but was able to close the gap from over three second in 2015 to under a second this year. Shaw is clearly on his game with consecutive top-25 results at World Cups this season. In third place was Mitch Ropelato, who also took third in 2014 at the Mountain Creek ProGRT. Riding for SRAM, Troy Lee and Santa Cruz, Ropelato is off to a hot start on the national circuit this season after nabbing the runner-up spot at Port Angeles a few weeks ago. The pro women’s race was mostly a race for second as Jill Kintner crushed the field by a whopping 15-second margin. The reigning national champion won last year’s event by a nearly identical margin and is two for two in ProGRTs this season. In a case of deja vu, Lauren Daney was on the short end of the 15-second margin for a second straight year. Daney has not had a busy race schedule the past couple of years but continues to churn out out top results whenever she does get between the tape. In the third spot was Angelina Palermo, just three seconds off Daney’s time. Palermo is a relative newcomer to DH racing with only a handful of pro results under her belt. She is clearly one to watch in the future.