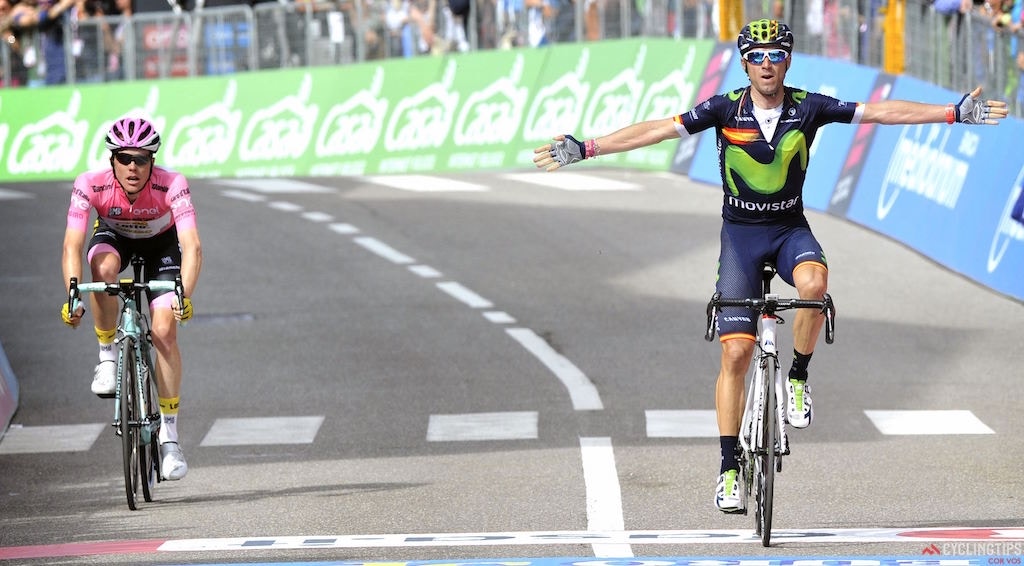 There were significant winners and losers on Tuesday’s Stage 16 of the Giro d’Italia, and none more so than Movistar’s Alejandro Valverde, who took his first career Giro stage win and advanced into third overall behind race leader Steven Kruijswijk (LottoNL-Jumbo).

Katusha’s Ilnur Zakarin finished the mountainous stage at Brixen-Andalo along with Valverde and Kruijswijk, losing a few seconds at the line but moving into fifth overall.

“It’s a good day for me as I move up in the overall ranking, although I wanted a stage win as a gift for the mechanics, soigneurs, directors, my family… all the people who have helped me overcome the day I had on Saturday because of the altitude,” Valverde said after the stage."

Behind Valverde, however, several of the race’s GC contenders suffered — most notably Vincenzo Nibali (Astana) and Esteban Chaves (Orica-GreenEdge). Chaves, who sits second overall, was not at his best coming out of the Giro’s final rest day and lost 42 seconds to Valverde and Kruijswijk, while Nibali lost 1:47 and is now in danger of being bumped off the final GC podium at a Giro he’d once hoped to win.

“We wanted to break the race up today,” Valverde said. “It’s a great feeling to win for the first time at the Giro.” And though he couldn’t out-sprint Valverde for the stage win, Kruikswijk had reason to celebrate, as he extended his lead in the general classification over all of his rivals except for Valverde and Zakarin.

The Dutch rider now leads the Giro by three minutes over Chaves.

“Second yet again,” Kruijswijk said. “I wanted to give my team a win but it’s an ideal situation for the Maglia Rosa as I’m now three minutes ahead of Chaves and the others. I was feeling really good, so I had to make the best of this short but really hard stage. I had to follow Nibali when he attacked early in the stage. I didn’t expect so much action the day after the rest day.”

Bob Jungels (Etixx-QuickStep) showed his class, by finishing in the second group on the stage and retaining his lead in the best young rider classification. The Luxembourger moved up to seventh overall, but is a distant 7:37 behind Kruijswijk.

The 16th stage of the 2016 Giro d’Italia, from Bressanone Brixen to Andalo appeared to be straightforward on paper with only two category 2 climbs, before a short category 3 climb to the finish. At just 132 kilometers and rated only three out of five stars by the organization, it didn’t seem to be a major day in the general classification.

That was not the case however.

An intensely fast opening hour of racing ensued as the peloton traveled gradually downhill to the base of the Passo della Mendola, covering an astounding 54 kilometers. A breakaway of nine riders was able to slip off the front of the peloton, but they never gained much of an advantage due to the high pace.

Beginning the Mendola, the bunch was all together and the attacks came nonstop up the climb, as the peloton shrunk quickly, eliminating the sprinters and tired domestics.

With about 75 kilometers to go to the finish, and seven kilometers from the top of the Mendola, a breakaway finally gained traction.

For reasons that were unclear, Zakarin dropped off the breakaway and rejoined the peloton, as Jungels and Sergey Firsanov (Gazprom-RusVelo) made the junction to the leaders.

Valverde and Nibali continued to launch moves off the front of the peloton, but they seemed half-hearted, mainly to test how Kruijswijk was feeling.

The answer? Kruijswijk was feeling good. The Maglia Rosa followed the attacks with apparent ease and confidence.

American Joe Dombrowski (Cannondale) set off alone to get to the leaders as the gap hovered around the half-minute mark. He would make the junction about a kilometer from the top of the climb, as Nibali set off a firecracker in the now very select group of favorites.

Zakarin, Kruijswijk and Valverde were the only riders to follow Nibali’s attack; Chaves was notably absent from the head of affairs.

The top of the climb saw the Nibali group 21 seconds behind the leaders and on the descent the two groups would come together.

“We started the first climb very fast, there were a lot of attacks to go in the break,” Zakarin said. “Finally, a group of six went away. Later, closer to the top, Nibali attacked with Valverde and Kruijswijk, and I followed them. We caught the front break and continued to work on the descent.”

Orica-GreenEdge took up the chasing in the peloton and kept the gap to the leaders pegged at 30 seconds, while Cannondale sat behind, not assisting in the chase, preferring to wait and see what happened with Dombrowski

The scenario would backfire for Cannondale, however, as Dombrowski was popped off the break on a brief downhill as the riders headed toward the next climb of the day, the Fai della Paganella.

Dombrowski appeared to curse into his radio after he was gapped, while Cannondale immediately began assisting in the pace-making back in the chase group. The final climb came in two parts, the first leading to Fai della Paganella (a categorised climb), and the second running all the way up to the finish in Andalo. The Fai della Paganella began with only 20 kilometers to race and the gap from the leaders to the chasing group with the other general classification contenders still stood at 30 seconds.

Chaves immediately leapt out of the group, showing his face for the first time all day in a desperate attempt to bridge to the leaders. He was followed by the Cannondale duo of Rigoberto Uran and Davide Formolo, Domenico Pozzovivo (Ag2r La Mondiale) and Rafal Majka (Tinkoff).

The Cannondale riders would drop off quickly however, with Uran ultimately losing over five minutes on the day.

Kangert, who had been doing much of the work in the lead group, dropped off his job done for the day and nearly came to a standstill on the climb, exhausted from the effort.

The lead group was quickly whittled down to an elite group with Zakarin, Valverde, Kruijswijk, and Nibali all watching each other.

About five kilometers from the summit, Valverde put in a strong attack, but was quickly marked by Kruijswijk with Nibali slow to react. Zakarin flew by all of them with a viscous acceleration and only the Maglia Rosa and former Spanish national champion could follow.

Meanwhile, Chaves was still attempting to bridge, but was locked in at 20 seconds behind, as his chase group swelled, picking up the remnants of the Maglia Rosa breakaway group.

As the Fai della Paganella kicked up to 15% inside the final kilometer to the summit, the leading trio stayed together, but alarm bells were ringing in the chase group. Nibali had been dropped and the Italian champion did not look good. The final kilometers flew by with a wideopen descent and the final category 3 climb doing little to slow the riders. Zakarin powered along with Valverde and Kruijswijk in tow, with the Russian having the most to gain on the general classification.

Valverde opened the sprint and as the road twisted and curved in the final couple hundred meters he was able to open a gap and take his first ever stage win at the Giro d’Italian.

“I came to the Giro with two goals — to win a stage and to finish on the podium,” Valverde said. “Half of the mission is now accomplished and I’ve moved into the top three for now, although I’m aware that Nibali, who is a born attacker, will try and knock me off the podium. From what we’ve seen today, Kruijswijk is the strongest and I believe he’ll be the champion at the end of the race. However, my first victory at the Giro is a great emotion. I am really enjoying this race.”

“On the second climb I felt pretty good, so I tried to attack and finally three of us went,” Zakarin said. “I knew I could gain some time today and I did my best on both climbs, especially in the final. I did all I could. I was able to get time and to move up in GC.”

Ulissi lead the chase group across the line over a half minute down on the winner. Chaves lost contact with the chase group in the run-in to the finish and finished 42 seconds behind Valverde. Nibali finished alongside fellow Italian Pozzovivo, but dropped down to fourth overall with Valverde now on the virtual podium in third.

The final week of the Giro has only just begun, but there continues to be substantial movement in the general classification.

One thing is certain though, Kruijswijk is increasingly appearing to be in control, and will be tough to dethrone in the coming days.

“It may have looked like I was in control, but there were a lot of attacks in the first part of the race,” Kruijswijk said. “I reacted rapidly to the attacks from Nibali, Zakurin, and Valverde. I was always in a good position. With ten riders at the front, it was an ideal situation for me. It was a short stage and maybe not the race of my life. Although, to keep my leadership this week, I think I’ll have to ride all the stages as if they were the race of my life.”