Sagan is the Boss 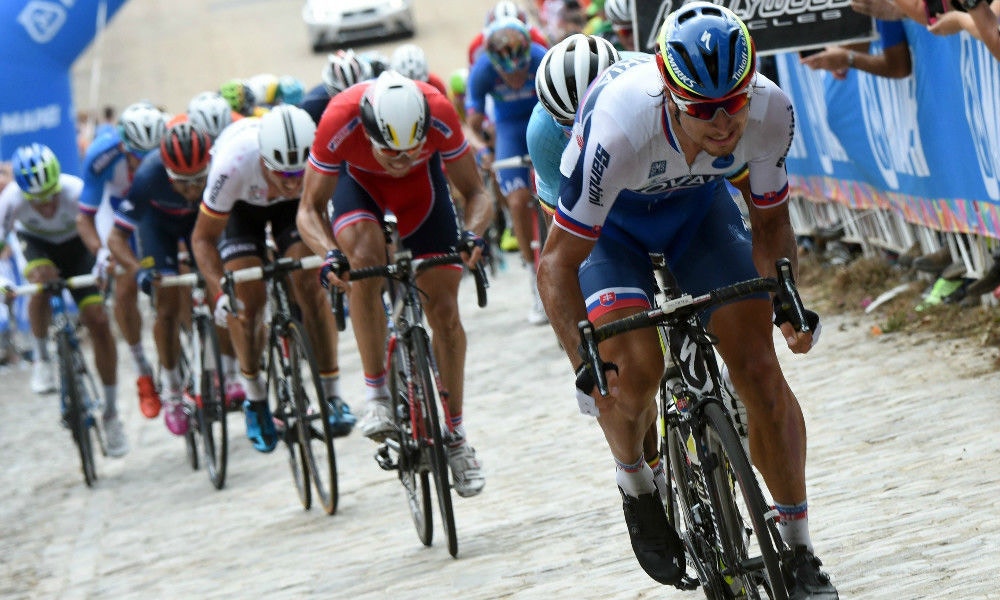 So often the bridesmaid but never the bride, Slovakian Peter Sagan has capped off the biggest win of his career and answered critics in the best way possible, to take out the 2015 UCI Elite Men's Road World Championships.

Sagan launched a withering attack on the final climb of the day (20% gradient over cobbles if you don't mind!), and had the strength to hold off a charging peloton.

The popular winner had this to say following his monumental victory:

"Today I was just waiting and waiting. I had my brother with me and my teammates were always with me. If something happened they were always there. It was a little bit crazy during the last laps, and I thought everyone had to be tired. I gave everything on last cobblestone climb and then it was full gas until the finish.

"I knew that if the group caught me, I was very tired for the sprint but it was the right attack for me. I saw also a lot of comments from people that I am not good for a long race like this. But now I have this jersey and I’ll keep it for a full year."

See also: See how close our pre-race predictions were

Racing on home soil the Americans flew the flag with breakaway attempts from Ben King and Taylor Phinney during the 261km race, but all of them were brought back as quickly as they began. The race was kept tight and despite the steep climbs and cobbled sections the peloton was at one with 36km remaining.

More riders tried to go off the front but the size of the peloton nullified every attack. Bauke Mollema, Tom Boonen, Michal Kwiatkowski and Ian Stannard were among the big names to try and break away.

With one lap to go another American Tyler Farrah got a small gap along with Belarusian Kanstantsin Siutsou, but by the time the peloton was on the penultimate climb they were back together. Czech Zdenek Stybar took his opportunity on Libby Hill, putting out tremendous power in an attempt to force a selection, but his move only served to bring the best riders to the front - John Degenkolb, Philippe Gilbert, Edvald Boasson, Sagan and Michael Matthews all within striking distance. The race looked like it was heading for a bunch sprint until Sagan emerged on the final climb, racing up the 20% cobbled 23rd street on the drops with no regard for the pain in his legs.

Sagan then extended his lead on the short descent and buried himself to stay away in the final kilometer. The pain was evident on the Slovakian's face but he went deep within himself and held on by three seconds for the win.

Australia's Matthews was able to out kick what was left of the peloton to finish second with Lithuania's Ramunas Navardauskas rounding out the podium.

The win is undoubtedly the biggest of Sagan's career and now means he will wear the iconic rainbow jersey until the 2016 UCI Road World Championships in Qatar. Thanks as always to Graham Watson for his winning shot.