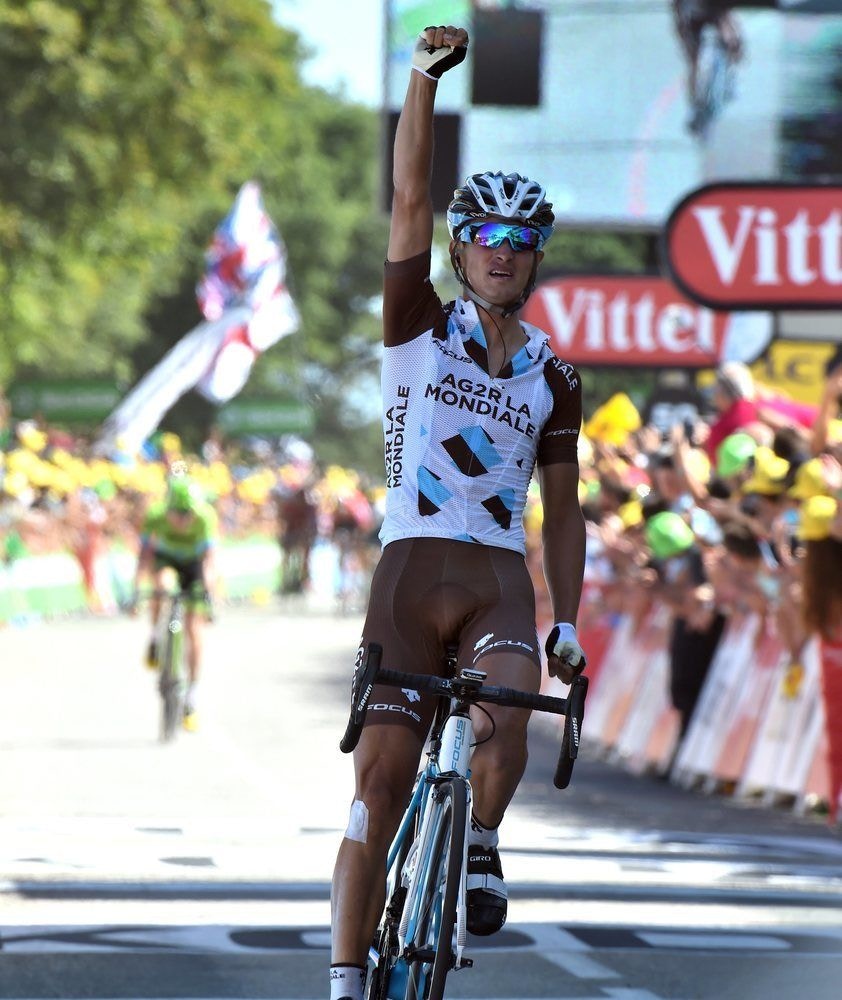 The drama continues in the 2015 Tour de France as another GC contender's campaign appears to be diminishing. Nibali is the latest rider to show signs of weakness, getting dropped on the final climb and casting doubts on his yellow jersey aspirations.

Back in 2011, the stage finish up the Mur de Bretagne produced a classic. Cadel Evans won by a tire width over Alberto Contador, but among the challengers on that day were also Gilbert, Schleck, Hushovd, Uran, Vinokourov and Sanchez to name a few. A real mix of classic style riders and GC contenders, which made the finish today a mouth watering proposition.

The pace of the peloton was very high to begin with which halted several breakaway attempts. Eventually four riders got away including, Sylvain Chavanel of IAM Cycling, Romain Sicard of Team Europcar, Bartosz Huzarski of Bora - Argon18 and Pierre-Luc Perichon of Bretagne-Seche Environnement.

Thomas De Gendt from Lotto Soudal was again on the front of the peloton keeping the breakaway in check. This follows his efforts yesterday where he controlled the whole race for close to 31 miles. Lotto Soudal signalled their intentions to try and get a good result for Tony Gallopin, who sat in fourth position overall going into the stage. De Gendt never allowed the breakaway's advantage to extend beyond reach, comfortably holding at 3 minutes.

The breakaway approached the Col du Mont Bel-Air with one KOM point up for grabs. The group kept a steady pace and Team Europcar rider Romain Sicard was allowed to cross first, although given the mass of spectators on the climb, none of the other breakaway riders would have been able to go around if they'd wanted.

The intermediate sprint followed shortly after, this time Huzarski and Perichon both contesting. The local Bretagne rider Perichon, followed the early attack of Huzarski and got the better of him crossing for first place. Back in the peloton the usual suspects lined up for the remaining points, but given the uphill nature of the sprint, a lot of them felt the sting in the legs and did not contest. It was left to Giant - Alpecin to lead out John Degenkolb, with Greipel tight on his wheel. The Gorilla continuing his hot form beating Degenkolb and extending his lead in the green jersey competition. The sprinters could feel a bit hard done by the 'sprint' point, Greipel maxing out at 33kph, which suggests it was more of a climb than a full gas dash.

Shortly after the intermediate sprint was over the breakaway group were caught, leading to a counter move initiated by Pierre Rolland of Team Europcar, and followed by a very large opportunistic group. 17 riders were now at the front of the race and Cannondale - Garmin and Team Sky were left in the peloton to reel them in.

Three riders tried to go clear from the large breakaway, Lars Bak of Lotto Soudal, Michal Golas of Etixx - Quick Step and Bartosz Huzarski of Bora - Argon18 who was in the days first breakaway. These three sensed that the group was too large and would not last. They quickly opened up a gap of 40 seconds over the peloton and got out to as much as 1:15.

Cannondale - Garmin took over the chase and were stretching the field in pursuit of the breakaway. The conservative racing over the last two days was gone, the peloton sitting on 30 mph and shelling riders off the back.

With 12.5 miles to go Cannondale - Garmin were still on the front and had reduced the breakaways advantage to 30 seconds. Amazingly though, with 9.5 miles to go the breakaway had extended their lead back out to 35 seconds, the trio riding extremely well and clearly not going down without a fight.

With 7.5 miles from the finish the power had gone out of Cannondale - Garmin's chase, but there was no shortage of teams coming forward to take over. Lotto Soudal and Tinkoff - Saxo both moving forward and immediately cutting into the breakaway's advantage.

The breakaway was reeled in at the 5 mile mark and it was then BMC Racing Team who took control, the previous yellow jersey wearer Rohan Dennis drilling it on the front.

The final 3.8 miles consisted of a descent, left hairpin turn and a slight rise before the final 1.25 mile climb up the Mur de Bretagne at an average gradient of 6.9%

Riders were all over the road with 1.9 miles to go, so many teams trying to control the front but having no chance. Team Sky took over just before the sharp right hand turn before the climb, Froome sitting in a great position.

With 4600 ft left on the climb Geraint Thomas came to the front to pace Froome up the climb. Just as he did Simon Yates attacked and gapped the field. AG2R rider Alexis Vuillermoz and Simon Geschke of Giant - Alpecin went with him, and it was up to Froome to close them down. He slowly began to bridge across taking Joaquim Rodriguez of Team Katusha and Sagan with him.

With 2700 ft to go Froome had closed the three riders down and was driving what was left of the peloton. At this point it all became too much for Vincenzo Nibali of Astana Pro Team who blew with 2400ft to go.

The decisive move came from Vuillermoz with 2000ft to go, countering Froome's move and going clear. Dan Martin of Cannondale - Garmin tried to follow him, but didn't quite have the legs. He was able to distance himself from all the other riders, but didn't have enough to close down Vuillermoz.

The young Frenchman went on to stage a huge victory, upsetting some big names. Peter Sagan again proved what an outstanding bike rider he is, finishing with the front group and taking over the green jersey competition to go along with his white jersey for best young rider.

As always - a big thanks to Graham Watson for his Stage 8 victory image.