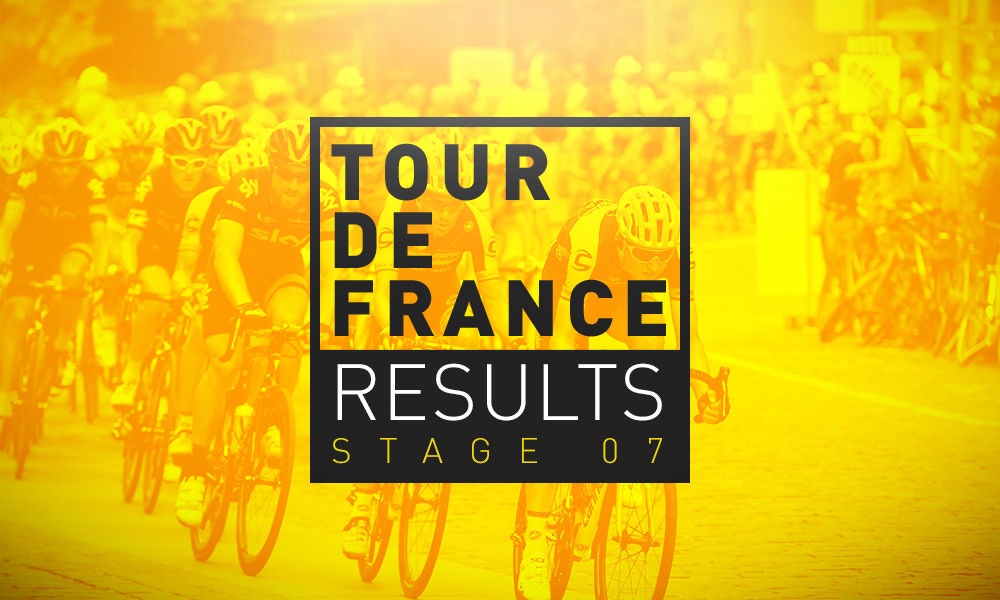 It was an emotional day for Etixx - Quick Step yesterday, winning the stage but losing the yellow jersey. Today the team responded in the best possible way. Mark Cavendish who has been frustrated and unlucky so far this tour, timed his run to perfection, winning the stage for his mate Tony Martin and notching up his 26th Tour de France stage victory.

The tour so far has a pretty extensive casualty list which only grew overnight. As expected race leader Tony Martin of Etixx - Quick Step suffered a broken collarbone and didn't start the stage. The president of the commissaries panel announced prior to the start that there would be no yellow jersey in the bunch as there is no leader. A sign of respect for the jersey and Martin. Greg Henderson of Lotto Soudal is another one to abandon overnight, two cracked ribs proving too much for the Kiwi sprinter to overcome.

Most of the action happened early in today's stage with the KOM and Sprint competitions taking place within the first 44 miles.

Daniel Teklehaimanot, MTB-Qhubeka p/b Samsung had the polka dot jersey going into today's stage and was keen to hold onto it for another day. He along with four other riders, Luis Angel Mate of Cofidis Solutions Credits, Kristijan Durasek of Lampre - Merida and Brice Feilu and Anthony Delaplace both from Bretagne-Seche Environnement, made up the breakaway. 7.5 miles into the stage and Teklehaimanot had ticked off his goal for the day, cresting the Cote de Canapville first and securing the jersey for tomorrows stage.

The intermediate sprint was next and it was Nacer Bouhanni's Cofidis Solutions Credits team mate Luis Angel Mate crossing first. The Cofidis team have been very active since the young Frenchman was forced to abandon, making sure they take some wins from the 2015 Tour.

Back in the peloton it was another hotly contested sprint for the remaining points. Giant -Alpecin giving John Degenkolb a long lead out which got a bit heated, elbows out and plenty of push and shove with Lotto Soudal approaching the line. Degenkolb finished off his teams good work, taking the points over Peter Sagan of Tinkoff - Saxo, Andre Greipel of Lotto Soudal and Mark Cavendish of Etixx - Quick Step.

From there the race was in a holding pattern. On regular occasions the time gap would drop to one minute but as soon as it did, the pace came out of the chase and it drifted back to two minutes. With today's stage being the last real opportunity for the pure sprinters to take a victory, the breakaway was never going to be allowed too much distance. Lotto Soudal again did all the heavy lifting for Greipel, his team mate Thomas De Gendt on the front and virtually controlling the entire race himself.

With 18.6 miles to go the gap was down to 30 seconds. Sensing the breakaways day would soon be over, Teklehaimanot rolled back to the bunch leaving four riders up the road. As every breakaway should, the four riders put their heads down, making it as difficult as they could for the peloton to catch them.

With 15.5 miles to go both groups on the road were sitting on 34 mph, motoring towards the finish. In the peloton it was the GC teams driving the pace, BMC Racing Team, Tinkoff - Saxo, Movistar and Team Sky controlling the front of the race.

At the 12.5 mile mark, it was TV time for the breakaway. The time gap was down to 15 seconds and it was only a matter of time before they were swept up.

With 9.3 miles to go, two riders from the breakaway were left, Luis Angel Mate of Cofidis Solutions Credits and Brice Feilu from Bretagne-Seche Environnement. Both riders continued to attack, no doubt hoping to be awarded the Most Aggressive Rider for the stage.

The race was back together at the 6.2 mile mark and it was all guns blazing from then on. A slight tailwind and some downhill sections pushed the pace well above 40 mph.

Team Sky took control with 5.2 mile to go and were sitting on 44 mph trying to keep Froome out of trouble. BMC Racing Team were right beside them doing likewise for Tejay van Garderen. It wasn't until the 3.1 mile marker that the sprinters teams took over the race. Lotto Soudal, Giant - Alpecin and Etixx - Quick Step fighting it out for prime position at the head of the race.

It was now a traditional drag race to the finish. Giant - Alpecin had the early ascendency but with 1.8 mile to go it was a huge task to hold it all the way to the finish. They were doing everything they could to stay on the front!

1.25 mile remaining and Giant - Alpecin were swamped by FDJ and Team Katusha, losing position and a possibility of the stage win. Lotto Soudal brought Greipel forward with under a mile to go and it looked as though the Gorilla was in a good position to make it a trifecta. Team Katusha still held the lead with their man Alexander Kristoff sitting third wheel, followed by Cav and then Greipel.

Greipel was clearly bursting with confidence, starting his sprint with 700ft to go and looking strong. Cav was quick to response as was Sagan, both men locking onto Greipel's wheel.

With 150 ft to go Cav went to the right, Sagan to the left and it was Cav that had the legs to take the stage and his 26th Tour de France win.

A huge day for Cavendish but more importantly his team. They can celebrate a job well done, and it will no doubt ease some of Tony Martin's pain.