The Curse of the Yellow Jersey 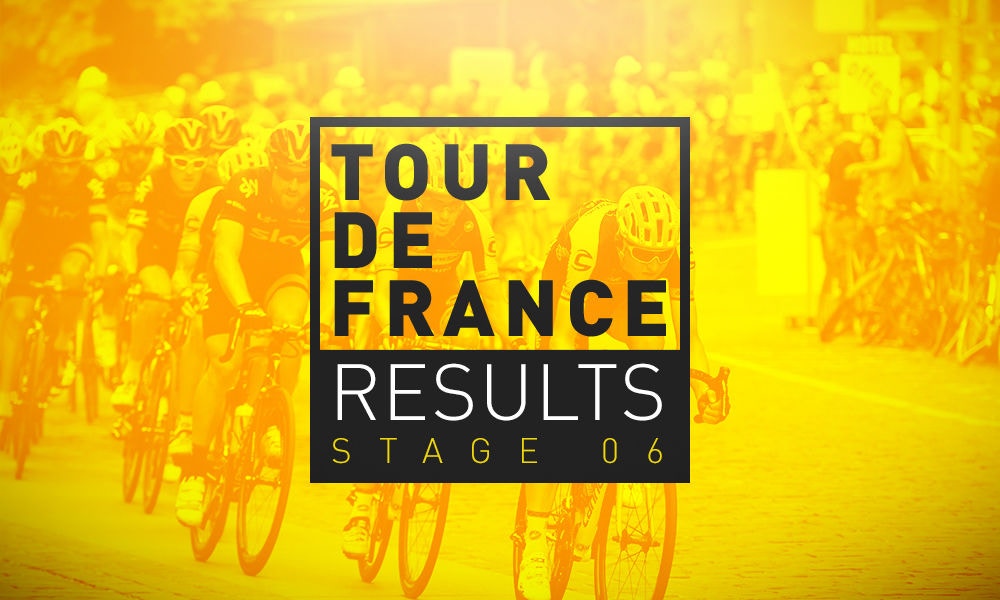 The curse of the yellow jersey may have struck again! Tony Martin touching wheels on the final climb and going down straight onto his shoulder. He finished the stage clutching his shoulder, unable to hold his handlebars and putting in doubt the likelihood he will start tomorrows stage. Devastating news for the team in what would have otherwise been a great day with Zdenek Stybar taking the stage victory.

At the start of today's stage you could almost feel a collective sigh of relief from the peloton, the first few hectic days of the tour were over and they could now settle into the grind. Three riders were allowed to go up the road and form the day's break. Daniel Teklehaimanot of MTB-Qhubeka p/b Samsung, Perrig Quemeneur of Team Europcar and Kenneth Vanbilsen of Cofidis Solutions Credits were given a lot of space. During the first hour of the race they were able to extend their lead to over 12 minutes.

The sprinters teams of Lotto Soudal and Giant - Alpecin begrudgingly coming forward and doing the pace making to keep the stage from getting away.

There were three KOM's opportunities up for grabs today, none of them especially long or steep but all contributing to points for the jersey nonetheless. It was clear that Teklehaimanot was keen to pick up every available point and move himself into the polka dot jersey, stretching his legs and taking the first climb up the Cote de Dieppe comfortably. With climbs one and two coming in very close succession, the three riders were now playing cat and mouse with each other, trying to ensure they didn't leave the stage empty handed. Vanbilsen jumped from Quemeneur's wheel with 300m to go and appeared to have opened up enough of a gap to take the point, but Teklehaimanot was not to be denied, throwing to the line and narrowly ascending the Cote de Pourville-Sur-Mer first.

From there it was all Lotto Soudal and Giant - Alpecin. The two teams doing 100% of the work, slowly but surely bringing down the time gap to 1 minute at the intermediate sprint. In the three man breakaway there was no contest, Team Europcar rider Quemeneur crossing in first position, a small reward for his efforts in the 2015 Tour. Today is the third day he has been part of the breakaway, a very tough way to earn a living! John Degenkolb rewarded his team mates heavy lifting at the front of the peloton by beating out the other sprinters for fourth place.

The third KOM opportunity of the day marked a historic event for Teklehaimanot. He crossed in first place giving him three KOM points, taking him into the lead of the competition. The Eritrean had dreamed about this moment since he first discovered cycling. "I was always more excited by the fight for the polka dot jersey than the yellow." Tomorrow he will pull on the polka dot jersey with immense pride.

With the peloton closing in, Vanbilsen had one last show of defiance. With 7.5 miles to go and the peloton 30 seconds a drift, he launched an attack and tried his hand at going solo for the stage victory. It would prove futile with the peloton hitting speeds well above 40 mph as they closed in on the finish.

A mostly quiet day exploded with 3.1 miles to go, BMC Racing Team drilling it on the front, the peloton stretched out in one long line. Etixx - Quick Step lining up behind BMC Racing Team waiting for their chance. With 1.9 miles to go Giant - Alpecin delivered an epic lead out, staying on the front until the 1.24 miles mark and virtually sprinting into the tight left and right before the climb.

Etixx - Quick Step took over with 1.25 mile to go but were quickly swapped by Cofidis Solutions Credits and Giant - Alpecin. As Tony Martin moved back through the field he touched the wheel in front and went straight down on his shoulder, taking out Nibali in the process and completely stopping any momentum of the riders behind.

Meanwhile at the front of the race Etixx - Quick Step rider Zdenek Stybar attacked and was literally left to ride away. Peter Sagan was in second wheel but didn't want to carry other riders across so he sat up. That gave Stybar enough of a gap to ride to the finish, even having time to salute a great victory.

The riders that had crashed with Martin started coming through, but Martin looked in a very bad way, clutching his shoulder, unable to put any pressure on his handlebars. Three team mates waiting with him and pushing him across the line.