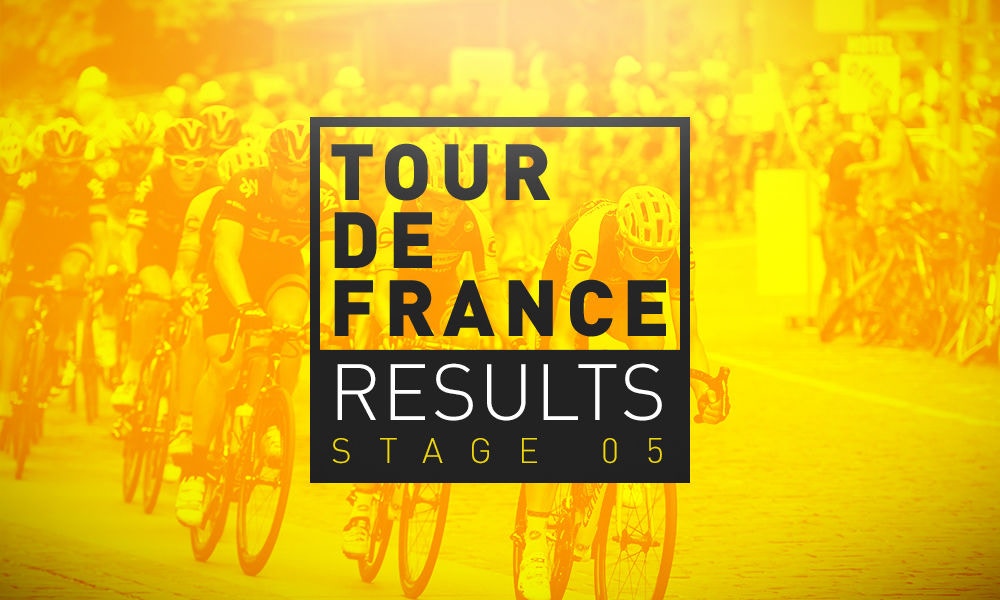 Four hard days of racing had clearly taken their toil on the peloton, today's stage without the drama of the previous stages.

It was an emotional day for many of the riders, today's route passing through Villers-Bretonneux where thousands of ANZAC's were killed in battle. Tour de France director Christian Prudhomme was proud to be able to honor their fighting spirit in the year of the 100th anniversary of ANZAC Day.

Stage 5 started in unusual circumstances, Nicolas Edet of Cofidis Solutions Credits and Pierre-Luc Perichon of Bretagne-Seche Environnement breaking away, but Edet quickly decided that their escape had no chance, so he went back to the bunch. That left Perichon solo out in front, who stubbornly decided to stay away for as long as possible. Rain and wet roads claimed an early victim, promising young French sprinter Nacer Bouhanni suffered a crash and was forced to withdraw from the race.

The scenario for the peloton was perfect, a solitary rider down the road making the task of managing the break a simple one. Perichon wasn't allowed any more than a 2 minute gap, the peloton playing with the lone Frenchman.

The status quo remained until the intermediate sprint. Perichon had enough of a gap to win the intermediate sprint, but behind him all the big sprinters Andre Greipel of Lotto Soudal, Mark Cavendish of Etixx - Quick Step, Peter Sagan of Tinkoff - Saxo and John Degenkolb of Giant - Alpecin were battling it out for the remaining points. Andre Greipel obviously enjoys being in green, he looked much stronger than his counterparts and comfortably crossed for second place, increasing his lead in the sprint jersey competition.

Following the sprint it was 'grupo compacto' with 56.25 mile to go.

It wasn't until the 50 miles to go mark that the peloton decided to race. Driving into a headwind and approaching a 90 degree turn, BMC Racing Team came to the front and tried to get to the corner first. They succeeded and now riding with strong cross winds, they put the foot down in an attempt to split the peloton. It didn't succeed immediately but it did signal an increase in pace. Team Sky were next to come forward, using the crosswinds and winding roads to pile the pressure on. This sharp rise in pace eventually caused a large split. Big names like Rafal Majka and Ivan Basso from Tinkoff - Saxo were dropped as was Pierre Rolland from Team Europcar and Team Sky's lieutenants Richie Porte and Peter Kennaugh.

For the next 31.25 miles it was all shadow boxing. There was no real intensity in the peloton, instead, the big teams lined up at the front and kept strict control.

This only served to make the riders more and more nervous as they got closer to the finish. With 15.6 miles to go there was a crash at the back of the field that came from no where. Thibaut Pinot of FDJ continued his terrible run of luck, crashing down and having to work his way back to the front group.

The teams started to wind it up with 9.5 mile to go. Initially it was the teams of the GC contenders just trying to keep the pace high and the race safe. Michael Rogers of Tinkoff - Saxo was sent to the front of the race to protect Alberto Contador and also keep Sagan in a good position for the finish. BMC were next in line, coming forward with 5.6 mile to go and holding their position until the 3.5 mile mark. The teams now driving into a block headwind making controlling the race extremely difficult.

With 1.9 mile to go it was the sprint train of Etixx - Quick Step versus MTN-Qhebeka p/b Samsung. Etixx - Quick Sep were too strong, seeing off the African team and owning the front of the race with 1.25 mile left. Giant - Alpecin who had been unsighted all day took over with 1 mile to go. A lot of teams had misjudged the finish today, pushing uphill and into a headwind they all dropped off shortly after putting their nose in front and Giant - Alpecin were no different. With 0.6 mile to go Mark Renshaw did what he always does and tried to set the race up for Cav, but the Manx Missile lost his wheel and was now freelancing.

Alexander Kristoff of Team Katusha came off Renshaw's wheel and started his sprint from a long way out. Cav followed him through and tried to go around but lacked the punch to catapult past. The two were neck and neck with 300 ft to go, and then out of nowhere the green jersey wearer Greipel powered past both of them. Clearly buoyed by his good form, Greipel used his massive strength to sustain a huge effort which would give him the win. Kristoff and Cav fading significantly 150ft out from the line in contrast to Sagan who came from the clouds to take second on the day.

Tomorrow shapes up as another day for the sprinters. Well done to Michael Matthews of Orica-GreenEDGE who was rewarded for battling through the race with the Most Aggressive Rider Award for the day.