A Fairytale Victory for Tony Martin 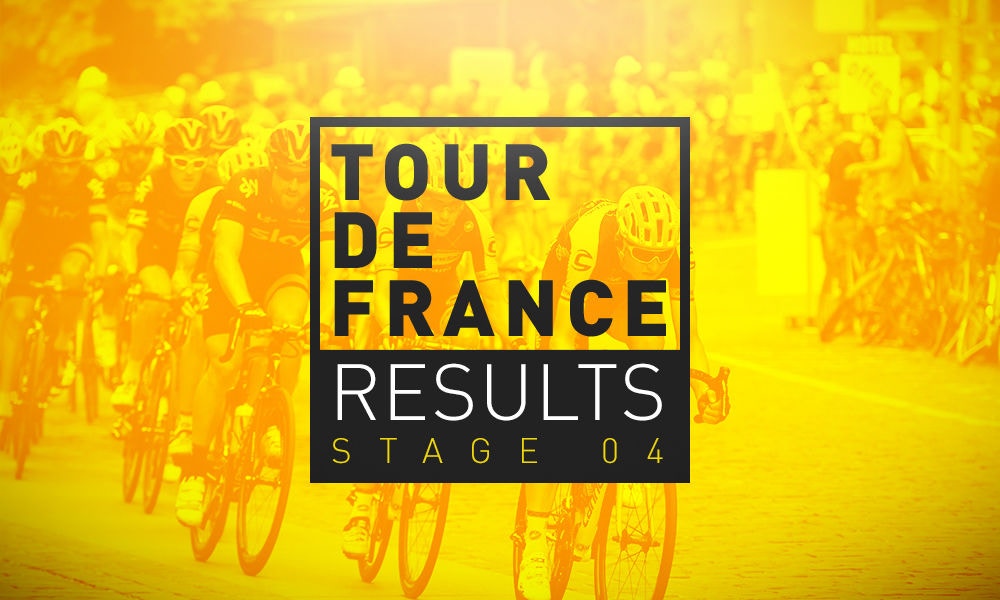 The cobbles of northern France promised so much, and delivered in spades today. A fairytale end for Etixx - Quick Step and Tony Martin, who moves into the yellow jersey. The GC race remains the same but if today proved anything, it's that it will be one hell of a fight to the finish.

For the third day in a row the breakaway was made up of four riders. Today it was Lieuwe Westra of Astana Pro Team, Thomas De Gendt of Lotto Soudal, Perrig Quemeneur of Team Europcar and Frederic Brun of Bretagne-Seche Environnement. The peloton were happy for these four to go up the road, their lead extending to almost 10 minutes during the first hour of racing.

On approach to the only categorized climb of the day, the peloton showed the first signs of intensity. Giant - Alpecin, followed by Tinkoff - Saxo and BMC Racing Team all coming to the front and slowly bringing the time gap down. Team Sky took over the pace hoping to keep their team leader and current yellow jersey wearer, Chris Froome safe and out of the trouble that felled him a year ago.

Within 10km of the first cobbled sector of the day, Team Sky launched a full on sprint that decimated the peloton. There were multiple groups on the road, riders caught out by the sudden acceleration. For Team Sky the best form of defense was offence. The first sector of cobbles were negotiated by the main field without incident, but the acceleration did put a serious dent into the breakaway's lead, now down to 50 seconds.

The pressure from the main field did ease following the cobbles and the breakaway were again able to extend their lead, this time out to almost 4 minutes.

Thomas De Gendt made the most of his day in the lead, taking the intermediate sprint to go along with his KOM win earlier in the day. The sprinters were left to fight out for the remaining points in what can only be described as messy. No team really took the ascendancy which left the sprinters to fight it out amongst themselves. Mark Cavendish eventually crossed first of the big name sprinters, extracting a small amount of revenge from stage 2. At the conclusion of the sprint, Peter Sagan enhanced his reputation as a joker in the peloton, cheekily suggesting to the other sprinters they continue their effort and try to break away from the field, which was greeted with a stern no from Andre Greipel.

With 42 miles to go, someone in the peloton pushed the button and the race was on in earnest. Over the next 12.5 miles the peloton slowly increased the tempo, and just as they did the rain began to fall. A combination of wet roads and nervous riders caused several crashes prior to the second cobbled sector.

Sector six - Astana Pro Team and Vincenzo Nibali set about repeating the result from last year. Lars Boom escorting Nibali to the front of the field, piling on the pressure and stretching the field. The time gap of the breakaway is brought down to 10 seconds at the completion of sector six.

Sector five - Team Sky appeared to be fighting back, Luke Rowe leading into the sector with Froome on his wheel. But Astana Pro Team launched a huge attack to counter, Lars Boom first, then Nibali. The attack so ferocious Nibali found himself at the front of the peloton driving the pace and distancing the yellow jersey. This forced Froome to take the responsibility himself and pull Nibali back just prior to the completion of the sector.

Sector four - With all the GC favourites still in touch it's time for BMC Racing Team to have their turn at the front. The team riding tempo and providing a brief respite.

Sector three - LottoNL - Jumbo led into the third sector, but true to form Nibali charges to the front and again puts the whole peloton into stress. Aside from his slight frame, you could have sworn Nibali was a pave specialist. Again the peloton stretch out, and again they reform towards the end of the sector.

Sector two - By this point the peloton had been whittled down to a select 40 or so riders and for the first time Tinkoff - Saxo lead into the sector and control the pace. It appeared the early work from Astana Pro Team was now starting to hurt them. The aqua jersey being overwhelmed at the front of the group by the fluro yellow of Tinkoff - Saxo.

Sector two proved to be the undoing of Thibaut Pinot from FDJ. The young Frenchman had a mechincal with 1km remaining and never recovered. Initially getting a spare wheel, and then having to wait for a new bike. His tour effectively over. Drama too for Tony Martin of Etixx - Quick Step, having to change his bike and work his way back to the front group.

Sector one - The final cobbled sector of the day and no one was left wandering. Nibali launched yet another attack, again creating a small gap, but again being brought back. Zdenek Stybar of Etixx - Quick Step was the next to go, followed by Greg Van Avermaet of BMC Racing Team, and then Geraint Thomas of Team Sky. Each rider coming over the top of the other, and then falling apart as their legs screamed out for mercy. Team Sky played the perfect race, delivering Froome to the end of the cobbles in second wheel.

With just under 2 miles to go, Tony Martin went in an attempt to take the yellow jersey from Froome. Martin trailed by 1 second, so was looking for time bonuses at the finish or some separation. As it turned out, he got both. Martin buried himself and did what only he can do, time trialing away from the field, opening up enough of a gap to hold on for the stage victory. To make the victory even sweeter for the team, Martin finished the stage on a team mates bike. Matteo Trentin giving Martin his bike so that he could rejoin the race as soon as possible. A victory that is sure to build team moral.