Quintana Puts Froome to the Sword 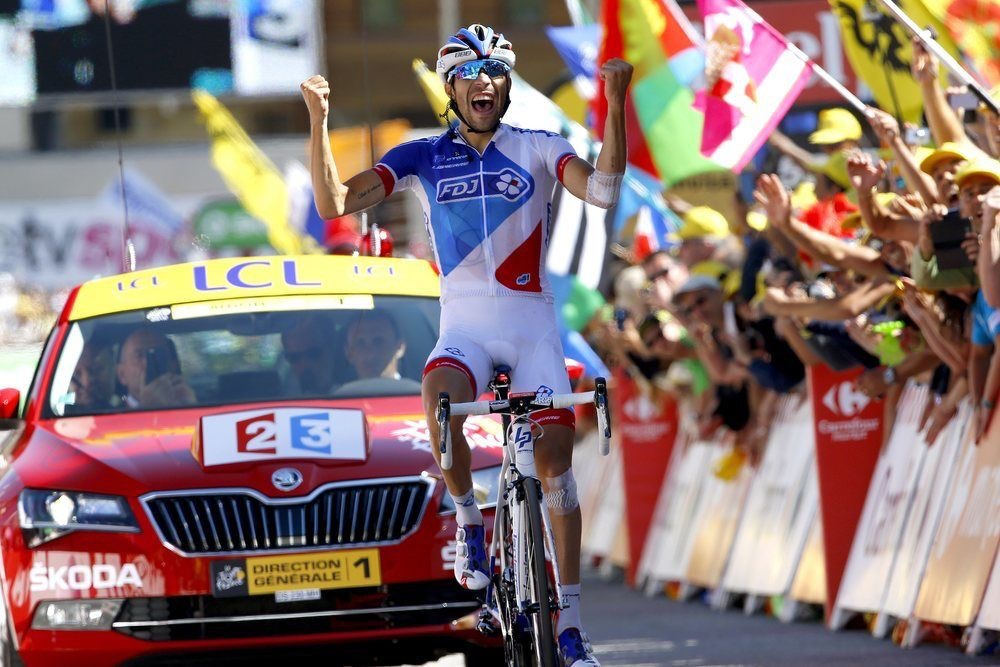 The penultimate stage of the 2015 Tour de France delivered the most action packed race yet. Quintana enhanced his reputation as the best climber in the world, while Froome proved his strength of body and mind to hold on to his yellow jersey despite an onslaught of attacks.

Pre race predictions of the stage being full gas from the flag proved to be wrong. Facing a 15mph headwind in the valley and 17700 ft of climbing on the stage, the peloton sat up and allowed four riders to go clear, Lars Bak of Lotto Soudal, Nicolas Edet of Cofidis Solutions Credits, Alexandre Geniez of FDJ and Ramunas Navardauskas of Cannondale - Garmin. The breakaway stretched out to almost seven minutes advantage as they began the Col de la Croix de Fer. The hors category climb was 18 miles in length at an average gradient of 5.2%.

The slow start allowed a second group of ten riders including Warren Barguil of Giant - Alpecin and Rafal Majka of Tinkoff - Saxo to escape the peloton. This caused a response from AG2R La Mondiale who were in danger of losing the KOM jersey and best overall French rider if the breakaway got away from Romain Bardet. The chase was led by Jean-Christophe Peraud of AG2R La Mondiale who was in the big chain ring and charging up the climb 4kph faster than the two groups in front of him. His pace setting brought back the second group on the road containing ten riders, and cut the advantage of the four riders at the front of the race from 7:45 to 3:43 with 3.7 miles of the climb to go.

Knowing the huge amount of time they had to make up on Froome, the attacks from Movistar and Astana Pro Team began with 3.1 miles remaining on the climb. Michele Scarponi of Astana Pro Team went to the front and destroyed the peloton, eliminating all but a dozen riders and reducing Team Sky to three. Alejandro Valverde from Movistar then took his cue to attack, quickly opening up a 30 second advantage approaching the top of the climb. His team mate Nairo Quintana completed the one-two punch by attacking Team Sky with 2.5 miles still to climb.

These attacks put huge amounts of pressure on Team Sky, Nicolas Roche and Wouter Poels blowing up and dropping from the group. Only Richie Porte and Chris Froome remained from Team Sky, Porte forced to try and close down the dangerous move. Vincenzo Nibali of Astana Pro Team waited patiently on Froome's wheel but he too took his opportunity and attacked the yellow jersey with 1/2 mile remaining. This attack finished off Team Sky, Porte dropping and leaving Froome isolated against Quintana, Valverde and Nibali.

Calm was restored on the downhill with Froome, Nibali, Valverde and Quintana sitting up and waiting for reinforcements. This led to a counter attack from six riders, Pierre Rolland of Team Europcar, Thibaut Pinot of FDJ, Ruben Plaza and Jose Serpa of Lampre - Merida, Ryder Hesjedal of Cannondale - Garmin and Winner Anacona of Movistar.

With 8.7 miles remaining in the stage and the small matter of the Alpe d'Huez to overcome, the race looked like this: Alexandre Geniez of FDJ, who had broken clear of the initial breakaway earlier in the day, was solo at the front of the race, followed by a group of nine riders containing Pinot, Hesjedal and Rollard 1:35 behind, and then the yellow jersey group a further two minutes back.

Onto the foothills of the Alpe d'Huez and tragedy for Nibali who had to change his bike, losing any chance he had of gaining time on his rivals. Was this karma repaying him for attacking when Froome had a mechanical yesterday?

As promised, Quintana attacked early on the final climb with 8 miles remaining. The attack stretched Froome, but with the help of Porte he was able to nullify it. 2000ft later and Quintana was at it again, this time it was up to Wouter Poels to bring Quintana back. A brief respite ended when Valverde attacked with 6.2 miles remaining, Team Sky making the decision not to chase. 1300ft later Quintana attacked yet again, this attack breaking the back of Contador and Froome. Froome still had Porte and Poels ahead of him, and it was up to his lieutenants to pace him back to Quintana and Valverde who were now together and riding away.

Movistar were playing the perfect tactical race. Just as Valverde had dropped off the pace, Anacona who was in an earlier breakaway had sat up and joined Quintana with 5 miles remaining in the stage. The pair were now fully committed to the climb and firmly in the hurt locker to open up the time gap back to Froome.

With 5 miles to go there was a new leader at the front of the race. Hesjedal and Pinot were fighting each other up the mountain, and in doing so had caught and passed Geniez. One mile later, Pinot attacked Hesjedal and gapped the Canadian.

With 2.7 miles remaining Quintana made an all or nothing attack, dropping his team mate Anacona and going solo. He was opening up the gap but running out of road. With 1.9 mile to go Quintana had a one minute advantage over Froome who was visibly struggling, but more remarkably, Quintana was closing the gap to Pinot at such a rate, a stage victory was looking on the cards.

Pinot would hold on for the stage win, crossing the line 17 seconds ahead of Quintana who rode the race of his life, putting 1:20 into Froome and doing everything he could in an attempt to take the overall win. Froome had suffered but defended his yellow jersey and would ride into Paris to collect another Tour de France title.

Thoughts immediately reflect back to stage 2 where Quintana lost 1:28 to Froome in the cross winds. Had Quintana and Movistar been more attentive, the 2015 could have played out a very different way.

Who is your bet for next year? Quintana or Froome?

As always - a big thanks to Graham Watson for yet another awesome image.