Romain Bardet Cleans Up on Stage 18 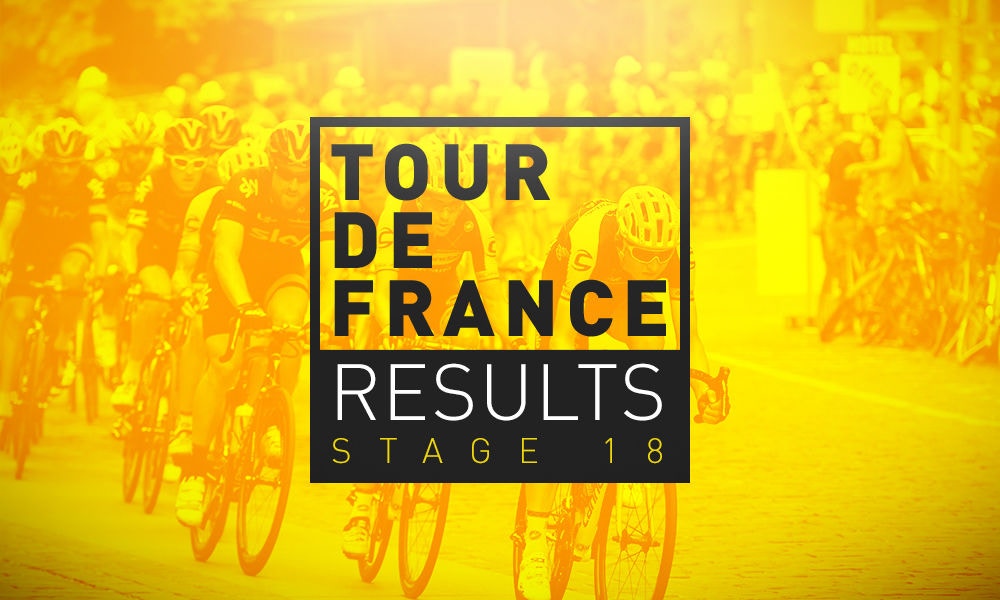 Young French rider Romain Bardet attacked with flair on the penultimate climb of the day and rode solo to the biggest victory of his short career. The GC contenders again battled it out, Team Sky loosing riders but Froome steadfast in yellow.

It was the second day in a row the peloton had to climb over 20,000ft of elevation, and the signs of fatigue were starting to show. 37 riders have abandoned the tour so far, that number potentially growing with three stages still remaining.

There was no easing into today's stage as riders were greeted with the Col Bayard, a 20,852 climb at an average gradient of 7% from the get go. The harsh nature of the start would quickly separate the peloton. Once again a very large breakaway formed at the front of the race featuring six out of the top 20 overall riders. Romain Bardet and Jan Bakelants of AG2R LaMondiale, Andrew Talansky of Cannondale - Garmin, Pierre Rolland of Team Europcar, Serge Pauwels of MTN-Qhubeka p/b Samsung and Thibaut Pinot of FDJ. Add to that group Joaquim Rodriguez of Team Katusha, who was in the hunt for the polka dot jersey with 45 points up for grabs on the stage. A total of 29 riders had made the break.

There were four short punchy climbs to follow the Col Bayard, all of them between one and two miles with averages gradients of 7.5% - 8.7%. Rodriguez moved himself into the lead of the KOM competition by crossing all of them in first place.

With 60 miles to go the breakaway had an advantage of four minutes, but they still had the HC category climb of the Col du Glandon and the category 2 Lacets de Montvernier to contend with.

There was an intriguing battle within the battle taking place between Giant - Alpecin and AG2R La Mondiale. Going into the stage Warren Barguil of Giant - Alpecin was the best placed Frenchman narrowly ahead of Romain Bardet. As Bardet had made it into the breakaway, the time advantage halfway through the stage meant he had moved ahead of Barguil. As a result, three riders from AG2R La Mondiale were driving the breakaway, and three riders from Giant Alpecin were driving the peloton. Both teams had well and truly opened the throttle and the intensity of the race kicked up a notch.

You would have thought the intermediate sprint at Riouperoux would have been a non-affair given no one in the breakaway was any chance in the competition, but it did cause a split. Thomas De Gendt of Lotto Soudal accelerated into the sprint and just kept on going. Not all of the breakaway were awake to the move, a group of 11 riders moving away, the remaining 19 riders from the breakaway 30 seconds a drift. Not content with creating the initial selection De Gendt attacked his group again and went clear. Within 41 miles remaining in the stage he was riding solo in front hoping to repeat the heroics of Geschke from yesterday.

At the bottom of the Col du Glandon the breakaway were back together with a 2:30 lead over the peloton. The climb was 13.5 miles in length at an average gradient of 5.1%. In the breakaway young Trek Factory Racing rider Bob Jungles was setting the tempo and back in the peloton Team Sky had taken up their usual position at the front. They weren't applying any pressure though, allowing the breakaways advantage to extend to 3:30 with 5.6 miles of the climb to go. This relaxed pace saw Barguil, Mathias Frank of IAM Cycling and Robert Gesink of LottoNL - Jumbo launch attacks and ride clear.

Team Sky were showing the first signs of vulnerability, Richie Porte and Wouter Poels struggling and dropping off the pace with 5 miles of the climb to go. Alberto Contador of Tinkoff - Saxo was the next rider to go, launching an all or nothing attack with 28 miles remaining in the stage. The Contador of old was on display, he was out of the saddle and dancing his way up to Gesink, Barguil and Frank. Once the four were together they collaborated and extended their advantage over the yellow jersey group to one minute.

Towards the summit of the Col du Glandon the breakaway saw a flurry of attacks. Rolland, then Bardet, then Jakob Fuglsang of Astana Pro Team. Adding to the drama a tired Fuglsang looked behind him and then found himself on the ground, crashing out in completely innocuous circumstances. Bardet crossed the Col du Glandon in first place, closely followed by Winner Anacona of Movistar.

Despite riders taking big risks on the descent the yellow jersey group were back together, Contador reeled in and Valverde catching up. Up ahead Bardet maintained a 30 second advantage over the remaining breakaway and was drilling the descent.

Bardet reached the final climb of the day with a 43 second advantage. The Lacets de Montvernier was a short climb at 2 mile in length, but with an average gradient of 8.2% and 17 hairpin bends it was going to be a tough one. Bardet fought his bike all the way up the climb and managed to crest the climb with a 38 second advantage with 6.2 miles remaining.

In the yellow jersey group the attacks continued. Rafal Majka was setting the tempo for his team mate Contador, who attacked half way up, splitting the group in half. All the big players were still there, sizing each other up for the final few miles and the hair raising descent.

At the front of the race Bardet lost nothing on the descent, still holding a 40 second advantage over Rolland who was chasing hard but going nowhere. Bardet would cross the finish line in first place and mark one of the greatest days for him at the tour. He would finish the day as the equal leader in the KOM competition, be awarded the most aggressive rider on the stage and also become the highest place Frenchman in the tour.

The yellow jersey group came home together, seemingly calling a truce until they resume hostilities tomorrow.

What was your favorite moment of Stage 18?