The GC Contenders Sense Blood in the Water 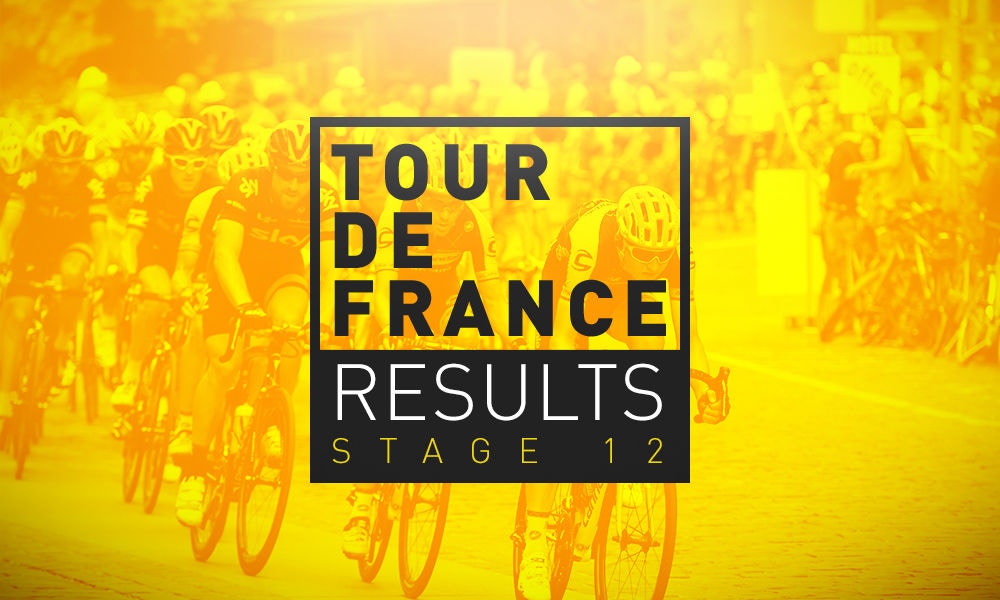 Stage 12 produced an epic day of aggressive racing. Team Sky were under heavy fire on the final climb, one by one all of the GC contenders challenged the yellow jersey wearer Chris Froome, who for the first time looked vulnerable. There's no doubt the race for GC honors is not over, and if today was anything to go by, the final week will be spectacular.

There were four epic mountain passes on the stage, but the start of the day belonged to the sprinters. The intermediate sprint was only 12.5 mile after the start and as a result Lotto Soudal we keen to keep the peloton together, trying to set things up for Andre Greipel to reclaim the green jersey on his 33rd birthday. The Gorilla obliged and took first place in the sprint, but current green jersey wearer Peter Sagan of Tinkoff - Saxo finished third and maintained the slimmest advantage in the sprint competition.

With such large time gaps in the general classification, a large breakaway group was always on the cards for today's stage. 22 riders formed the days breakaway with some big names amongst them. Jakob Fuglsang and Lieuwe Westra of Astana Pro Team, Sylvain Chavanel of IAM Cycling, Joaquim Rodriguez of Team Katusha, Romain Bardet of AG2R La Mondiale, Michal Kwiatkowski of Etixx - Quick Step and Jeremy Roy of FDJ the most notable.

The first climb of the day was the category 2 Col de Portet-d' Aspet, and at 2.7 miles in length with an average gradient of 9.7%, it was the smallest of the day. Georg Preidler of Giant - Alpecin crossed first, followed by Roy and Westra. At the top of the climb the time gap was just over five minutes and Team Sky were once again in control of the peloton.

The second climb of the day was the first of two category 1 climbs on the stage. The Col de la Core 8.8 mile in length with an average gradient of 5.7%. The breakaway started the climb in sunny weather, but as they approached the top it began to sprinkle with rain. Reported thunderstorms at the finish line only adding to the potential drama of the day. The diminutive Croatian from Lampre - Merida, Kristijan Durasek surprised his breakaway compatriots by jumping early, having enough strength to easily crest the climb first. The breakaway group had extended their advantage to over eight minutes, but with two huge mountain passes to come the race was still anyone's.

Two contrasting descents of the Col de la Core shaped the race. The breakaway group attacked each other, causing split after split, with no decisive selection made initially, whereas the peloton still being led by Team Sky, took a very cautious approach. This careful descent enabled the breakaways advantage to extend out to over 12 minutes with 43.5 mile to go.

Onto the second last climb of the day, the Port de Lers, 8 miles in length with an average gradient of 6%.

With the breakaway carrying too many passengers, three riders decided to ride clear, World Champion Kwiatkowski, Georg Preidler and Sep Vanmarcke from LottoNL - Jumbo quickly opening up a gap of over one minute. A group of seven riders from the breakaway including Bardet, Fuglsang, Rodriguez, Louis Meintjes of MTN-Qhubeka p/b Samsung, Romain Sicard of Team Europcar, Mikael Cherel of AG2R La Mondiale and Gorka Izagirre of Team Movistar eventually tried to bridge across, but they left their charge too late. Kwiatkowski cresting the climb first, followed by Vanmarcke, the pair still holding a slim 10 second advantage over the chasers.

Back in the peloton and Team Sky had started to apply the pressure. They knew the attacks were going to come today, so they got in first, gradually increasing the tempo and putting everyone into difficulty. The first big name to go was Jean-Christophe Peraud of AG2R La Mondiale shortly followed by Dan Martin of Cannondale - Garmin.

Kwiatkowski and Vanmarcke made the most of their small gap, descending like stones and opening up their advantage over the chasers and the peloton, who were now at 10 minutes. Again the peloton were cautious on the descent as the weather conditions took a turn for the worst. Heavy rain bordering on torrential started to fall, and reports of hail stones at the finish would have made the peloton very nervous. A crazy thought considering the day began with clear skies and a temperature of 33 degrees.

All that remained was the HC category climb of the Plateau de Beille, 9.9 miles in length and an average gradient of 7.9%.

Kwiatkowski and Vanmarcke had pushed their advantage over the chasers to almost two minutes, and almost 12 minutes to the peloton. Neither of the two would be considered natural climbers, but they were turning themselves inside out for the stage victory. The pace proved too much for Vanmarcke, cracking with 8.5 miles to go, Kwiatkowski now solo and holding a 90 second time gap to the seven chasers.

Back in the peloton and for the first time on the stage we saw a team other than Team Sky come to the front. LottoNJ - Jumbo and Movistar took off, the pace well and truly increasing. It didn't take long for the Sky train to come to the front again and assume control, but it would be short lived. Michael Rogers of Tinkoff - Saxo moving to the front and setting the tempo.

Up the road and the chasing group of seven had been cut to three, Rodriquez, Fuglsang and Bardet. These elite climbers were closing the gap to Kwiatkowski and now the stage win looked to be between them. Rodriguez looked the best of the three and with 5 miles to go he launched a huge attack that Fuglsang and Bardet couldn't follow. In no time at all he had caught Kwiatkowski and was now the leader on the road.

The peloton had been whittled down to 11 riders, and it was still Team Sky riding tempo on the front, no one prepared to risk an attack.

Finally, Alberto Contador of Tinkoff - Saxo attacked with 4.4 miles to go. It didn't bring an immediate reaction from Team Sky, they simply continued to ride tempo to bring him back. As always happens, as soon as Contador was brought back, another attack was launched. This time it was Vincenzo Nibali of Astana Pro Team. Alejandro Valverde of Movistar was the next to attack, all of the GC contenders were lining up to attack Team Sky. All the while Richie Porte was on the front riding strong consistent tempo batting away every attack. Predictably Nairo Quintana was the next to launch an attack, and while it wasn't successful it did break Porte, Team Sky now with only Geraint Thomas and Chris Froome left standing with 3.1 miles to go.

And then out of nowhere Froome attacked the group, Quintana locked on his wheel, closely followed by Contador and Tejay van Garderen. As soon as that was neutralised Valverde attacked, Froome closing that down, which lead to a counter attack from Quintana. The GC contenders now agitated and sensing blood in the water.

Team Sky lieutenant Thomas, who has been riding out of his skin, managed to ride himself back to the leading group and control things until the finish. Valverde pinching a couple of seconds on the line but the group finishing together.

Overshadowed by the dramatic racing behind him, Rodriguez went on to take a famous victory, his second of the 2015 tour and arguably the best of his career.