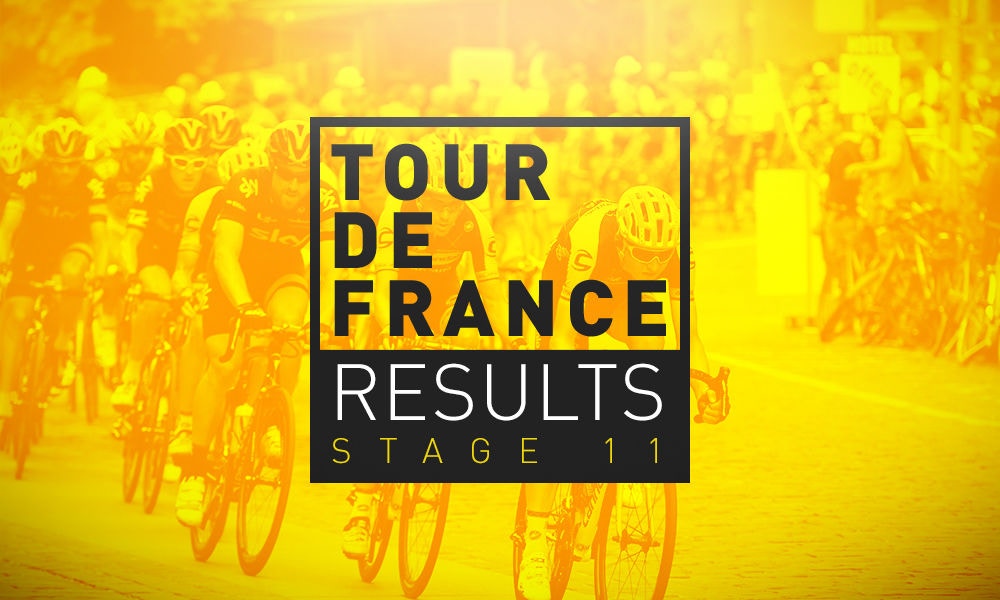 Stage 11 produced an aggressive day of racing with six categorised climbs combining for almost 20,000 ft of elevation. There was attack after attack, and for the first time this tour, a breakaway succeeded.

Early on today a powerful group of four riders tried to breakaway comprising of Lieuwe Westra of Astana Pro Team, Michal Kwiatkowski of Etixx - Quick Step, Bob Jungles of Trek Factory Racing and Edvald Boasson Hagen of MTN-Qhubeka p/b Samsung. Despite their best efforts they were never allowed more than 45 seconds, which pushed the average speed over the first hour up to a superfast 30mph. They were reined in with the first climb of the Cote de Loucrup in sight. Ever the opportunist Thomas Voeckler of Team Europcar countered immediately and got to the top of the climb first.

This first climb split the peloton in two and put green jersey wearer Andre Greipel of Lotto Soudal into difficulty. Approaching the only sprint opportunity of the day, Greipel was in the second group on the road and Lotto Soudal were forced to try and make up ground before the sprint. They did all they could, but by the time Greipel was back on he was flat and could only manage ninth. Peter Sagan was able to stay with the first group and continued his consistency crossing in second position and taking back the green jersey. The fight for green proving to be one of the most interesting stories of the tour.

The climbs kept coming, the second for the day up the Cote de Bagneres-de-Bigorre was won by FDJ rider Steve Morabito, and again the climb caused a split in the peloton. 15 riders opened up a small advantage including Romain Bardet of AG2R La Mondiale and Thibaut Pinot of FDJ. It was clear that despite Team Sky's dominance the other teams were not going to make this an easy ride to Paris.

Team Sky were forced to close it down, having to remain vigilant not to get caught out.

After the peloton came back together at the 43.5 mile mark, there was another counter attack. Mikael Cherel of AG2R La Mondiale, Laurens ten Dam of LottoNL - Jumbo and Jacques Janse van Rensburg of MTN-Qhubeka p/b Samsung. Shortly after this counter attack, Cherel's AG2R La Mondiale team mate Alexis Vuillermoz made it across along with previous polka dot jersey wearer Daniel Teklehaimanot of MTN-Qhubeka p/b Samsung.

The move from Teklehaimanot proved to be a good one, crossing the third climb of the day, the Cote de Mauvezin first, perhaps thinking of regaining the polka dot jersey.

Once again the peloton were back together and once again this led to a counter attack. Stage 11 was producing the most aggressive racing we had seen so far in this years tour. Five riders eventually broke clear including previous escapees Voeckler and Morabito, Rafal Majka of Tinkoff - Saxo, Serge Pauwels of MTN-Qhubeka p/b Samsung, and Emmanuel Buchmann of Bora-Argon18.

The aggressive start to the day continued, after two hours the average speed was 28mph despite crossing three categorized climbs.

Sensing this would be a day for the breakaway two more riders came across from the peloton, Arnaud Demare of FDJ and Julien Simon of Cofidis Solutions Credits. At the 56 mile mark the group now had a 3:25 advantage.

At the bottom of the Cote d'Aspin the breakaway group had exactly six minutes over the peloton. Dan Martin of Cannondale - Garmin was not content to sit in with the main group, trying his luck at bridging across to the breakaway. He used the long climb to tempo his way across, riding 1.5 mph faster than the riders ahead. He eventually replaced Demare in the breakaway who was going backwards. The young FDJ rider suffered up the climb but he would eventually rejoin the group on the back of a great descent.

Dan Martin didn't spend long at the back of the group, approaching the top of the Cote d'Aspin he attacked with 1200 ft to go. Voeckler was the only rider to hold his wheel, but Martin quickly distanced him, and crossed for maximum points. At the top of the category 1 climb, the breakaway group had 7:48 on the peloton and a breakaway stage victory was looking likely. An impressive effort from Dan Martin, riding up the Col d'Aspin at an average speed of 12.4 mph.

Onto the famous climb of the Col du Tourmalet and Demare's return to the breakaway didn't last long, once again being unhitched shortly after starting the climb. Back in the peloton it was the calm before the storm with Team Sky on the front controlling things.

Simultaneous moves were made in the breakaway and the peloton halfway up the climb. In the breakaway Majka attacked, and had no trouble riding away from everyone, while back in the peloton Astana Pro Team came to the front and turned up the heat. They quickly stretched the field in what was a similar scene to yesterday, riders being shelled off the back in big numbers, and in no time at all there were only 30 riders left.

With 2.5 miles to go in the climb Nibali found himself at the front setting the tempo having run out of team mates. 14 riders were left and it was once again the Sky train calling for tickets. The three remaining Team Sky riders of Richie Porte, Geraint Thomas and Chris Froome making it look easy.

Majka crested the Tourmalet with a 5:37 advantage over the remaining 14 riders, and was better than a 50/50 chance of taking the stage victory.

The race was virtually neutralized on the descent, Majka's advantage remaining at 5:37 and no attacks coming from what was left of the peloton.

With 6.2 miles to go in the stage Majka was holding a one minute advantage over Pauwels in second place and a two minute advantage over Martin and Buchmann. The peloton had conceded the stage win, now 6:13 behind the leader. Porte was the pilot of the peloton, doing 100% of the work on the front, keeping the pace just high enough to blunt any attacks, but not to put himself into the red.

The final climb of the day, the Cote de Cauterets, was neither long enough or steep enough to cause a major shake up on the stage result or the GC order. Dan Martin continued his strong showing, passing Pauwels with 2.5 miles to go, and moving into second place.

Rafal Majka won a well deserved stage, making it three stage wins in two years. He also would have raised the spirit of his Tinkoff - Saxo team after their disappointing result yesterday.

Back in the race Bauke Mollema of Trek Factory Racing attacked the main group with 2.5 miles to go trying to gain some time. His attack caused a reaction and another psychological blow for Nibali. The shark once again dropping his head and giving up the chase before it had begun. Tony Gallopin of Lotto Soudal was another to jump from the group in an attempt to gain some seconds. After letting Mollema go, Geraint Thomas did the job of pulling back Gallopin. Mollema was able to pick up 10 seconds on the remainder of the elite group.

Another tough day in the mountains, only to be outdone by tomorrows stage which comprises of one category 2 climb, two category 1 climbs and finishing up with the HC climb of the Plateau de Beille. A total of 6609m elevation is sure to test the legs.