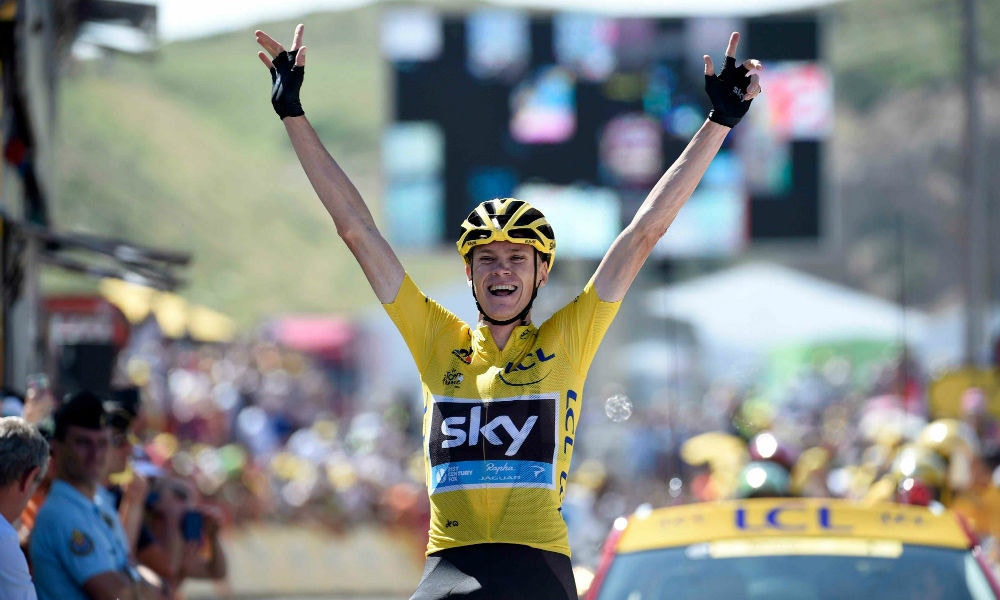 For all the drama of week one, it was nothing compared to the show Team Sky put on today. They finished with first and second on the stage, the yellow and polka dot jerseys as well as the lead in the team classification. Froome destroyed his 'competition' and may well have just ridden away with the 2015 Tour de France.

It was fitting that on Bastille Day a lone French rider would break away. Pierrick Fedrigo of Bretagne-Seche Environnement moved clear at the 4.4 mile mark but unusually he was alone. There were many counter attacks but none of them stuck and Fedrigo quickly found himself opening up a gap of over five minutes. Kenneth van Bilsen of Cofidis Solutions Credits then decided to try his luck, he too breaking clear on his own, and spending the next 19 miles trying to catch Fedrigo.

The pace over the first hour of racing was the quickest of the tour so far, the two riders out in front averaging 28 mph. The hard work from van Bilsen to bridge across was rewarded on the first of four KOM opportunities for the day. He crested the short Cote du Bougarber ahead of Fedrigo, picking up one point in the KOM classification. The two breakaway riders were given a lot of time and space. With 53 miles to go they had a 14 minute lead.

The second KOM opportunity for the day was up the Cote de Viellesegure, another short punchy climb, 1 mile in length at an average gradient of 5.9%. Fedrigo wasn't interested in contesting the KOM point and allowed van Bilsen to again cross in first position. Perhaps the Frenchman was eyeing off the brutal final climb up La Pierre-Saint-Martin.

With 31 miles to go the peloton had decided that it was time to pull in the breakaway. Former hour record holder Alex Dowsett from Movistar did a huge amount of work, cutting the time gap down to ten minutes. FDJ were the next team to come forward to continue the chase, knocking the time gap down another two minutes in only 6 miles.

With just over 25 milesleft in the stage the breakaway still had a six minute advantage leading into the only intermediate sprint of the day. The Frenchman Fedrigo got some reward for his day out in front, crossing first, picking up maximum points and some prize money.

Back in the peloton the sprint train of Giant - Alpecin began the lead out headed up by John Degenkolb, with green jersey wearer Peter Sagan of Tinkoff - Saxo on his wheel, followed by Andre Greipel of Lotto Soudal and Mark Cavendish of Etixx - Quick Step. Giant - Alpecin had pushed the pace to 34 miles approaching the line, but it wasn't fast enough for Greipel who launched early and caught everyone off guard. Cavendish followed his wheel but couldn't make up the ground he had lost, while Sagan got caught napping and trapped himself behind Degenkolb. Greipel's early jump was enough to get him the points over Cavendish and Degenkolb. Sagan's brief lapse of concentration would cost him the green jersey, losing six points to the Gorilla and falling to second in the sprint leader classification.

Kenneth van Bilsen would make it three from three KOM competitions on the stage, cresting the Cote de Montory first. He and breakaway compatriot Fedrigo's advantage had been cut down to just under five minutes with 15.5 miles to go. The bad news for them was it was all uphill from here, and the peloton were charging to the foothills of the climb.

The final climb was a new one for the Tour, La Pierre-Saint-Martin is 9.3 miles long at an average gradient of 7.4%. You would think that would strike fear into the hearts of the peloton but it had the opposite effect. Coming off the the rest day the teams raced to the bottom of the climb aided by a slight tailwind. As soon as the climb started riders were shelled off the back in huge numbers.

Movistar continued their aggression, pacing the initial stages of the climb at a punishing tempo, quickly catching the breakaway and hurting the majority of the peloton.

Big name riders were unceremoniously shot out the back. Romain Bardet and Jean Christophe Peraud (who was second last year) of AG2R La Mondiale, Rui Costa from Lampre - Merida, Andrew Talansky and Dan Martin from Cannondale - Garmin, and last year's third place getter Thibaut Pinot of FDJ all dropped within the first 1.9 miles.

LottoNL - Jumbo's Robert Gesink attacked with 6.8 miles to go trying to take advantage of a small drop in pace after the ferocious first few miles.

With 5 miles to go Alejandro Valverde of Movistar attacked and forced Team Sky to chase him down. He went again at 4.4 miles to go, and was clearly trying to soften Team Sky up for a Quintana attack.

Gesink was rounded up and only eight riders remained with 3.9 miles still left in the stage. It was soon to be reduced to three as Richie Porte of Team Sky put in a huge surge and dropped Alberto Contador of Tinkoff - Saxo, Tejay van Garderen of BMC Racing Team and every one else that was still standing.

Not wanting to let Quintana settle, Chris Froome attacked with 6.2km left in the stage, quickly separating himself from Quintana and spinning his legs like a madman.

The time gaps that were opening up were massive. Nibali quickly dropped three minutes, Contador two minutes, van Gardenren fighting but still already down one minute.

Chris Froome was monstering all of them!

With 1.8 miles to go Froome was in the big chain ring and extending his dominance. His lead over Quintana was almost out to a minute and he was riding away with the Tour de France.

Riding under the 1 kilometer banner, and amazingly Richie Porte had recovered and now had Quintana in his sights. A Team Sky one-two was looking likely. Up the road Froome was still driving to the line, crossing solo and having enough time for a salute.

Porte had announced during the week he was leaving Team Sky, and his performance today would have seen his stocks rise dramatically. Not happy to settle for third, he attacked Quintana within sight of the line and crossed in second position, a triumphant day for Team Sky.