Frenchman Romain Bardet (Ag2r La Mondiale) took an emphatic victory at the conclusion of the 215 kilometer Stage 12 to Peyragudes, accelerating away from a select group of GC contenders in the last 100 meters on steep 16% grade.

Colombian Rigoberto Uran (Cannondale-Drapac) was second, with Fabio Aru (Astana) in third. Aru took a four-second time bonus at the line, as Chris Froome (Team Sky) was distanced going into the finish, finishing 22 seconds behind Bardet and 20 seconds behind Uran and Aru, relinquishing his GC lead to the Italian champion.

“It’s my third Tour de France stage win in three years,” Bardet said. “I took my chance. I did a recon of the last part, so I knew it, and I went full gas. I’m happy to be able to finish like that. I controlled my attacks all day until final 200 meters. At the moment, I’ll just enjoy the victory and not worry too much about the classification, we’ve got a long way to go to Paris.”

Aru took a four-second time bonus at the line, as race leader Chris Froome (Team Sky) was distanced going into the finish, finishing 22 seconds behind Bardet and 20 seconds behind Uran and Aru, relinquishing his GC lead to the Italian champion.

“It was a very difficult day, it was rainy, so it was a little bit difficult early,” Aru said. “Team Sky was setting a hard tempo all day. I was concentrating on my general classification, but I threw it all out there at the end. Congratulations to Romain Bardet for beating me at the end, but I’m very happy to be wearing this yellow jersey.”

Aru now leads Froome by six seconds on the general classification, with Bardet in third at 25 seconds. 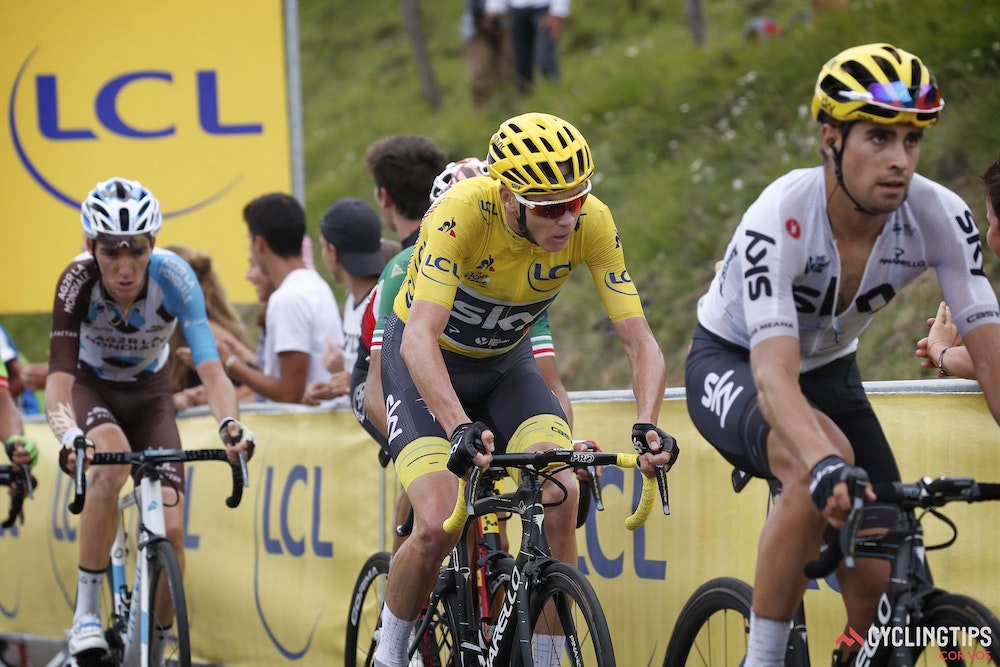 “It was a very, very hard finish,” Froome said. “I didn’t have the legs in the finale, but there is still a long way to go. I just want to say congrats to Romain Bardet for winning a great stage and to Fabio Aru for taking the jersey. I had a bad moment there at the end. No excuses. I just didn’t have the legs in the finale. It’s close. It’s going to be a great fight now all the way to Paris.” 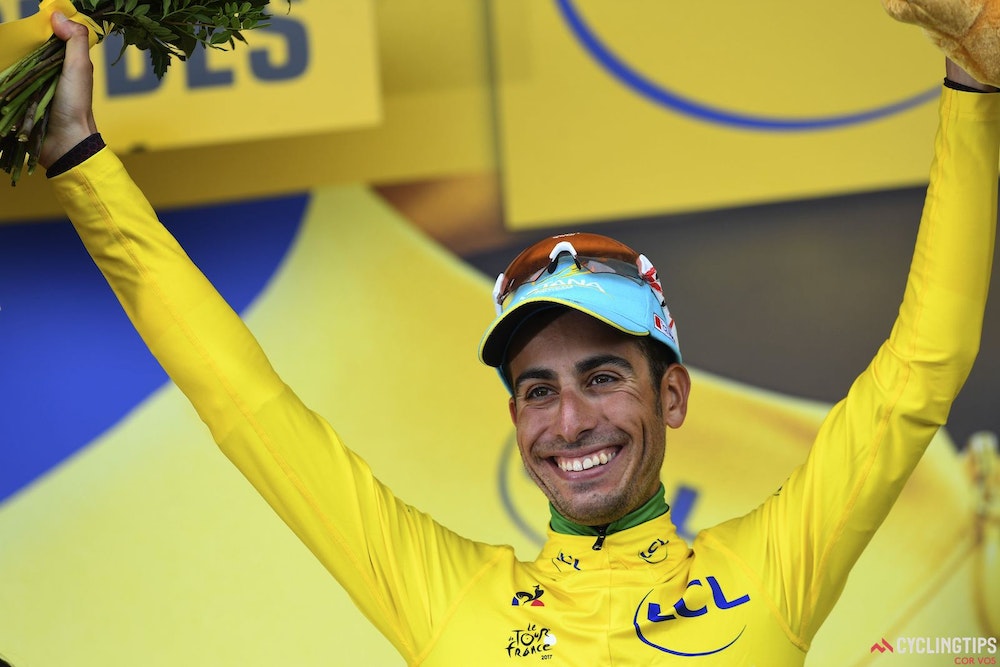 Uran was handed a 20-second penalty for taking a water bottle from a Cannondale employee inside the final 10km, moving him from 35 seconds back of Aru to 55 seconds, though he maintains his fourth-place position on the general classification. Kiwi George Bennett (LottoNL-Jumbo), who finished just behind Froome on the stage, was also handed a 20-second penalty, and sits ninth on GC, at 4:24. Video of Bardet also taking a bottle from a spectator inside the final kilometres apparently did not reach the race jury, as he was not penalized.

Among the biggest losers of the day were Grand Tour champions Alberto Contador and Nairo Quintana. Quintana (Movistar) was unable to hold the pace with 12km remaining, while Contador (Trek-Segafredo) lost contact at the top of Peyresourde with 5km to go; they both finished over two minutes down. Quintana now sits eighth overall, 4:01 back, while Contador is 11th, 7:14 behind Aru.

As always, a spot in breakaway was a sought-after position on Stage 12.

Green jersey Marcel Kittel (Quick-Step Floors) was also in the mix with Michael Matthews (Sunweb) — two sprinters in the move targeting the intermediate sprint 100 kilometers in at Loures-Barousse.

Matthews narrowly overcame Marcel Kittel at the intermediate sprint, receiving 20 points for his efforts. Kittel acquired 17 for second, and continues to hold a comfortable lead in the green jersey competition.

After making sure he scored points at the intermediate, Kittel’s job for the day was finished, and he drifted back to the peloton after cresting the second climb of the day, the Col des Ares, with the breakaway.

THE RACE RESETS ON THE PORT DE BALÈS

The breakaway proceeded to the base of the only HC category climb of the day, the Port de Balès, at 185 kilometers into the day. With just over 40km remaining, the gap to the peloton, led by Team Sky, was four minutes.

De Gendt was the first instigator of pace, accelerating at the front of the break 5km from the top of the Port de Balès. His move drew out Cummings, who caught and passed the Belgian, going solo 3km from the top. The British champion hit the bottom of the Category 1 Col de Peyresourde with a two-minute lead over the yellow-jersey group. 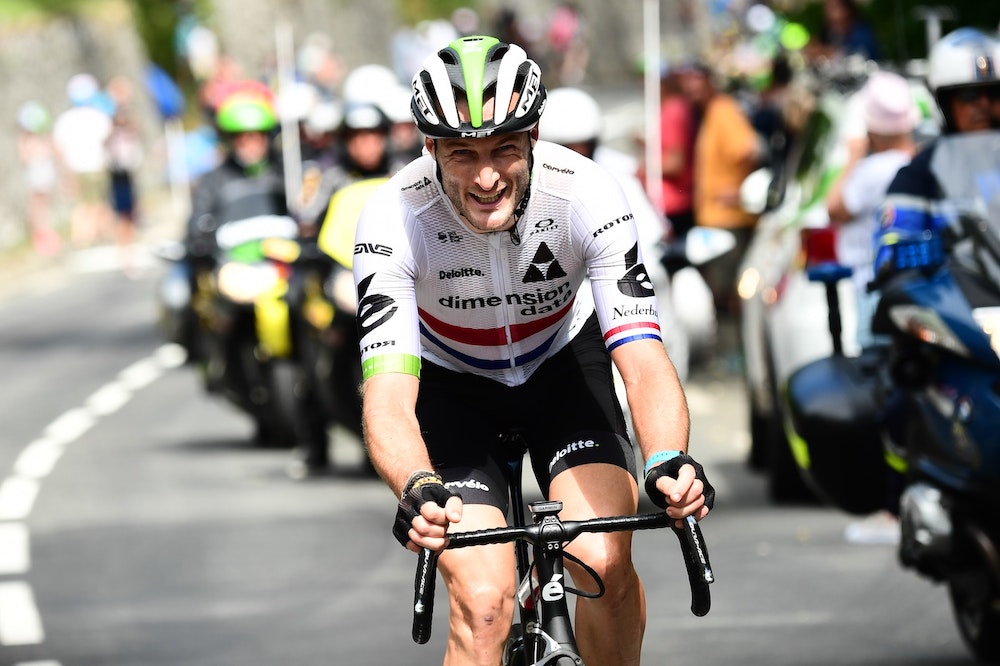 As the peloton hit the bottom of the descent off the Port de Balès, Sky’s Mikel Nieve overshot a corner and went off into the grass, threading the needle between two parked caravans. Froome and Aru followed, and while none of them crashed, all three riders were forced to come to a stop, losing contact with the GC group. A truce was called among the main GC contenders, and Froome and Aru quickly rode back to the favorites on the lower slopes of the Peyresourde.

Landa took over duties in the final kilometres, pushing a pace so difficult attacking appeared impossible. Bennett was first to give it an effort, only to be reeled back quickly. Into the final kilometre Aru attacked, putting Froome into difficulty. Bardet caught and passed Aru, with Iran in tow. Landa left Froome behind, presumably to steal away bonus time at the line, but the Spaniard could only manage fourth on the stage behind the Bardet, Uran, and Aru in that order.