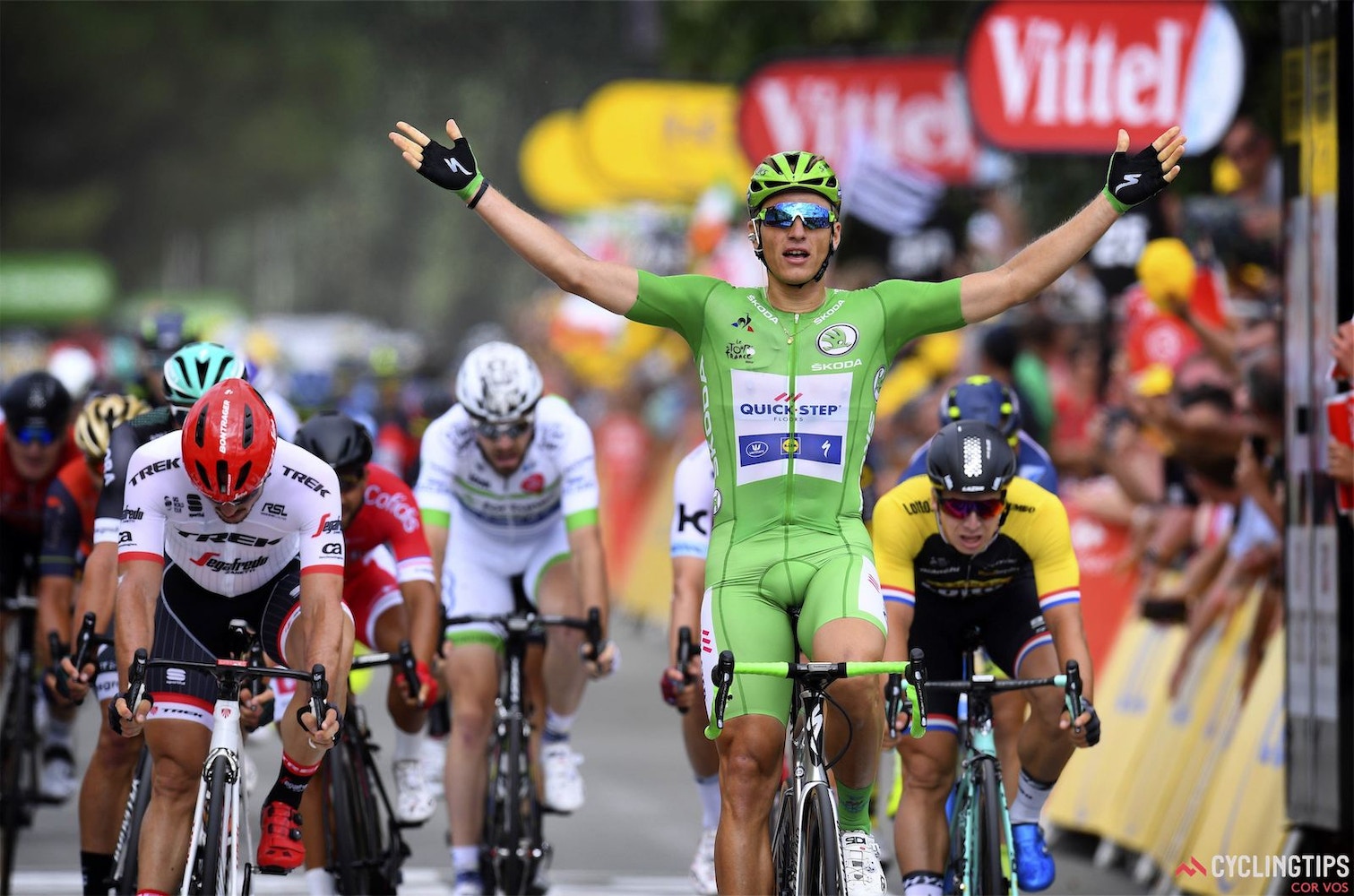 The stage, concluding in Bergerac, was the first flat day after a rest day following a taxing mountainous weekend. Stage 10 marked Kittel’s fourth victory of the 2017 Tour and his 13th overall Tour stage win after his first in 2013, surpassing Erik Zabel with the record number of stage wins for a German rider.

“I think I had a good spot in the sprint, it was still relatively far, about 500m to go after the left corner,” Kittel said. “Dan Mclay started his sprint early, and that was my leadout. I hit the front at exactly 220m to go. I think it’s no surprise to say I feel good at the moment.”

The day after the first rest day, Stage 10 was to be another for the sprinters after a strenuous weekend in the mountains. The course profile, virtually flat, would double as another rest day for the GC men.

“It’s nice after a rest day to not be so crazy, just tick another day off and regain a bit of energy before we hit the Pyrenees,” said GC leader Chris Froome (Team Sky), who finished safely in the bunch. “Tomorrow should be another sprint day. Weather could play a role tomorrow. The time gaps are still very close, the race is still very open. Still a lot of racing to come.”

Among the fast men, however, the fight for the green jersey was heating up between Kittel and Michael Matthews (Sunweb), very different riders with very different skill sets. Matthews, an all-rounder with a solid kick, has the ability to make it places Kittel can’t, as demonstrated by his Stage 8 intermediate points collection. Kittel, however, is the most powerful sprinter in the peloton, all but certain to beat Matthews in head-to-head sprints where they’re both present.

“I think it’s pretty clear that I’m not able to do what Michael can do,” Kittel said at the start today. “He’s a very strong guy on the climbs but that’s not a surprise, he’s shown it before. So I have to score my points on stages like today and in the intermediate sprints to get a really good advantage before we get into the harder stages.”

As he was on Stage 2, Yoann Offredo (Wanty-Groupe Gobert) was again the first aggressor of the day, distancing himself from the peloton within the first two kilometers after the neural rollout. After Offredo rode alone for a few moments, Fortuneo-Oscaro’s Elie Gesbert made the bridge, and there were two out front. The peloton, content to let the two men go, fanned out across the road and allowed the duo’s gap to rise freely.

By 15 kilometers in, Gesbert and Offredo’s gap had dramatically risen to over five minutes. Marcel Kittel’s perpetually dedicated teammate Julien Vermote took the front to keep tabs on the advantage.

“What Julien Vermote does at the head of the peloton is absolutely incredible,” Kittel said. “It shows how strong he is as a rider, physically and mentally. It looks simple but very few riders are able to be as disciplined as him to set the pace according to the speed of the breakaway.” 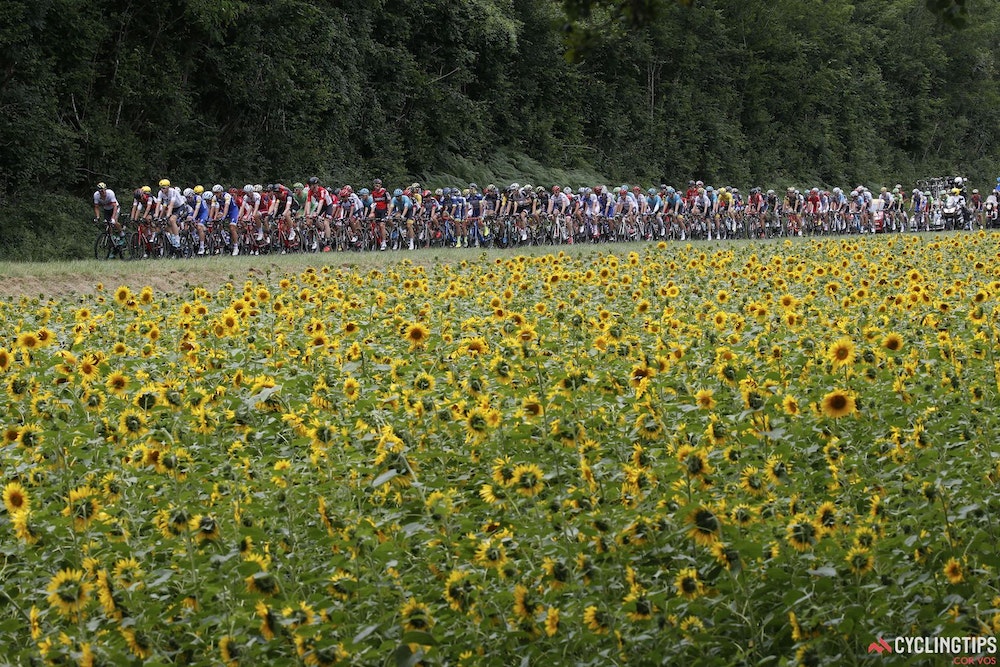 The peloton, in pursuit of the two riders outfront, makes their way through fields of sunflowers on the way to Bergerac.

As solo riders with a margin over the peloton, Gesbert and Offredo were able to collect maximum KOM and intermediate points on the roads from Périgueux to Bergerac. At 100 kilometers in, Gesbert led Offredo over the summit of the Cote de Domme, acquiring 1 KOM point. The duo was clearly more focused on maintaining their margin rather than sprinting for classification points, however, and at the intermediate sprint, Offredo took full points with zero contest. Again, on the second KOM of the day at Cote du Buisson-de-Cadouin, Gesbert led and received another single KOM point for his effort.

In the field, there was substantially more desperation to acquire the remaining intermediate sprint points at Saint-Cyprien. André Greipel (Lotto-Soudal) won the sprint for third across the line, receiving 15 points. Sitting up at the line, Kittel drifted back to fourth, only taking 13 points but still buffering his lead in the green jersey competition. Matthews crossed the line in seventh position and fifth within the bunch, taking nine points.

Offredo and Gesbert’s lead dropped dramatically after Quick-Step, Cofidis, Lotto-Soudal and Katusha-Alpecin began efficiently coordinating the chase with 50 kilometers remaining. With 25 kilometers left, their gap had already dropped below 40 seconds. It was too early, though, and their pursuers took a brief respite, allowing the gap to rise back to around one minute.

Greipel’s Lotto-Soudal was in charge of the chase going into the final ten kilometers. Team Sky, always vigilant, was there also, as margins within the general classification were still tight enough that a small mistake or mechanical on a sprint stage could rearrange things.

With seven kilometers left on the day, the duo out front was caught, and it was an open race. It was an odd mix of riders at the front of the field, with the wide roads seeing GC teams battling the sprinter’s lead-outs for control. Lotto-Jumbo was there as well, in addition to Direct Energie and Katusha-Alpecin.

Lotto-Soudal seemed most organized, however, and confidently led around a sweeping right-hander with five kilometers to go. Greipel sat at the rear of their train.

Kristoff’s Katusha-Alpecin was equally present going into four kilometers to go. The two red trains took control on opposite sides of the road, maneuvering back and forth in an attempt to take control. The pace was rising perpetually into three km’s to go, with Lotto-Soudal still looking the strongest. Quick-Step was entirely absent from the leadout scrum but Kittel, positioned ten wheels back, looked calm and in his element.

Lotto-Soudal led into the final kilometer, their train still looking composed. Greipel looked to be perfectly positioned to take Stage 10.

But, in accordance with his style, Kittel waited for the dense chaos to clear at the front of the field and surfed wheels through the last 100 meters, only meeting the wind after he’d wound up his sprint behind the leaders. He fully opened up and his margin quickly grew, distancing runner-up John Degenkolb (Trek-Segafredo) and third-place Dylan Groenewegen (LottoNL-Jumbo).

Today marks Kittel’s fourth win at the 2017 Tour de France and his 13th overall victory, breaking Zabel’s German record for the most stage wins at the Tour de France.

“I can’t really believe it, it’s number four, that’s an incredible amount of Tour de France wins,” Kittel said. “I can’t believe it, I’m so happy. The team worked so hard, I’m really, really happy. I’ve now won more than any German, I never expected this. I never dreamed to be at the Tour de France, I hoped to be a professional, I never dreamed to be at this level, to have all these wins. It’s hard to imagine.”

Kittel now has a solid lead in the green jersey competition, with 275 points. Matthews retains second, over 100 points back from Kittel, with 173.

“I’m not thinking that I’ve won the green jersey yet,” Kittel said. “Even in Stage 20 something can go wrong. Arnaud Démare is the best example of how the good work done before can be destroyed quickly. Anything can happen at the Tour. But I think I’m in the best shape I’ve ever had since my very first Tour de France.”