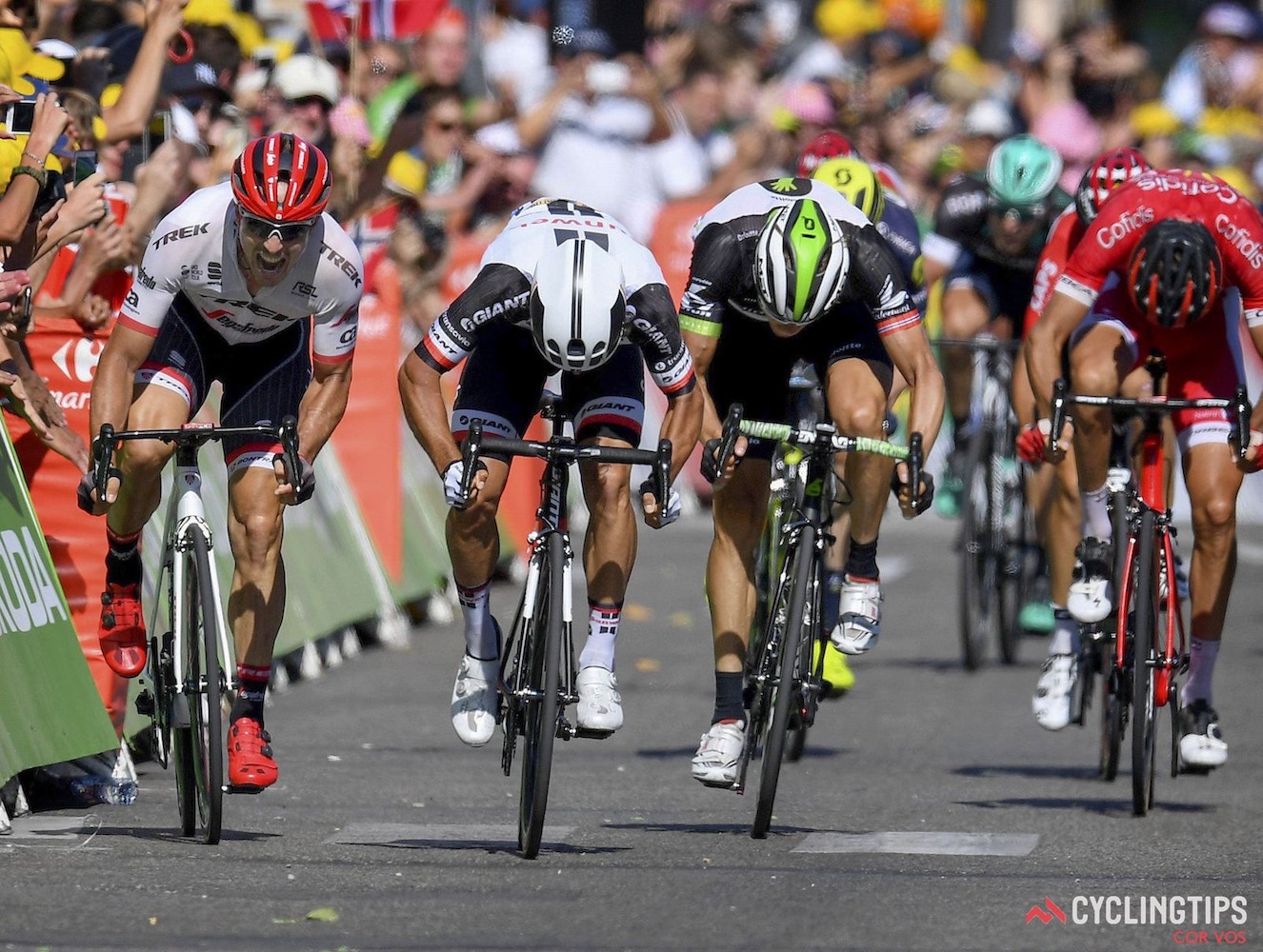 The stage win was contested out of a 32-man group of contenders, having distanced themselves with 13 kilometers to go in the crosswinds. Missing was German Marcel Kittel (Quick-Step Floors), who was dropped early on the stage was also absent from the day’s intermediate sprint, which Matthews won. In all, Matthews took 50 points on Kittel, narrowing the gap in the green-jersey competition to just 29 points with only four road stages remaining.

“To get another stage win in the same Tour de France… normally I can only win one stage in a Tour, to get my second win in three days, I don’t really know what to say.. I think it won’t sink in until tomorrow morning.”

Riders hoping for a casual post-rest day Stage 15 of the Tour weren’t granted the privilege. The stage, afflicted with difficult wind conditions, proved to be significant in the GC battle.

The peloton shattered into fragments with 13 kilometers remaining as Team Sky drove the pace into a critical corner, the wind switching from tail to cross. Riders complacent with their positioning were quickly caught out in the gusts over 50 kph and consistent wind around 40 kph. The general classification teams and sprinter’s teams were perpetually diligent, attempting to keep their men at the front of the field and out of trouble.

The day’s biggest GC loser was Dan Martin (Quick-Step Floors), who lost 51 seconds and dropped out of the top five. 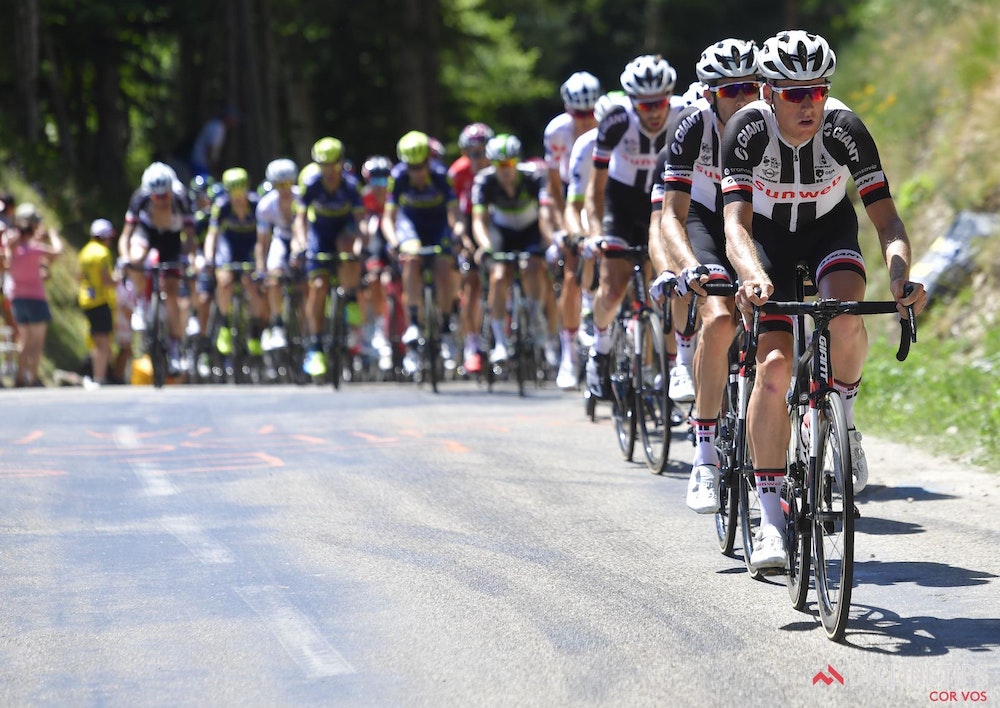 Sunweb was in control of Stage 16 nearly all day.

Team Sunweb, capitalizing on The difficult course, was instrumental in distancing green jersey Marcel Kittel on the first categorized climb of the day, the Côte de Boussoulet. Nacer Bouhanni (Cofidis) was also left behind but impressively bridged the gap back to the main field with the help of teammates Nicolas Edet and Cyril Lemoine.

With 13km remaining, Team Sky’s Michal Kwiatkowski led the peloton through a critical corner as the wind switched from tail to cross. The accelerated pace, along with the difficult wind conditions, forced riders into the gutter with gaps beginning to appear in the field. 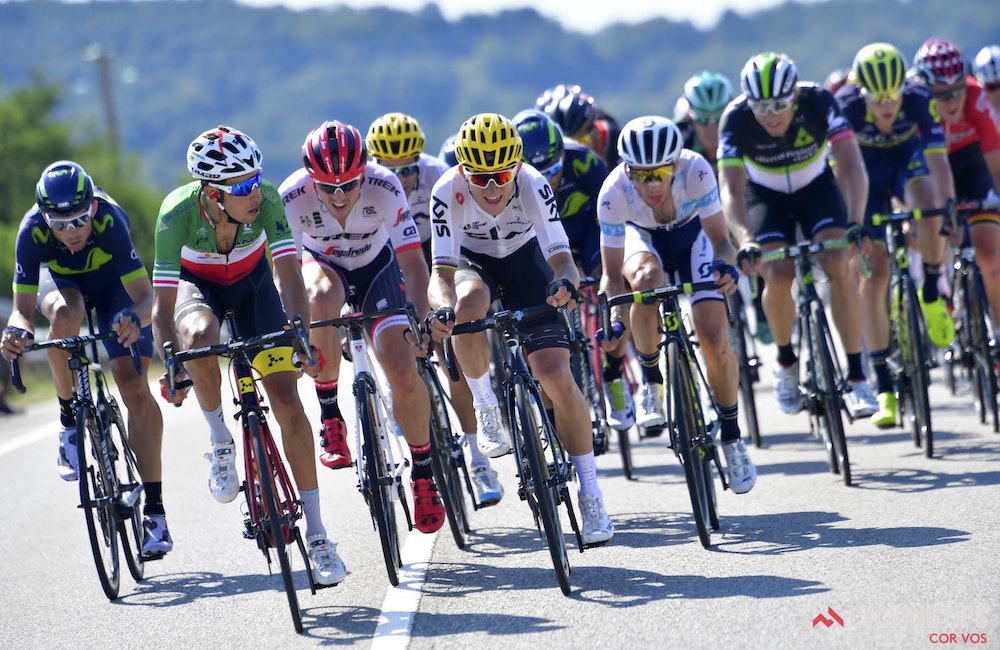 Fabio Aru (Astana) and Michal Kwiatkowski (Sky) at the front of the final selection.

A main group of 32 contenders was able to distance itself from the rest of the field. GC contenders that made the front group included Froome, Fabio Aru (Astana) Simon Yates (Orica-Scott), Romain Bardet (Ag2r La Mondiale), and Rigoberto Uran (Cannondale-Drapac), as well as contenders for the stage win like Matthews, Boasson Hagen, Degenkolb, and Greg Van Avermaet (BMC Racing).

Bordure dans le peloton / Echelon in the... by tourdefrance

Thirty seconds behind, Martin frantically chased in the second group on the road. Teammate Jack Bauer was with him, but their efforts would be in vain. White jersey contender Louis Meintjes (UAE Emirates) was also in the Martin group along with sprinter Andre Greipel (Lotto-Soudal), who would end up missing out on the bunch gallop.

Martin and Meintjes would cross the line 51 seconds back from the Froome group, with Martin drifting from fifth to seventh on the general classification, while Meintjes stayed in eighth overall.

Daniele Bennati (Movistar) made a bold solo attempt two kilometers out from the line, but would be swept up within the final kilometer as the sprint heated up. Matthews had two Sunweb teammates with him in the front group, Nikias Arndt and mountains classification leader Warren Barguil.

Matthews jumped with 200 meters remaining as Degenkolb accelerated around Matthews’ right side. Boasson Hagen had to start his sprint from multiple wheels back but used Marcel Kittel’s tactic of surfing from behind up through the draft, nearly overcoming the Australian puncheur at the line.

“It was a tough stage, everyone knew it was going to split at some point,” Froome said. “I was happy my teammates were on the right side of that. At 20km to go it seemed like the right moment, it was a wide open road and the crosswind was coming from the right. The guys went for it at the right moment, and everything split and opened up. My teammates did a great job, keeping myself and Mikel Landa in the right position for that split.”

“I can’t say I’m happy losing all those points but there was nothing more we could do today,” he said. “Since the beginning, I tried to come across. It is what it is. We’ll continue to fight for the green jersey. The chance for me to win it in Paris is still there.” 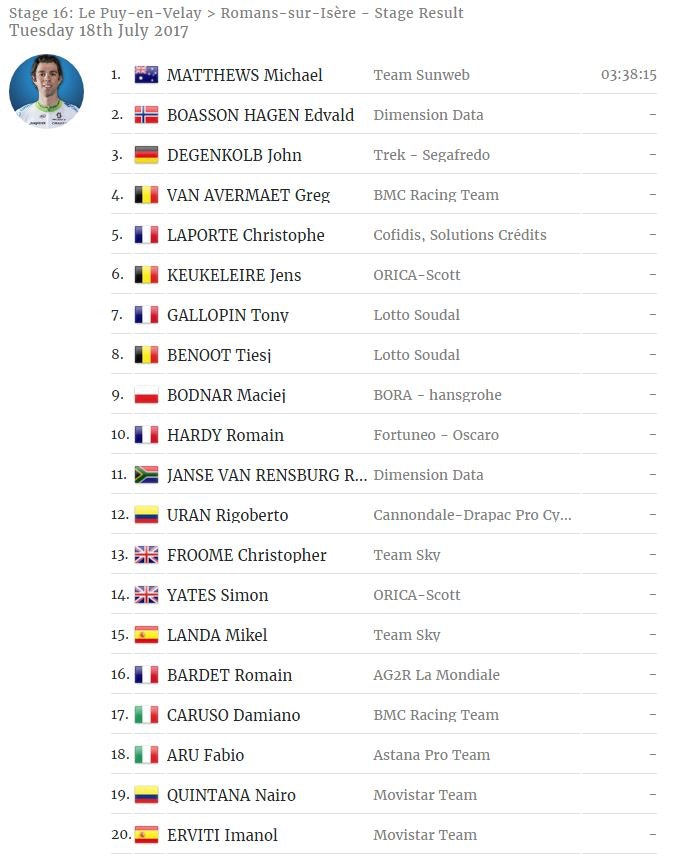