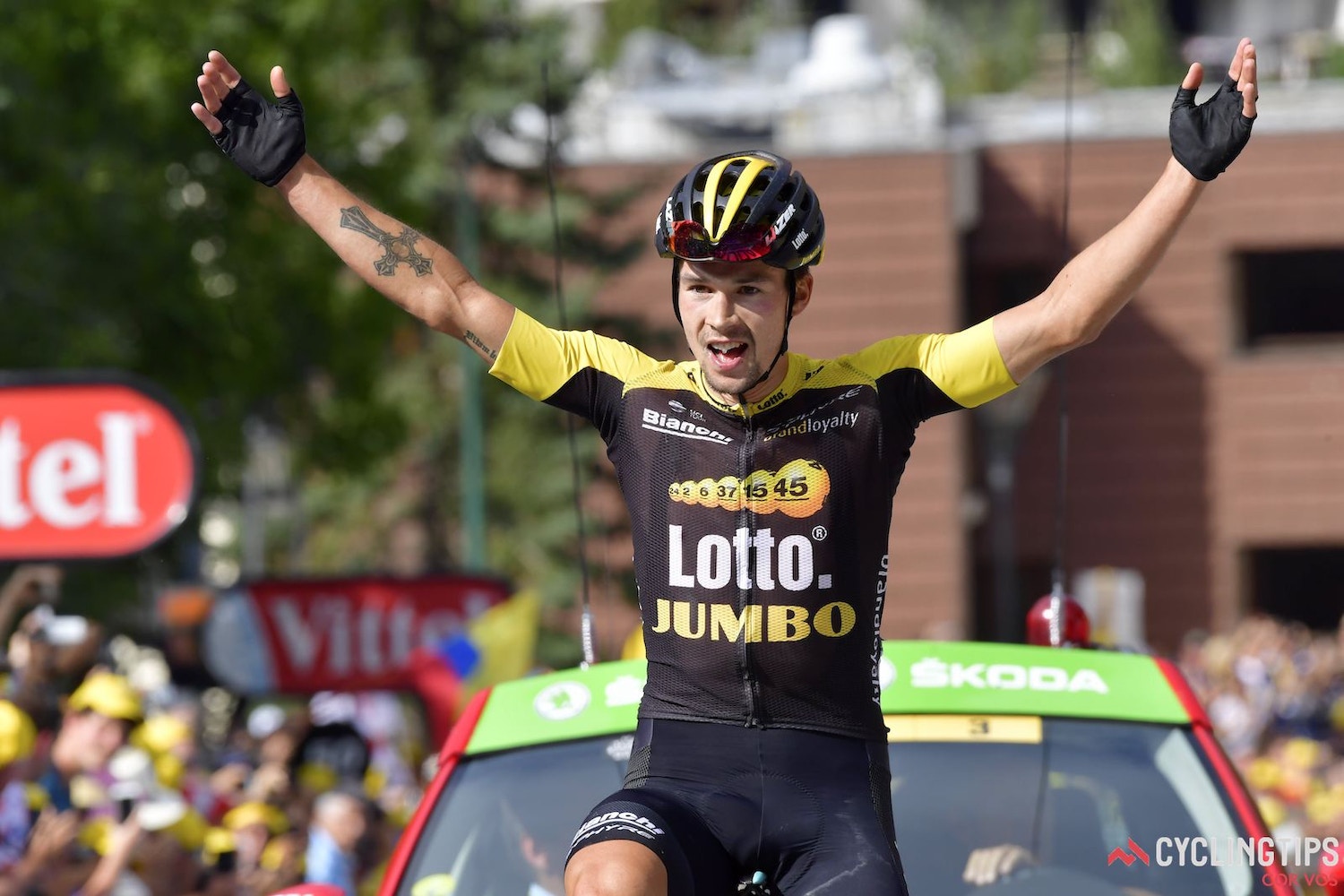 Slovenian Primoz Roglic (LottoNL-Jumbo) overcame an early crash on Stage 17 to solo to victory at the Tour de France Wednesday, riding clear from a breakaway over the Col du Galibier to finish ahead of a fractured group of GC contenders.

The victory helped ease the pain for LottoNL-Jumbo, which had seen frustrating second-place finishes this Tour for Robert Gesink and Dylan Groenewegen, and also seen Gesink and George Bennett abandon the race due to injury and illness.

With the win Roglic, 27, became the first Slovenian to ever win a stage of the Tour de France.

“It’s incredible. There are no words. It’s crazy,” Roglic said. “I can’t describe all these feelings. I decided to go for it. My girlfriend and my family are here today, which was extra motivation.”

“I expected very much a shadow-chasing match between the GC guys today,” Froome said. “That was my mentality over the final climb, to do enough to follow the other guys, but not do too much with tomorrow in mind. It was interesting to see, this late in the game, that some guys are struggling. Fabio Aru was the most noticeable GC contender to lose time, but let’s see what happens tomorrow. It’s the last hard stage of this year’s Tour, a mountaintop finish on the Col d’Izoard. It’s still all to play for.”

On tap was a 183km stage from La Mure to Serre-Chevalier that delivered four categorized climbs, including the HC climbs of Col de la Croix-de-Fer (24km at 5.2%) and the Col du Galibier (17.7km climb at 6.9%), the latter being the highest point of this year’s race at 2,642 metres (8,668 feet). Following the summit of the Galibier was a 28km descent to the ski resort at Serre-Chevalier. In total, the stage delivered around 4,500 metres (almost 15,000 feet) of elevation gain.

The figures on the Galibier are a bit misleading, however, as it almost immediately followed the Cat.1 climb of the Col du Télégraphe (11.9km at 7.1%), with just a short descent separating the two, leading race commentator Robbie McEwen to refer to it as the “Télé-Galibier” climb totaling nearly 30km (18 miles) of climbing.

As is often the case on high-mountain stages, there were battles being contested on several fronts — for the stage win, the general classification, the points competition, the mountains jersey, and the white jersey of best young rider.

In the battle for the green points jersey, Australian Michael Matthews (Sunweb) earned an additional 20 points on rival Marcel Kittel (Quick-Step Floors) by riding into the day’s early breakaway of 31 riders and taking the day’s only intermediate sprint point, at Allemont, 47km into the stage.

Kittel, who had been caught up in a crash 20km into the stage that also took down Steve Cummings (Dimension Data) and Warren Barguil (Sunweb), did not ride into the breakaway and earned no points; the difference between Matthews and Kittel was just nine points with three road stages remaining.

That fact became moot, however, as Kittel abandoned the race on the Croix-de-Fer, succumbing to injuries sustained in his crash.

CONTADOR GOES CLEAR ON THE CROIX-DE-FER

Starting the day 11th overall on the general classification, 6:16 behind Froome, Contador set out to redeem his Tour de France — possibly his last — with a stage win.

Protecting the KOM jersey of his teammate, Matthews took first atop col d’Ornon, ahead of De Gendt; the pair held a 25-second lead over the breakaway. Shortly after, following the descent of the Col d’Ornon, Matthews took the intermediate sprint in Allemont. The pair stretched out their lead to almost two minutes at the bottom of the Croix-de-Fer.

Pinot, a two-time stage winner who finished third overall in 2014, would soon abandon.

Sensing it was the moment to go, Contador attacked, drawing out Quintana. However the Colombian struggled to hold the pace, and while Contador initially waited for Quintana, he ultimately would go it alone. Soon after, Gogl would drop back and pace the Spaniard up to the Mollema-Roglic group.

After Navarro bridged across to Matthews and De Gendt, the Australian lost contact with the leaders before the top of the Croix-de-Fer, where De Gendt took maximum KOM points nursing a 3:22 lead over the yellow jersey group and just a scant 20-second lead over the chase group led by Pantano.

At the base of the “Télé-Galibier” climb, Pantano peeled off, his job for Contador done. Mollema, stage winner on Sunday, took over full responsibility for Contador. The same went for De Gendt, who found Mollema’s pace too much to handle.

Soon after Contador required a bike change due to chain issues, costing him about 40 seconds. While Bettiol upped the pace in the breakaway, Mollema dropped back to pace Contador back.

Behind, Vasil Kiryienka peeled off the front of the yellow jersey group, his job done for Team Sky. With Michal Kwiatkowski taking over for Froome, the gap between the maillot jaune and the breakaway hovered around 3:30.

Over the top of the climb Roglic, who started the day a distant second to Barguil in the KOM competition, took 10 KOM points, followed by Mollema, Pauwels, and Contador.

In the yellow jersey group, Orica-Scott’s Daryl Impey took over pacemaking, looking to protect the GC position of Simon Yates, who started the day sixth overall, 2:02 behind Froome. 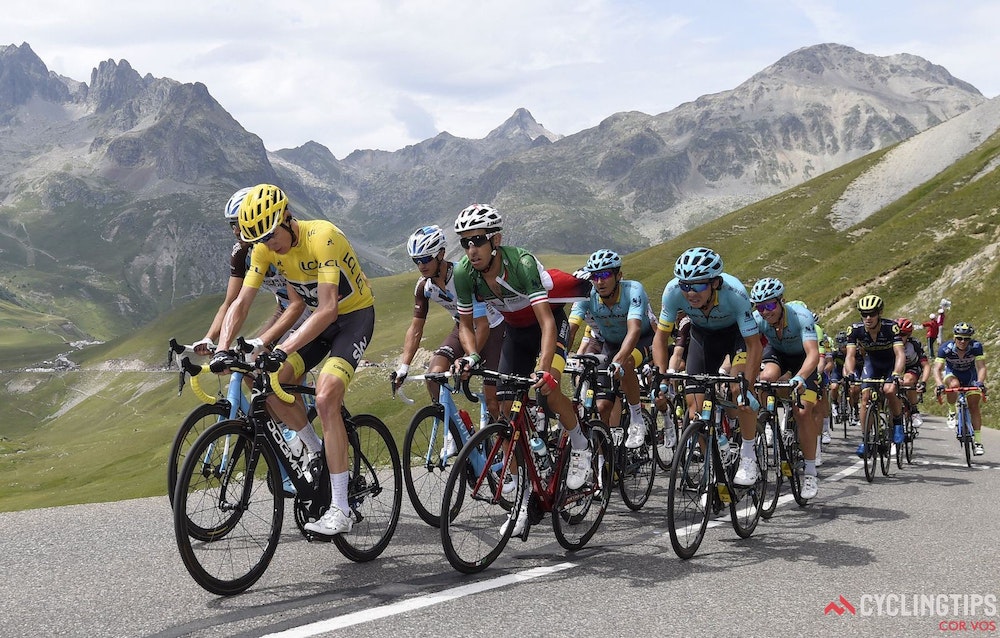 The GC group on Stage 17 of the 2017 Tour de France, from La Mure to Serre-Chevalier.

After the short descent off the Télégraphe onto the Galibier, Roglic attacked, drawing out Contador and Pauwels go with him. Mollema peeled off, job done for his team leader. Atapuma and Frank bridged across, however Atapuma struggled shortly after.

Behind, Kwiatkowski continued to pace the 14-rider yellow jersey group ahead of Nieve, Landa and Froome.

As the pace in the Contador group slowed, Navarro bridged across, making a six-rider group at the front: Roglic, Pauwels, Contador, Atapuma, Frank, and Navarro. Pauwels was next to up the pace, at Plan Lachat with 8km left on the Galibier, and 36km remaining to the finish.

Dan Martin (Quick-Step Floors) was first to attack from the GC group. Because Martin started the day seventh overall, 2:03 down, there was not an immediate reaction from the group of favorites. While Kwiatkowski drove the pace, Nieve struggled at the back of the bunch. Froome sat third wheel, with Aru glued to his wheel.

Up ahead, Roglic went clear 6km from the summit while Contador looked to Pauwels to chase. After riding with Contador and Pauwels, Atapuma jumped away to chase down the Slovenian.

Kwiatkowski was the next Sky rider to peel off the yellow jersey group, leaving the work to Landa, who slowly reeled in Martin.

Once Martin was brought back, Barguil counterattacked the GC group, opening a slight gap.

Bardet was next to attack from the GC group, with Froome following and Uran on Froome’s wheel. Martin closed the gap, with Landa on his wheel. Aru was slow to react, trailed by Louis Meintjes (UAE Team Emirates) and Yates. Once reeled in, Bardet attacked again, and while Froome, Uran, and Landa were able to respond, Aru was again put into difficulty.

Martin was next to attack, bringing the group up to Barguil. Froome chased it down, but as soon as Froome swung off to look back, the Irishman attacked again, and again Aru and Meintjes were put into trouble.

Around 2.5km from the summit Barguil was next to attack, in search of KOM points and in hopes of moving into the top 10 on GC.

At the summit of the Galibier, Roglic took 20 points in the KOM competition and held a substantial gap over Atapuma. Barguil caught and passed Contador before the summit, finishing third over the top ahead of the maillot jaune group.

Though Barguil has not yet mathematically secured the overall victory in the King of the Mountains competition, the Frenchman is close; he has an advantage of 49 points over Roglic with 58 points remaining up for grabs in the three road stages that remain.

THE DESCENT TO SERRE-CHEVALIER

With Aru and Meintjes in difficulty, Barguil and Bardet linked up at the front of the chase group and attacked the descent of the Col du Lautaret, with only Froome and Uran able to follow, 1:30 behind Roglic. Aru and Meintjes chased together, with Yates and Martin further behind.

Landa latched onto the Froome-Uran group to make five in the first chase group, while Atapuma dropped back to ride with Meintjes. With Contador and Pauwels also there, as well as Martin, Aru’s chase group, 15 seconds behind, grew in numbers.

With 12km remaining, Roglic held a 1:20 lead over the yellow jersey group, while the gap between that group and Aru’s chase group had grown to 28 seconds.

Roglic finished the stage 1:13 ahead of Uran, with Froome in third.

“I expected Uran and Bardet to be there,” Froome said. “I didn’t expect Aru to lose time, that was the biggest surprise. Once again, I have to thank my teammates. They really emptied themselves today, each and every one of them, to make sure I was safe until the final. I’m really happy with how the day panned out.” 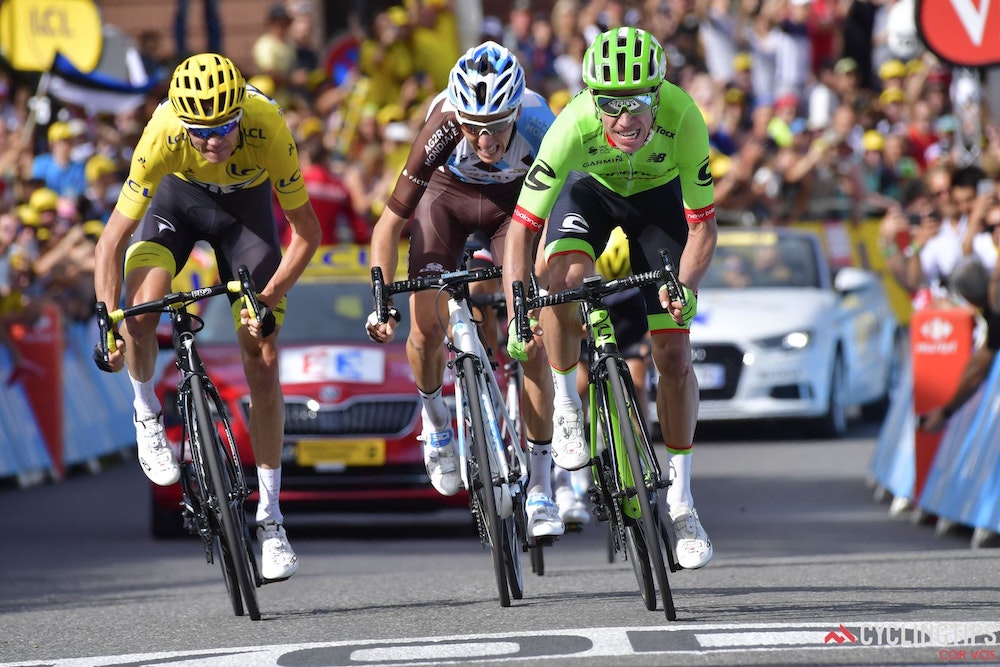 Uran (Cannondale-Drapac) won the bunch sprint for second ahead of Chris Froome (Team Sky) on Stage 17 from La Mure to Serre-Chevalier. 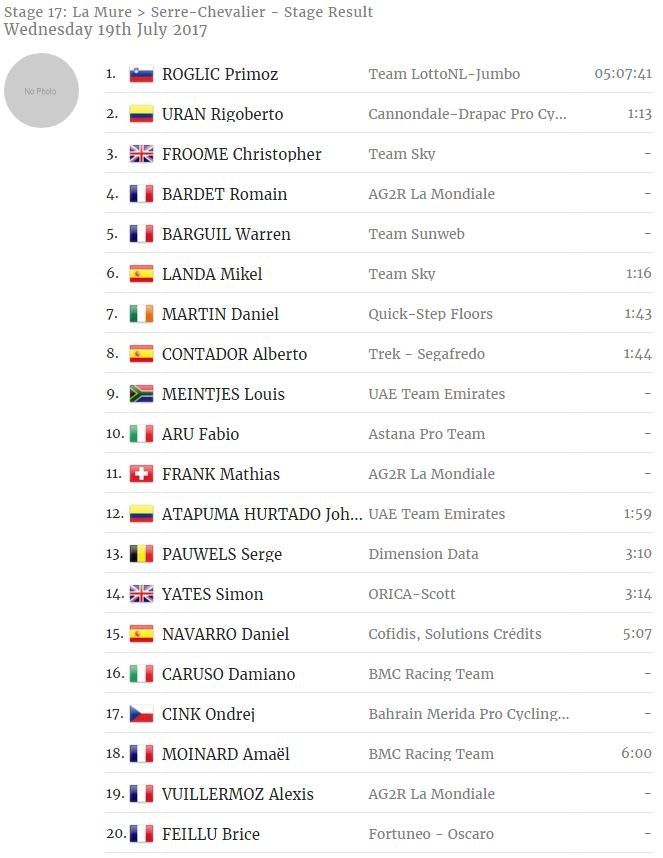