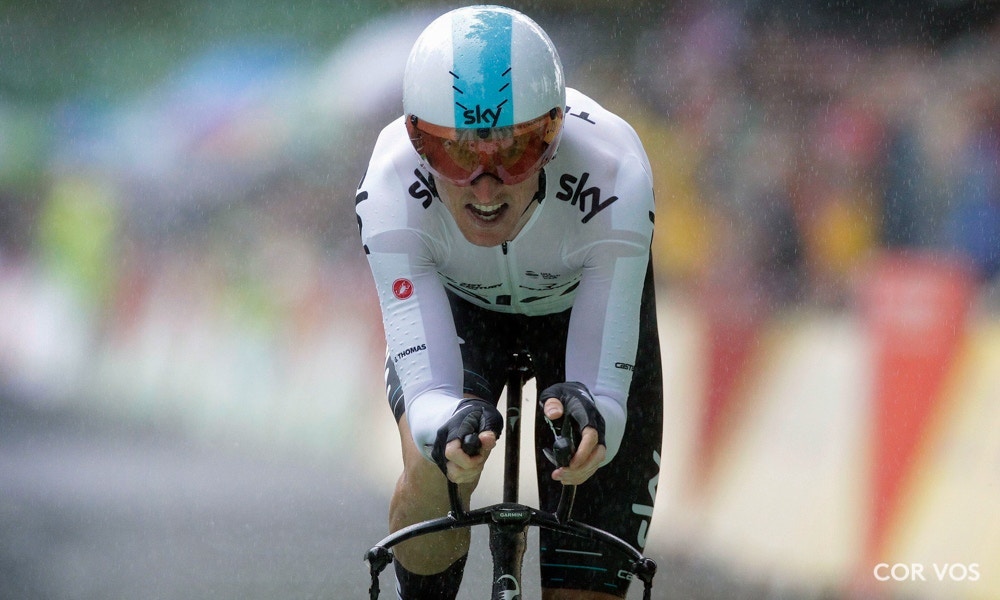 Six weeks after he was forced to abandon the Giro d’Italia while contending for overall victory, Team Sky’s Geraint Thomas is the first race leader of the 2017 Tour de France.

“It’s an amazing feeling,” he said. “I didn’t even think about [winning], to be honest. I was super-relaxed coming here. I didn’t believe it was going to happen. I thought [Tony Martin] is going to beat me, or someone is going to beat me, but it’s an amazing feeling. I had my fair share of bad luck this year. Also, back home, the last month hasn’t been great, or this year really, so it’s amazing to get this win. It’s a great day.”

With his second-place finish, Küng was awarded best young rider on his Tour de France debut, like his Swiss compatriots Alex Zülle, in 1992, and Fabian Cancellara, in 2004.

“It’s a little disappointment to not win but Geraint Thomas was the strongest,” Küng said. “I was ready for today. I prepared a lot for the Tour since the beginning of the year. The conditions were difficult on a wet city-course like that. I tried my best. It was a bit difficult for Richie Porte because he was in a car following one of our guys who crashed. He was for sure holding a little bit back. But it’s better to lose some time here, get through safely instead of ending your Tour here. It’s sure these guys are going to do amazing stuff in the next three weeks. Personally, I’m glad to have the white jersey. It gave me goose bumps to be on stage even if it wasn’t for the win but my priority in the next three weeks is to keep Richie up there through the first week.”

Quintana will likely be more upset by the loss of teammate Alejandro Valverde, who crashed heavily in a slick corner and was forced to abandon with what was later revealed to be a broken left kneecap.

Another Spanish GC rider, Jon Izaguirre of Bahrain-Merida, also crashed heavily on the same corner as Valverde and was also forced to abandon.

The 14km lollipop loop along the Rhein River was saturated with rain from early in the day, making the corner-heavy nature of the route a challenge. The wet tarmac added a hugely technical aspect to the normally benign, short effort. Riders took corners tentatively, and several still hit the deck.

Roche spoke about the technical nature of the course and the conditions.

“It’s a city center prologue,” he said. “The roads are a bit greasy. The rain doesn’t help. I’m not sure if there was a bit of oil or if it was the tram tracks because I fell where the tram tracks were. It’s a bit disappointing. I was hoping to do a good prologue. That’s how it is. For riders going for GC, it’s an important time trial. Thirty or forty seconds can be lost there. We know there won’t be many mountain tops in this Tour. So it’s very important to do a good TT today and in Marseille. It’s about doing the maximum effort but staying upright.”

Matteo Trentin (Quick-Step Floors) set an early fastest time of 16:14, but Kiryienka, the 2015 world time trial champion, came in faster, at 16:11. Sky’s dominance was affirmed after Thomas one-upped his teammate’s time with a 16:04, going into the top spot.

Despite high hopes to take yellow in his home country, Martin crossed the line in 16:12, putting him behind Thomas and Kiryienka with multiple riders still on the course.

“I’m sorry about the rain but it’s what everybody’s saying after this race,” Martin said. “I lost eight seconds to Geraint [Thomas], I have to analyse what went wrong. The support was amazing. It was such a big motivation for me. I could not hear my radio, it was so loud with everybody shouting for me. It’s the big thing I will take in from this stage. There are still two weeks to go and still a few goals to reach. In the last 2km I missed a bit of power but that’s normal in such a short TT. You give it everything from the start and see how far you can go.”

Porte also had a bit of a disappointing ride, seemingly shaken after watching Roche’s crash from the team car.

“I stayed super cautious in those corners,” Porte said. “I followed Nicolas Roche in the car but he was not the best guy to follow today, I was super nervous but it was a great start to the Tour. I’m a little disappointed but the main thing was to come through without crashing. It was pretty slippery out there. It was hard sitting in the bus and seeing the other guys crash. It made us try to come through without crashing. It was a hard little time trial, dead flat. But those corners and lines you try to avoid them and it’s quite a mental game.”

Froome rolled down the start ramp as the final rider on course, his race number emblazoned with the “1” of the defending champion. Earlier in the day he had ridden in the team car following teammate Michal Kwiatkowski’s ride. His intention was to gauge the proper speed to carry around the soaked corners, but despite his diligent recon, he wouldn’t be able to overtake Thomas’ time.

Still, Froome’s time of 16:17 was good enough for sixth on the day, distancing many of his GC rivals. And with Kwiatkowski finishing eighth, 15 seconds behind Thomas, Team Sky has four riders in the top 10, while Movistar faces a significant GC deficit and the loss of their most experienced Grand Tour rider. 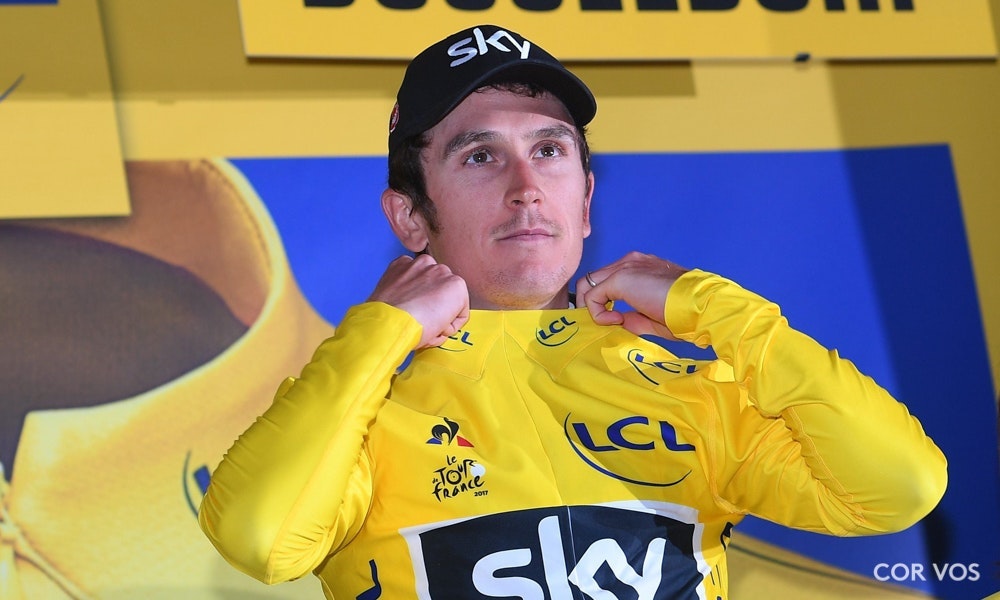 Geraint Thomas took yellow and Team Sky put four riders in the top eight on the opening day of the 2017 Tour de France, a wet time trial in Düsseldorf, Germany.