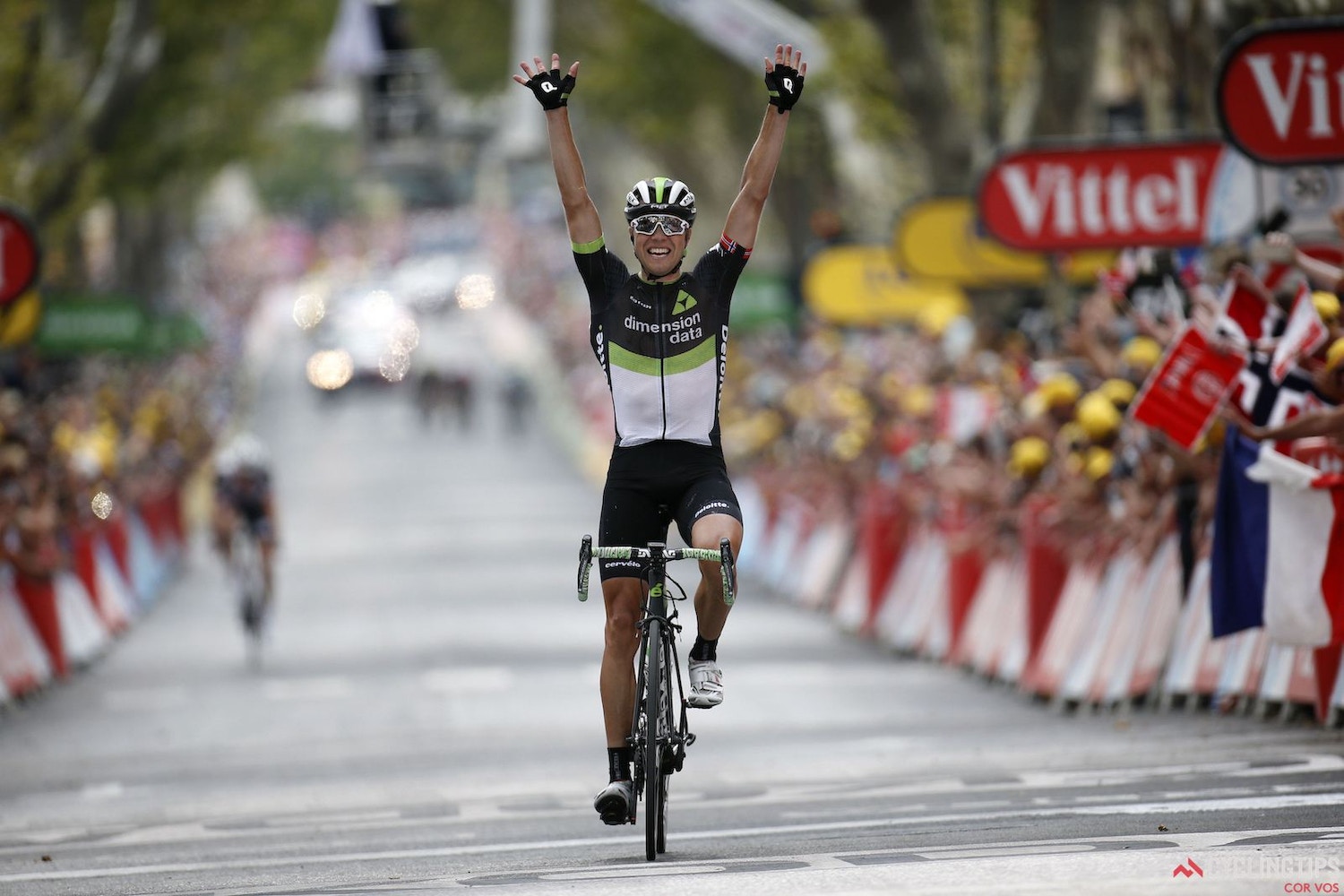 After a pair of second-place stage finishes, including one decided by a photo finish, Edvald Boasson Hagen (Dimension Data) finally took a stage win at the 2017 Tour de France on Friday, holding off Nikias Arndt (Sunweb) and further behind, a frantically chasing breakaway which he distanced himself at 2.8km out to ride alone for the victory in Salon-de-Provence. Jens Keukeleire (Orica-Scott) won the sprint from the remnants of the breakaway to take third.

Boasson Hagen was desperate for a stage win this Tour after multiple narrow misses saw him take second on Stages 7 and 16 and third on Stages 11 and 14.

The Norwegian praised his team’s early work on Stage 19. “I’m really happy, the team did really well before we got away in the break, they were controlling the group, then on the climb [Col Lebraut] the breakaway went away. We rode well together all day, and then in the final 2km I made an attack, and no one could follow. I’m so happy, I’ve been so close, so many times.”

Stage 19 would be the final chance at an open race for the riders in the 2017 Tour de France. Saturday’s time trial in Marseilles, and Sunday’s stage to the Champs-Élysées (customarily a field sprint), meant that Stage 19 was the final opportunity for a group off the front to have a chance at victory.

From the early kilometers, it seemed like every rider who’d missed out on a stage win this Tour desired to be in the move of the day. That would hold true as ultimately, at kilometer 33, a large group of 20 would finally roll, following an initial move of Stage 8 winner Lilian Calmejane (Direct Energie) and Elie Gesbert (Fortuneo-Oscaro).

Team Sky, controlling the field behind, had stated early their intentions were to let the break go. The highest placed GC rider in the move was Mollema at 47 minutes down from yellow jersey Froome. As a result, the breakaway’s margin increased quickly and substantially, their time gap heading straight to seven minutes and hovering between seven and 10 minutes for the majority of their journey to Salon-de-Provence.

The breakaway worked well together, but it was clear, due to the composition of riders within, that they wouldn’t go to the line as a unit. The first attack from the large selection came at 60km to go, but nothing would be successful until 20km from the line when Orica-Scott’s Keukeleire and Albasini took turns with attacks from the front.

The final, it appeared, would come down to the 10 riders who had distanced themselves from the original 20. Included was Bakelants, Bennati, Albasini and Keukeleire, De Gendt, Arndt, Chavanel, and Gesbert.

The final ten kilometers emulated the flat run-in of a spring classic, with incessant attacks flying up both sides of the road. Heading into a roundabout at 2.8 kilometers from the line, Boasson Hagen abruptly cut to the right side of the traffic island on the lead-in. Arndt followed while the remaining eight stayed to the left side. Accelerating slightly through the roundabout, Boasson Hagen and Arndt had a gap upon exiting. Boasson Hagen had done his research on the finale of Stage 19, seeing an opportunity for a shorter and therefore faster line through the roundabout.

He capitalized on his knowledge of the finish, and only Arndt followed, ultimately being slightly distanced.

“I think we took the right moment, we went on the roundabout on the right side and we could get a small gap but then he goes straight away and sprints over me,” Arndt said. “I didn’t expect that and I was also not strong enough to accelerate with him so that’s how he got a gap. I couldn’t close it again. I know he is one of the fastest sprinters here in the Tour, so I actually wanted to come alone to the finish, but he also took the right moment at 3km and then you saw that he already had a really good punch, how he accelerated there. That was impressive. He was just super strong today.”

Boasson Hagen stretched his gap out through the remaining two and a half kilometers and took the win alone. Arndt crossed the line five seconds behind Boasson Hagen, able to hold off the charging breakaway remnants by ten seconds.

“I could have waited for the sprint, but I was feeling quite good, and I felt I could win with one attack,” Boasson Hagen said. “I opened a big gap and was able to cross the line alone, I didn’t have to wait for a photo finish, I’m really happy for that.”

After an easy day in the field, well protected by his team, Froome retains yellow heading into tomorrow’s individual time trial.

“Today was a good opportunity for us GC guys, after a tough time in the Alps, to regain a bit of energy, and sit on the wheels ahead of tomorrow’s time trial.” Froome said. “It’s a fast course, there’s a small climb out the back of Marseille, I think it suits me well. It’s quite a power time trial, I think someone like Roglic or Tony Martin could be fighting for the stage win. I do think at this point it’s my [GC] race to lose, I just have to make sure I do everything right, follow all the right processes, and hopefully not have a bad day. If I have the legs, everything else should be right.” 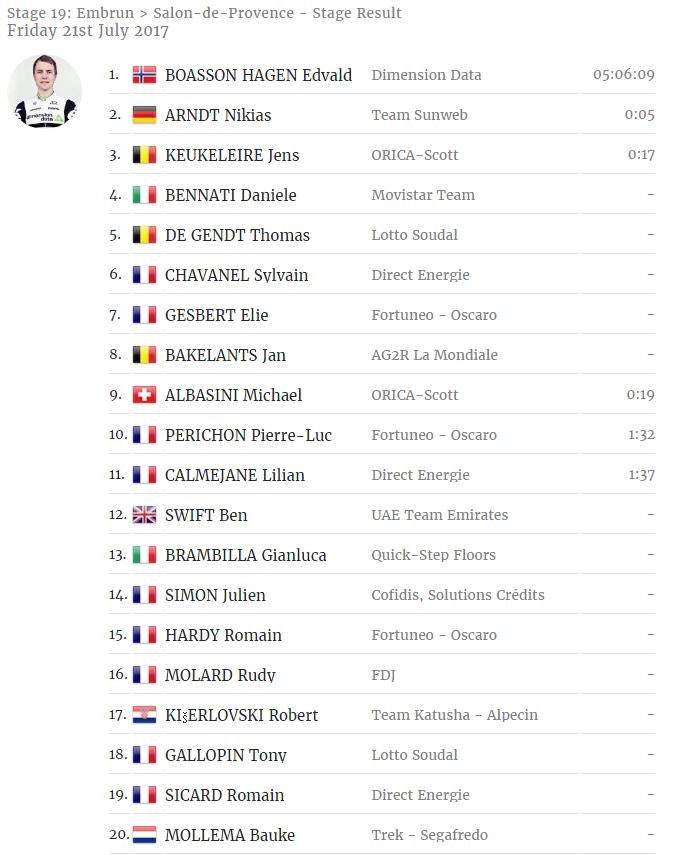